Ballot initiatives for the November election faced a 5 p.m. Wednesday deadline with the Michigan Secretary of State and an even tougher requirement: 347,047 signed petitions.

However, a group behind one ballot effort still more than 100,000 signatures short will argue in federal court that it should be offered relief from the state's signature requirements and deadline, given the difficulties in gathering signatures during a government-ordered stay-home edict.

The group looking to turn the Michigan Prisoner Rehabilitation Credit Act into law and restore "good time" credits to the prison system has filed a federal lawsuit seeking relief. 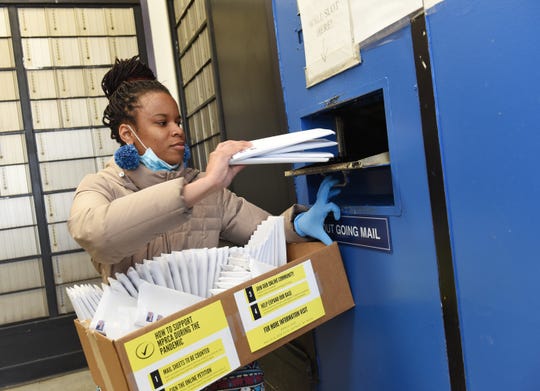 Amani Sawari, 25, drops off petitions in the mail at Lathrup Village Post Office to supporters for a ballot initiative to restore "good time" credits to the prison system for early release of prisoners. (Photo: Clarence Tabb Jr., The Detroit News)

It names Gov. Gretchen Whitmer, Michigan Secretary of State Jocelyn Benson and Jonathan Brater, director of Michigan's Bureau of Elections, in their official capacities, as defendants.

The temporary restraining order request accompanying the lawsuit argues that the state's "enforcement of signature requirements and the filing deadline prescribed by statute is not, in light of the current pandemic, narrowly tailored to meet any compelling, or legitimate state interest."

The Michigan Secretary of State office has held firm to the May 27 deadline.

No easy way out of Michigan prisons

At stake is the Michigan Prisoner Rehabilitation Credit Act, which is seeking a spot on the November ballot. The act, if passed, would restore "good time" credits for good behavior to the state prison system, which were eliminated by a vote of the people in 1998.

Truth In Sentencing, the law in Michigan, means that people must serve their minimum sentences before being released.

This has left the state with few means to bring its prison population down as the coronavirus spreads. As of Monday, it had killed 59 inmates and infected 3,340, along with killing two Corrections staffers and infecting 354.

While jail populations across the state have dwindled, as sheriffs and stakeholders in the justice system work to determine who can be released without compromising public safety, the state prison population has not budged as easily.

Of Michigan's roughly 36,400 inmates, 28,000 haven't yet reached their minimum sentence and are ineligible for parole. Comparing the time span from January to late May, prison intake is down about 1,200 from 2019. Intake was frozen in March and April but some counties have recently resumed sending inmates over, said Holly Kramer, a spokeswoman for the department.

Though activists have privately and publicly urged Whitmer to remove prisoners from the path of a virus, the numbers show there can be no mass exodus from Michigan's prison system. Only Ohio's prison system has had more deaths than Michigan, while the federal system matches it with 59, according to the Marshall Project.

"Everything in Michigan is driven by our minimum sentences," said Jessica Zimbelman, an assistant defender at the State Appellate Defender Office. "And the way to get to a minimum sentence is a very complicated sentencing guidelines scheme" prone to mistakes, she added.

"That's the kicker in Michigan," Zimbelman said. "You have this complicated scheme in the first place. And then you have to serve every single day of that sentence before you're even eligible for parole. That has contributed to why we have such a high prison population in Michigan, and why people continue to stay incarcerated perhaps longer than they need to, with no real benefit to keeping the public safe."

This leaves about 5,000 people who can be considered for parole. But among that group, many are in prison now due to violations made the last time they were given parole, according to the Michigan Department of Corrections.

As of late April, there were fewer than 150 clemency applications. Most seek commutations, which reduce sentences but don't erase them from the record. But 31 seek pardons, which do erase the recorded conviction.

Even if Whitmer wanted to release everyone whose name appears on a clemency application, it would affect fewer than 0.5% of the prison population.

Even then, clemency is not a fast process. The law builds in multiple notification windows for victims, prosecutors and the public to weigh in, and requires a public hearing.

Since all MDOC public hearings were canceled starting in March and won't return until June, when they will be held on Microsoft Teams, there has been no opportunity for clemency since the virus reached Michigan.

Instead, traditional parole has been the state's method of hurrying the return of eligible inmates to the real world.

In April, 820 people were released on parole, compared to 700 in March, which was closer to the norm. Overall, the Parole Board releases about 9,000 people per year. If releases hold at current levels, that number will jump to 10,400 releases per year.

Activists supporting the return of "good time" credits to Michigan believe it would be a helpful avenue for bringing down the prison population in the event of public emergencies such as the coronavirus.

Beyond the prison walls, Whitmer has ordered, since late-March and extended through mid-June, statewide lockdowns to allow for social distancing meant to stem the spread of the virus.

Social distancing and the lockdown have not only made signature-gathering much tougher, but it's also more expensive, said Amani Sawari, statewide coordinator of the ballot initiative, as petitions are mailed out one-by-one and must be returned.

"The U.S. Postal Service is running several weeks behind on the processing of mail in Michigan," the restraining order request notes. Despite it all, the group says it has collected 202,000 signatures so far.

Realizing the difficulty of meeting the 347,000-signature requirement by the May 27 deadline, given the lack traditional public gatherings, the group filed a federal suit, via mail, on May 4.

The problem is the lockdown affected the federal courthouse, too. Particularly mail operations, as mail wasn't reviewed for weeks, and even when that changed, was only being checked twice per week.

The lawsuit wasn't logged into the federal computer system until May 20, just a week ahead of the deadline. The two sides held a status conference on Thursday, and the state's response is expected Wednesday.

The group will have a chance to respond by June 1, a staffer for Judge Matthew Leitman confirmed. The judge's office said no date had been set for further conferences.

Sawari said the group's cause is aided by U.S. Judge Terrence Berg's ruling, recently, that Eric Esshaki, a Republican congressional candidate from Birmingham, be granted extra time to grab signatures, and that only half of the required 1,000 signatures would be required.

But the ruling only applies to similarly situated candidates trying to get on the August ballot. Even candidates for the Michigan House don't get to play by those rules.

"We're going to have to spend money and go through the fuss of putting a lawsuit out to get the exact same protection that the candidate got," Sawari said. "It just shows how little the state cares about the voice of the people, by allowing coronavirus to completely eliminate the people's voice from elections. The average person is not going to file a lawsuit to make their voice heard."

A Michigan Department of Corrections webpage on Truth In Sentencing notes that "currently, there has been no discussion of changing" the law, adding "citizens with an interest in the law should discuss the subject with their legislator."

But criminal justice reform activists have long taken issue with the law. They argue the prison system gives no incentive to people to improve themselves while incarcerated, as no amount of programming, education or behavioral improvement can change their status until their earliest release date has been reached.

Bishop Herman Starks is the treasurer for the ballot initiative. In a past life, he was a prisoner in Michigan, long enough ago that he benefited from the good time credits that haven't existed for two decades. (The credits still apply to those who earned them prior to the Truth In Sentencing law taking effect.)

While activists noted the general difficulties a ballot initiative would face, given the virus, and the lockdown, and the outsize attention granted to both, there is a widespread belief among them that Truth In Sentencing is problematic and needs to change.

"It's a very huge undertaking," said Natalie Holbrook, program manager for the American Friends Service Committee, a Quaker organization. "I hope that the public education work that they're able to do around it is helpful as we go up against TIS in the future. Right now, only 15% of the population can even be released."

The problem with the law, Holbrook argues, is that it "doesn't create incentives, beyond someone's personal motivation" as "there's not anything you can do to get time knocked off."

Oakland County Sheriff Michael Bouchard pushed for Truth In Sentencing in the late 1990s as a state senator and still backs it more than two decades later.

In the days before Truth In Sentencing, Bouchard recalled, the sentence a crime victim heard given in the courtroom would have "no correlation" to how much time that person would actually serve.

"People would ask, 'How did this happen?' after learning their attacker got out several years early," Bouchard said. "And that's a very sound question. There was no truth in the sentences being handed down. Now people know that the first number they hear is at least how long the person will serve."

In Oakland County, the jail population has fallen from 2,200, when Bouchard first took office, to about 1,300 before the coronavirus reached Michigan. Now it's under 700, and Bouchard admits that's artificially low due mostly to the lockdown.

"Our system affords great protection to the accused, and rightly so," Bouchard said. "But it needs to provide support and protection to victims as well."

Marquette County Prosecutor Matt Wiese, the incoming president of the Prosecuting Attorneys Association of Michigan, said that prior to Truth In Sentencing "it was a real guessing game" how much time people would serve, regardless of what was said in court.

"I could never give (victims) a real answer," Wiese said. "It's really reassuring for them to know the exact date, the earliest someone can get out. So it gives them peace of mind."

Tracy Wimmer, a spokeswoman for the Michigan Secretary of State, said the office and the group earlier Wednesday were coordinating a drop-off time, but the state did not respond to a follow-up query by press time.