Midland — Property owners who suffered flood damage last month after the collapse of two dams near Midland sued state regulators and companies that own and operate the failed structures Tuesday.

A suit seeking class-action status on behalf of 19 known plaintiffs was filed in U.S. District Court in Detroit against the William D. Boyce Trust and numerous people and entities in the Boyce Hydro Power company, including Lee W. Mueller and Stephen B. Hultberg, both of Nevada, and Michael d’Avenas of California, as well as JP Morgan Chase & Co., a co-trustee on the various trusts that own four dams in mid-Michigan. 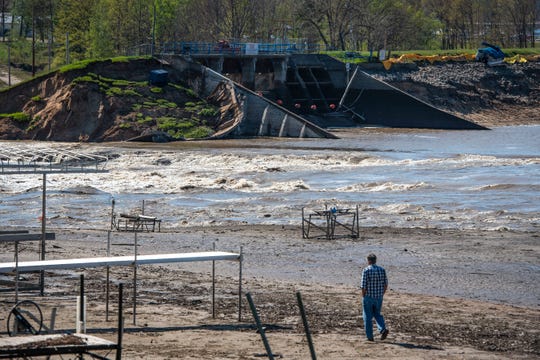 A man walks toward the Edenville Dam at Wixom Lake in Beaverton after the levees broke. (Photo: Nic Antaya, Special to The Detroit News)

All of the co-defendants are named as at-fault owners of the Edenville and Sanford dams, which failed May 19 during heavy rains, causing flooding that destroyed homes and businesses and forced the evacuation of more than 10,000 residents.

“There is no way to estimate the total damages at this time but it will likely be in the multiple of millions of dollars,” said attorney Michael Bonvolanta, who filed the lawsuits.

Dan Curth, an attorney for Boyce Hydro did not immediately respond Tuesday to messages seeking comment. Nick Assendelft a spokesman for EGLE, said Tuesday afternoon the agency had not seen the complaints but “our policy is not to comment on pending litigation.”

The Edenville dam, built in 1924, was part of a project to generate electricity that spanned both the Tittabawassee and Tobacco rivers, creating a 2,600-acre reservoir known as Wixom Lake, according to the complaint.

Wixom Lake completely drained out during the Edenville dam failure, which led to the Sanford dam's failure.

“We have 19 named plaintiffs in the federal complaint but expect to have many more and will be adding to the state complaint as well,” Bonvolanta said.

“What’s really sad is during the midst of the coronavirus pandemic we have these people who have been forced out of their homes with no idea when, if ever, they can return to them. I talked to a new client this morning whose house was entirely washed away. It’s gone.”

The federal complaint alleges the dam operators had been warned for more than a decade that the structures were insufficient to operate safely but did nothing to resolve the situation, other than to draw down water in violation of state regulations.

“The defendants knew or should have known that the dams could not sustain a major flood event yet repeatedly failed to remedy the issues,” Bonvolanta said. “And later a state inspector determined the dam to be in ‘fair structural condition.’”

The state was more concerned with the impact drawing down water would have on the fresh-water zebra mussel population, Bonvolanta said.

"There is indication they (state) pressured the dam operators to instead permit water levels to rise, ultimately breaching the dam," he said.