COVID-19 modeling site: Michigan one of three states 'on track to contain' virus

COVID-19 modeling site: Michigan one of three states 'on track to contain' virus

Lansing — A national nonprofit that's been monitoring the spread of COVID-19 says Michigan is one of three states "on track to contain" the novel coronavirus, but officials still warn the fight here is far from over.

COVID Act Now, a group of technologists, epidemiologists, health experts and public policy leaders, tweeted Tuesday that Michigan had moved to its lowest risk category on its warning dashboard for states.

"Cases are steadily decreasing and Michigan’s COVID preparedness meets or exceeds international standards across our key metrics," the site tweeted.

#Michigan has moved to green on our COVID Warning Dashboard, indicating that they are on track to contain COVID.

COVID Act Now says Michigan has a low infection rate, widespread testing in place and sufficient contact tracing. The state has experienced seven straight weeks of declines in new deaths linked to the virus, according to tracking from the state Department of Health and Human Services.

New York and Michigan, two states that were hit hard by COVID-19 in March and April but took drastic steps to try to stem its spread, were listed early Wednesday as the only two states with the "on track to contain COVID" designation, the lowest of four risk level categories, according to COVID Act Now. Later in the day, the organization gave New Jersey the designation.

"This is good news," Gov. Gretchen Whitmer said during a Wednesday news conference about the COVID Act Now tracking. But the governor added the state must remain vigilant and flexible to avoid a second wave.

The successes in Michigan are not necessarily permanent and the story is ongoing, said Dr. Joshua Sharfstein, vice dean for public health practice and community engagement at the Johns Hopkins Bloomberg School of Public Health.

The virus is taking different paths in different states, and Michigan has responded well, he added. And it's not just because of government officials' actions but also because of what residents have done, he said.

People could over-analyze the data and think it's all about particular policies, but it's also about messaging and individual decisions, Sharfstein said.

"The spread really depends on what people individually do," he said.

According to COVID Act Now, four states — Alabama, Arizona, Georgia and Missouri — have the highest risk level of "either actively experiencing an outbreak" or "at extreme risk." Sixteen states are at the second-highest risk level, described as "at risk of an outbreak." 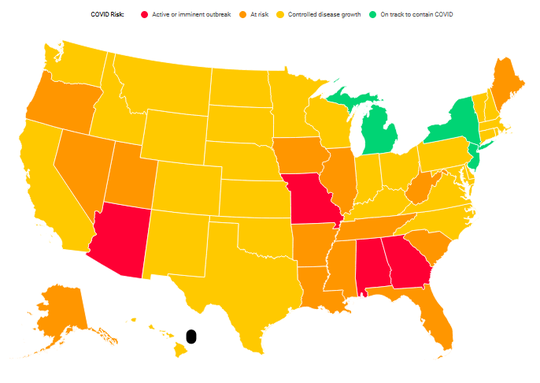 A map from the website COVID Act Now shows Michigan, New Jersey and New York are the three states currently "on track" to contain COVID-19 as of Wednesday, June 17, 2020. (Photo: Screenshot)

“We don’t know, for sure, what exactly is happening," he said about states where there have been recent surges.

"I think, in some of the cases, the messaging has been pretty mixed about whether this a big deal," he said, referring to the virus.

COVID Act Now has been publishing modeling on the potential for the virus' spread nationally since March 20, 10 days after Michigan confirmed its first cases. Whitmer has cited the site's modeling in past weeks as she has taken steps to combat the virus.

Both Michigan and New York had many cases of the virus early on but have been driven down its prevalence, said Jonathan Kreiss-Tomkins, one of the founders of COVID Act Now.

The two states were once among the top three nationally for confirmed cases and might have had an easier time decreasing their infection rates because of how high the rates once were, he acknowledged.

"The growth rate gives you a sense of your trend and momentum," Kreiss-Tomkins added. "You take action and you can see the effect of the actions."

As of Wednesday, Michigan reported 60,393 confirmed cases overall and 5,792 confirmed deaths linked to it. The caseload increases to 66,497 when including presumptive infections, and the death toll rises to 6,036 when including probable deaths — individuals who didn't test positive for the virus but whose death certificate listed COVID-19 as a cause of death.

Whitmer's efforts against the virus have drawn criticism from President Donald Trump and other Republicans who have argued she went too far, damaging the state's economy. But they have drawn praise from many epidemiologists who argue that she's done what's necessary to save lives.

Researchers at Imperial College London and Oxford University said last week that Whitmer's measures had potentially saved tens of thousands of lives in the state.

Michigan once had the third most COVID-19 cases and third most deaths linked to the virus nationally, according to tracking by Johns Hopkins University. Now, Michigan has the ninth most cases and sixth most deaths.

States that pursued weaker restrictions or kept restrictions in place for shorter periods, such as Texas and Florida, have moved ahead of Michigan in their total number of confirmed cases. 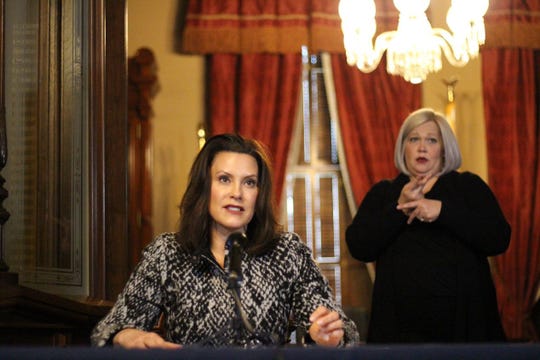 Whitmer allowed restaurants and bars in Northern Lower Michigan and the Upper Peninsula to begin reopening dine-in service on May 22. Restaurants in other parts of the state were allowed to reopen on June 8.

So far, Northern Lower Michigan and the Upper Peninsula haven't experienced spikes in new cases, but health officials in the regions are urging caution.

"This is certainly not over," said. Dr. Kevin Piggott, medical director for the Marquette County Health Department. "I know a lot of people act as though it’s over.”

The Institute for Health Metrics and Evaluation at the University of Washington released modeling last week that showed Michigan with the fourth most COVID-19 deaths nationally in a forecast that considers a potential second wave in September and goes through Oct 1.

The projected total for Michigan was 8,771 deaths by Oct. 1 — 2,979 more deaths than the state currently has reported.

"We’re now able to look ahead and see where states need to begin planning for a second wave of COVID-19," IHME Director Dr. Christopher Murray said. "We hope to see our model proven wrong by the swift actions governments and individuals take to reduce transmission."

Last week, Michigan reported 115 new confirmed COVID-19 deaths statewide. That's an 88% plunge from a peak of 966 confirmed deaths during the week of April 19-25.