The company had shut down the line, which features two pipelines that run parallel to one another in the Straits of Mackinac, after discovering the problem Thursday. But on Saturday, Enbridge spokesman Ryan Duffy said an inspection of the west leg had been completed and "the issue with the screw anchor assembly" was isolated to the east leg.

The company "resumed normal operations" on the west leg at about 2 p.m. Saturday. 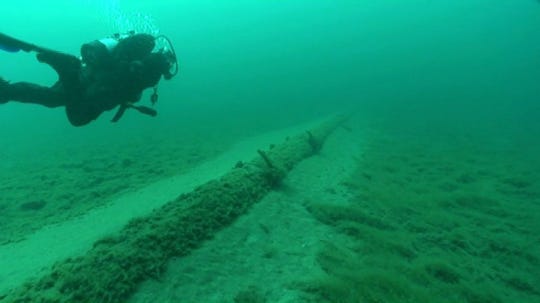 A diver inspects the Line 5 oil pipelines at the bottom of the Straits of Mackinac in 2013. (Photo: National Wildlife Federation)

But in a Monday statement, Nessel said Enbridge had provided no explanation of what caused the damage and a "woefully insufficient explanation of the current condition and safety of the pipeline as a result of this damage."

On Friday, Michigan Gov. Gretchen Whitmer announced that Enbridge had informed her administration that it shut down the line after a support received what the governor described as "significant damage" from an "unknown" cause.

The governor requested Enbridge turn over "all relevant information about this most recent damage." In a letter to the company's CEO, Al Monaco, she asked Enbridge to "provide affirmative evidence, including appropriate diagnostic testing, that establishes the integrity of the dual pipelines in the Straits of Mackinac."

On Saturday, Duffy said there were no issues or damage to the anchor structures on the west leg.

But in court filings, the attorney general's office said Enbridge "unilaterally reactivated" the west leg of the pipelines without consulting the state and "prior to providing any of the information that the governor requested."

Whitmer requested that Enbridge leave the dual pipelines shut down until "an investigation into the cause of this incident and the overall risk to the Great Lakes could be completed," Nessel's new court filings said.

"The people of the state have an interest in ensuring that privately owned infrastructure that threatens the Great Lakes is operated in a reasonably prudent and legal manner, complete with appropriate government oversight," the court filings added.

"By shirking its legal obligations to share information with the state, Enbridge has irreparably harmed the people by denying their ability to oversee Enbridge’s operations on public trust bottomlands and protect the Great Lakes."

As part of an ongoing legal fight with Enbridge over Line 5, Nessel is asking Ingham County Circuit Court Judge James Jamo to order Enbridge to provide all of the information in its possession related to the damage to Line 5, according to a press release.

She also wants the court to order that operations of the pipeline be suspended until the state has conducted a full review of the information.

"The only potential harm to Enbridge would be the financial impact of a temporary shutdown of the Line 5 pipelines," one of the attorney general's court filings said. "But that harm is dwarfed by the potential harm to the public if there is a release of oil from the pipelines.

"Therefore, a preliminary injunction requiring Enbridge to provide all information it possesses to the state for a full review and requiring that the pipelines be shut down until this review is complete is appropriate."

In response, Enbridge said "the temporary restraining order and preliminary injunction sought by the Attorney General of Michigan is legally unsupportable, unnecessary, and will be vigorously opposed" by the company.

“We have been working very closely with the Pipeline and Hazardous Materials Safety Administration (PHMSA) to ensure it is able to assess the safety of the dual pipelines," said Vern Yu, Enbridge’s executive vice president and president, liquids pipelines. "This included informing them of our completion of remote operated vehicle inspections of the west leg of the line, which confirmed there was no mechanical damage to the pipeline or any support-anchors.

"We have also provided engineering assessments and other materials to state officials. We continue to work with PHMSA to answer their questions about our assessments of the dual pipelines."

In a statement, Whitmer said she fully supports Nessel's actions.

When it's operating, Line 5 transports up to 540,000 barrels per day of light crude oil, light synthetic crude, and natural gas liquids, according to Enbridge.

The damage to the anchor support is the latest development in years-long debate about the 66-year-old Line 5 in the Straits of Mackinac as environmental groups have voiced concern about the potential for a rupture and called for the line to be shuttered.

But earlier this month, the Michigan Court of Appeals unanimously upheld the constitutionality of a 2018 law that allows Enbridge to build a tunnel to house the pipelines and protect them from potential damage.

Then-Gov. Rick Snyder Snyder, who signed the legislation into law, said two years ago the $350 million to $500 million tunnel would eventually eliminate "nearly every risk" of an oil leak into the Straits.