Cornelius Frederick, 16, died May 1 after suffering a heart attack on April 29. Authorities said he was restrained by staff after throwing a sandwich

Charges have been filed against three staff members of a youth services facility in Kalamazoo where a teen died after being restrained, the county prosecutor said Wednesday.

The case drew wide condemnation, cancellation of a state contract with the facility and the firing of staff allegedly involved. It prompted the family's attorney to point to the "eerily similar" circumstances of the George Floyd case, who died after a police officer knelt on his neck for more than eight minutes May 25 as he cried out that he couldn't breathe.

Kalamazoo Prosecutor Jeffrey Getting announced that charges have been authorized against Michael Mosley, Zachary Solis and Heather McLogan. The charges come almost eight weeks after the death May 1 of Cornelius Frederick, 16, at Lakeside Academy after he was restrained, authorities said, on April 29 by staff allegedly for throwing a sandwich.

"That it ever happened is a tragedy of beyond description," Getting said during a press conference Wednesday. "And we certainly don't want to allow for another young man to have his life taken from him in this way." 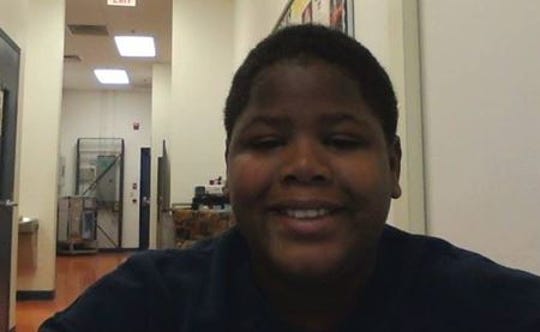 Getting said his office "felt it was necessary to prioritize this case in a way that is seldom done."

"I've had three assistant prosecuting attorneys reviewing thousands of pages of information, watching DVDs, reviewing all of the materials possible," Getting said.

After reviewing the evidence, he "moved as quickly as possible with charges" against those allegedly responsible, he said.

Frederick died May 1 after suffering a heart attack on April 29.

The state said last week that it had terminated its contracts with Lakeside Academy for youth in foster care or the juvenile justice system. All 125 youth at Lakeside were placed elsewhere, the state said.

The teen's family is suing the school and the company that owns it for $100 million, alleging negligence. The lawsuit alleges that staff sat on his chest for nearly 10 minutes as he screamed that he couldn't breathe.

“Cornelius’s scream of ‘I can’t breathe’ was not enough to get the staff members to stop the excessive restraint,” said one of the lawyers for the estate, Jon Marko, of Detroit, in the complaint.

The situation is “eerily similar,” the complaint and Marko said, to the death of Floyd while retrained by Minneapolis police earlier this year.

Floyd’s death is the focus of international demonstrations against police brutality and racial intolerance.

The suit names Lakeside Academy and Sequel Youth Services of Michigan, which has a management agreement with the company Lakeside for Children to operate the facility.

Geoffrey Fieger, who filed the lawsuit with Marko, said in a statement Wednesday that an attorney for Sequel "has refused to give the family the video of Cornelius’ killing."

“It is time for the perpetrators to come clean,” Fieger said.

Sequel said Monday it was saddened by Frederick's death and it had fired the staff involved: "Additionally, we have removed the former executive director of Lakeside from the organization. We have been in regular contact with law enforcement and state officials to help ensure justice is served and have accelerated the work that was already underway across our organization to move to a restraint-free model of care."

Marko said Frederick was a ward of the state.