There is also a chance for a few isolated tornadoes, the National Weather Service says

Much of southern Michigan is under a severe thunderstorm watch until 5 a.m. Saturday, the National Weather Service said, with possible storms, heavy rain and high winds.

The area covered by the watch stretches from Grand Rapids to Port Huron and down past the Ohio and Indiana borders.

That stretch of the region could see winds from 60 to 65 miles per hour, an inch of hail, and anywhere from 1.5 to 2 inches of rain.

Wayne County, along with parts of southern Oakland and Macomb counties, were under a severe thunderstorm warning until 1 a.m. The weather service has also issued a flood advisory through 3 a.m. for Wayne, Oakland, Macomb, Livingston and Washtenaw counties.

"Heavy rainfall in the 1 to 2 inch range is likely over about a 1 to 2 hour time period and is expected to produce urban and small stream flooding," the weather service said.

As downpours crossed Detroit at about 11:30 p.m., flooding was reported on Interstate 94 near the Lodge Freeway exit, according to the NWS website. 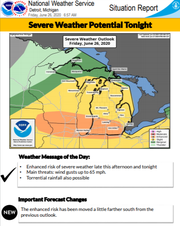 There's is an 'enhanced risk' of severe weather in parts of southern Michigan on Friday. (Photo: National Weather Service)

Sara Pampreen, a National Weather Service meteorologist, said there is a "potential for an isolated tornado," but that the more likely threat is wind damage.

Wind gusts near 18 mph were expected by 4 a.m., according to the forecast.

High winds tend to knock over tree branches, which take down power lines. Last year, back-to-back storms on this same week knocked out power for hundreds of thousands of homes and businesses in Michigan.

Detroit, Oakland and Macomb counties, and Flint to the north are all considered at "slight" risk of high winds. Cities such as Ann Arbor, Lansing, Battle Creek, Grand Rapids and Benton Harbor are in the "enhanced" risk area.

If the high winds come, it will be ahead of a warm weekend, with highs in the upper 80s expected throughout.