Michigan's 'creel clerks' want to hear more about your catch

Michigan's 'creel clerks' want to hear more about your catch

Robbie Zambelli greets anglers like a friendly stranger asking how the fishing is going.

He is sociable, but he has a duty.

Zambelli helps maintain some of the largest, most fertile freshwater fisheries in the world, Lake St. Clair and Lake Erie. 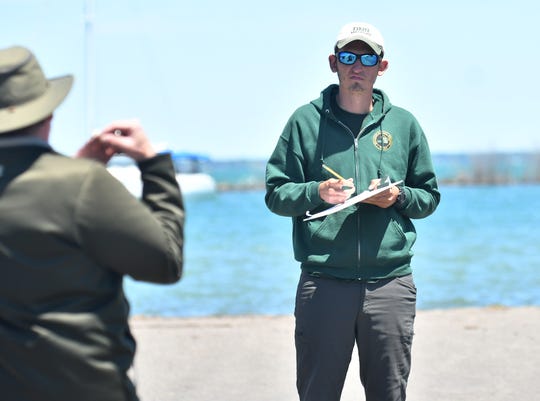 “Generally, when I approach people, I would say 90% of the time they are pretty welcoming of what I’m trying to do,” said Zambelli, one of about 20 creel clerks employed by the state Department of Natural Resources to survey some of the most important resources in the state.

And the state is mighty pleased most folk are OK because the work is integral to monitoring populations of fish and providing for sustainability.

Officials in the Division of Fish and Wildlife say the anglers’ reports and eyewitness accounts provide the data for scientific models, monitoring of stocking trends and onsite, almost daily insights, such as the presence of invasive species.

“A lot of times, I don’t even introduce the fact that I’m doing a survey,” said Zambelli, 23, of Macomb Township. “I just kind of start talking to them, as if I was a fellow fisherman to see if they caught anything type of deal, in a pretty friendly way. I’m just talking to them.

“Generally, people don’t give me any problems.

“Every once in a while, someone will think I am a conservation officer trying to write them a ticket, or something. But when I explain to them real quick that we're just doing surveys of fish counts, they’re like: Oh, OK.”

Zambelli, who studied environmental sciences and resource management at Oakland University, is friendly but thorough when he quizzes anglers.

“I have a whole list of questions, like I want to know what they caught, legal and nonlegal released fish, if they harvested anything,” he said. “We have different sections of the lake mapped out, and I take note of where they caught the fish in a general location. If they were casting or trolling, you know, the method that they used. How many lines they put out. How often they fish.”

The annual state survey began in 1985, and creel clerks became a significant part of the program several years later.

The clerks are named for creel, the wicker baskets wading anglers sometimes carry, draped at their side, to hold their catch.

“Creel clerks are out there five days a week, so they might be some of the only folks from the fisheries division that anglers ever encounter,” said Sara Thomas, manager of the Lake Erie Unit of the division.

“They are collecting really valuable data, so it might take you an extra five, 10 minutes of your time. But we really encourage people to do that because it’s not only benefiting the resource, it’s benefiting the anglers in the long run, as well.”

For Steve Jones, who has fished on Lake St. Clair for five decades, the creel clerks are a welcome sight.

“They don’t bother customers at all,” said Jones, who operates Capt. Steve Jones Fishing Charters, in Harrison Township. “No way. I mean, if you want to have a good fishery, you need as much information as we can give to them, absolutely. 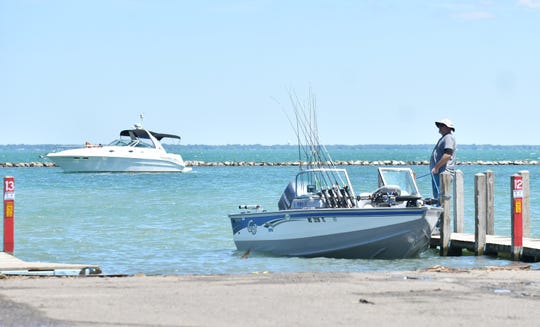 Jason Jacobson, 44, of Macomb waits with the boat for his brother, Kevin Jacobson, not shown, to bring the trailer around. (Photo: Robin Buckson, The Detroit News)

Without the work of the creel clerks, the state of Michigan, the federal government, researchers and others would have a sharp deficit of data, officials say.

“It’s really important to know how many people are fishing and how many fish they are catching,” said Dan O'Keefe, a senior extension educator with Michigan Sea Grant and Michigan State University Extension, in West Olive.

“Even though they are only able to interview a small percentage of the total number of anglers out there in any given year, the methods they use are really important because they can give us a sense of what the overall catch is, what the overall effort to claim the catch is. 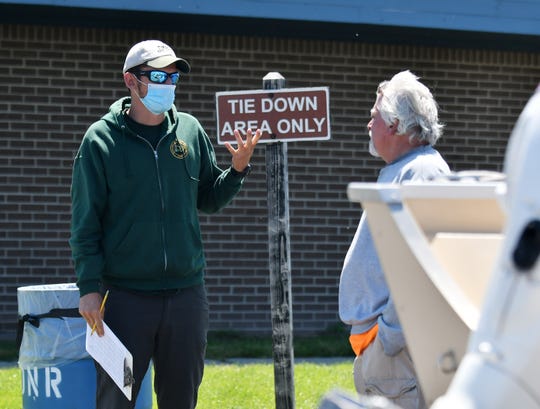 “Without that program, we’d really be flying blind.”

By collecting specific biological data, including lengths and weights, the state obtains a perspective on the general health of fisheries and species.

In terms of the overall condition of the lakes, rivers and streams, and issues like pollution, invasive species and sewage runoffs, the fish survey illustrates what the impact on the fish might be over time, officials said.

“I think they indicate overall we are serving current and future anglers very well with some fishing sites and species where there is room for improvement,” said Tracy Claramunt, a fisheries biologist for the state Department of Natural Resources in Alanson.

The creel clerks' work on the walleye fishery in Lake Erie has helped the state discern the future.

“Right now, the program tells us the fishery is booming, and anglers are enjoying successful fishing trips with incredible catch rates,” said Todd Wills, the state's research manager for lakes Huron and Erie. “Creel data from other time periods, most recently the mid-2000s, when the Lake Erie walleye population was strong, showed us that even one strong year class can be a major contributor to the fishery for more than a decade.

“Creel data help us put the fishery into context, too. And, from a Lake Erie walleye fishing perspective, we can say that it’s never been better during the time we’ve done the creel survey. 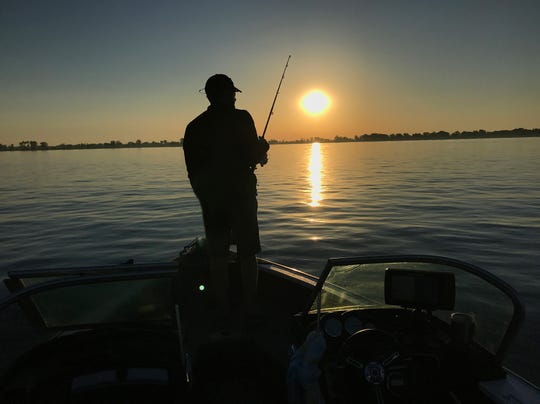 Sometimes the creel clerks take a sample of flesh from near the dorsal fin as evidence of a fish's age. When added to other scientific surveys, such samples contribute to monitoring the comparative health of specific species and the general population over a period of time.

“Ideally, you want to see more than a one-year class represented in what people are catching while they’re out fishing,” Thomas said. “That’s kind of an indication of a more healthy population.”

In recent years, the creel clerks helped document a record number of yellow perch in 2016 and a record low last year, with lots of 2-to-4-year-old perch taken.

When matched with record walleye catch and harvest rates occurring about the same time, and signs of healthy reproduction among the walleye, a theory is emerging that one species may be dominating the other — at least for the time being.

The state recently stocked the St. Clair and Detroit rivers with 60,000 brown trout, only to find the return from anglers was lukewarm, while fishers took lots of Atlantic salmon stocked in the same areas, Thomas said. That led the state to double down on the salmon and concentrate on stocking the brown trout in other areas where they seem to establish themselves more readily.

Much of the data are on the website of the Department of Natural Resources. (Click on “Fishing.”)

“It’s a pretty amazing program,” Wills said. “The data we get from it are really priceless.

“When we think of fisheries management, we think of managing fish habitat and people, and this not only gives us insight into the fish side of it, but it also allows us to think about how people interact with that fishery, how much time they spend.

“We can get estimates of the economic value of the fishery, knowing how much time is invested in it.”