Gov. Gretchen Whitmer expects to decide this week whether to move certain regions of the state back from their current phases as cases increase

Lansing — Gov. Gretchen Whitmer is considering downgrading certain regions of the state on her coronavirus phase scale, meaning more restrictions would be reimposed because of an increase in cases.

Whitmer said Tuesday that lower Michigan will not move forward from Phase 4 to Phase 5 before July 4, though she expressed hope earlier this month for as much. Northern Michigan and the Upper Peninsula are already in Phase 5, which has allowed the reopening of limited-capacity indoor movie theaters and gyms subject to safety procedures designed to minimize the spread of the virus.

"A lot of states in the country are watching cases grow exponentially and worrying that their ICUs are filling up," said Whitmer during a Tuesday press conference in Lansing, referring to intensive care units. "We are not in that position, but our numbers are not as strong today as they were a couple of weeks ago." 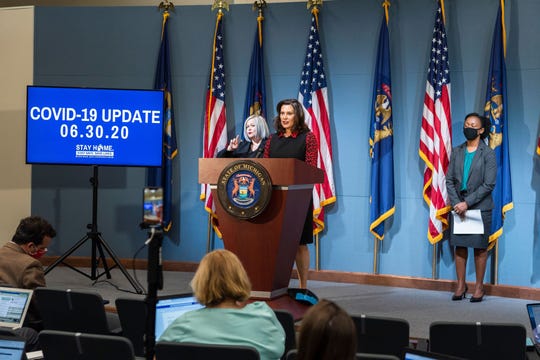 The Lansing and Grand Rapids regions, in particular, have experienced a spike in cases, increasing to a daily rate above 20 new positive cases per 1 million people, said Chief Medical Executive Dr. Joneigh Khaldun.

The Detroit, Kalamazoo, Saginaw and Jackson regions also are seeing spikes, but the rates are below 20 new positive cases per 1 million people.

Khaldun noted the average number of contacts per positive case is rising, from an average of three in May to four currently. This makes individuals' response to contact tracers all the more important, she said.

Whitmer said her office is looking at the data and modeling to determine which regions, if any, backtrack to more restrictions, but said for now, the lower half of the state will not be moving into Phase 5 before Saturday.

"I would anticipate being able to give you more clarity on what our next steps are in the next 24 to 48 hours," the governor said Tuesday afternoon.

Tuesday’s death tally of 32 included 27 older deaths identified by comparing death certificate data with the state's registry of laboratory-confirmed cases. These deaths might have occurred days or weeks ago.

While the daily number of confirmed cases has been rising, the state's number of COVID-19 deaths has continued to decline. Michigan's number of deaths in the past week is lower than those for the prior week.

But health experts worry that the spike in cases eventually will result in an uptick in coronavirus deaths.

The rising caseload in other states bumped Michigan out of the top 10 for cases across the United States, falling to No. 11, according to tracking by Johns Hopkins University. Michigan still ranks sixth for the most deaths.

Hospitalizations due to the disease in Michigan had not increased significantly through Friday, and the percentage of those testing positive for the virus continues to be about 2%.

Oceana County on the western shore of Michigan has struggled with COVID outbreaks at at least five farms and manufacturing facilities, with 278 cases confirmed through Tuesday.

Oceana, which has about 27,000 people, has now surpassed hard-hit Macomb and Oakland counties for per-capita cases overall, according to an analysis of state data.

To date, the state has tallied 70,728 known cases of COVID-19, including 6,858 probable cases, since the disease was first detected in Michigan in March.

Michigan's death toll from the disease now stands at 6,193, including 246 probable deaths.