In mid-June, Gov. Gretchen Whitmer asked President Donald Trump to declare a major disaster to open up financial support for the area.

Lansing – Jenna Hulse was at work out of town as a nurse when she got a message from her brother that a dam three blocks from her house in the Michigan village of Sanford was failing.

Six feet (2 meters) of water entered the home, and though Hulse said she’s lucky that the house she’s lived in most of her life is still structurally sound, many other peoples’ homes were destroyed, ripped from their foundations.

“Things aren’t ever going to be normal again. There will be a new normal, I guess, but there’s so much of the village that’s getting torn down. Eventually, the look and feel of it will be different,” Hulse said. “It’s just unfair and disgusting, watching these houses get torn down that I’ve been looking at my whole life.” 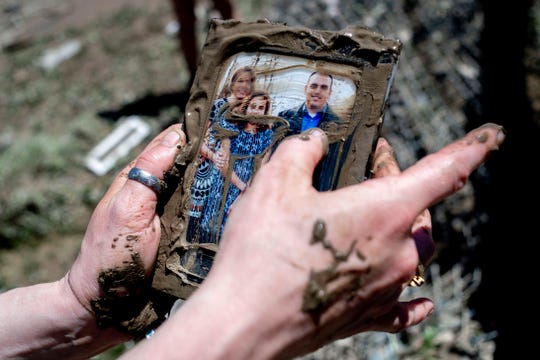 Sanford resident Kendra Tucker wipes away muck May 21 after finding a family photo for her aunt and uncle after their home was washed away in flood waters, in Sanford, (Photo: Jake May, AP)

Hulse is among the 859 Sanford residents whose lives were upended when privately owned dams with a history of neglect failed in May, resulting in more than $200 million damage in Midland County.

When the floodwaters roiled the Tittabawassee River, much of the attention focused on the larger downstream city of Midland, home to Dow Chemical Co. But many in Sanford are still scraping up muck and debris as they wait to find out whether any government aid may come their way.

In mid-June, Michigan Gov. Gretchen Whitmer asked President Donald Trump to declare a major disaster, which would open up federal resources and financial support for the area. Michigan has not yet received a response to Whitmer’s request.

Legislation to allocate $6 million in state funds to the Midland area, mostly for housing, is sitting in a committee, with the Legislature adjourned for the summer. 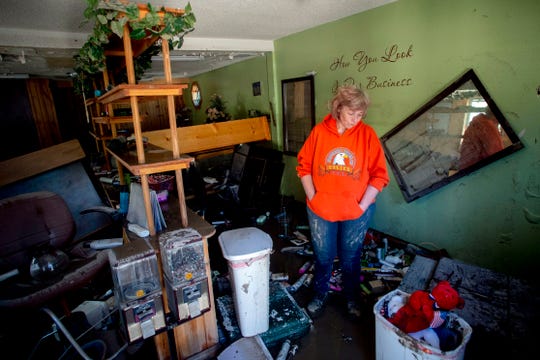 Sanford resident Connie Methner, owner of CJ's Hairstyling, bows her head May 21 as she copes with the damage after water flooded her salon to its ceiling in Sanford. (Photo: Jake May, AP)

Hulse said that when the floodwaters hit, countless volunteers in the village went to work helping her and families like hers by providing meals and supplies, and removing debris.

“The mud was unbelievable. It was slimy and it left this film on anything,” Hulse said. “A lot of the stuff that you thought, ‘Well maybe I’ll clean this off and keep it,’ you can’t even, you can’t.”

Sanford, being so small, has already spent more than its yearly budget on debris cleanup alone.

Emily Ricards created a Facebook page to organize volunteer work. Although state or federal government aid would be a huge help, Ricards said Sanford could not wait. Midland County has a history of salt and gravel mining, and local excavating companies are helping to clean up the debris.

“If we would have waited we’d still be sitting and in three foot of muck,” Ricards said.

Many damaged houses were not in the floodplain and did not have flood insurance, Ricards said. Together with the Midland Foundation, which funds programming and services for the county, the Sanford Strong Facebook page has raised $210,000 to take care of the immediate needs of residents, such as food and housing.

Floodwaters reached nearly to the ceilings of businesses in the downtown area, preventing them from reopening amid the coronavirus pandemic with the rest of the state, said Midland attorney Angela M. Cole, who lived in Sanford for more than 40 years. She created a GoFundMe that has raised nearly $20,000 to help local businesses.

“It’s very personal to me. I raised my three sons in Sanford,” Cole said. “When they went to college and came back, the first place they always wanted to go for dinner was Lanny’s Restaurant, which is right in downtown Sanford. We celebrated birthday parties, their graduations, anything you can think of there.”

The goal is to keep people in the village, Cole said. Supporting businesses will make it easier for residents to stay or visit, which would build the tax base.

“I think it’s better just to help than to sit back and wait” for state or federal funding, Cole said. “We’re gonna be very grateful for it, but can it really help the amount of devastation? Maybe not, so maybe if we do our part, that will help heal some more.”

Anna Liz Nichols is a corps member for the Associated Press/Report for America Statehouse News Initiative. Report for America is a nonprofit national service program that places journalists in local newsrooms to report on undercovered issues.