A dangerous and often fatal mosquito-borne illness is showing up earlier in the northeastern United States, and health experts say that could foreshadow a "busy year" in Michigan as well.

Eastern equine encephalitis has been a problem for decades, but this year, early detection in Massachusetts and New Jersey mosquitoes, combined with a lack of health department resources during the pandemic, doesn't bode well. 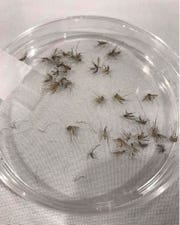 “It’s unnerving,” said Scott Crans, who heads up mosquito control efforts for the New Jersey Department of Environmental Protection. “It could signal a busy year.”

In 2019, there were 38 human cases and 15 deaths from EEE around the country. Ten of those cases and six deaths occurred in Michigan. The disease also infected 50 animals across the state, according to the Michigan Department of Health and Human Services website.

Kimberly Signs, an epidemiologist at the agency, said EEE rarely causes human illnesses in Michigan. "We can go several years without seeing any cases in people," she said. "We sometimes pick up cases in animals in some years and don't end up having any human cases."

Arboviruses — those transmitted by mosquitoes — have already taken a toll around the country.

So far in 2020, 14 people in the Florida Keys have come down with locally acquired dengue, which can cause fever, severe body aches and vomiting. Massachusetts has found its first mosquito carrying EEE, which kills approximately a third of people infected, according to the CDC. West Nile Virus has been found in mosquitoes, birds or other species in at least 18 states and has infected people in nine.

Michigan's first 2020 report of West Nile virus was in a hawk in Lapeer County last month.

The invasive Asian tiger mosquito, which can spread diseases such as dengue, chikungunya and Zika, was spotted back in June in Wayne County.

EEE presents a larger problem than other arboviruses because it spreads to a certain species that commonly bite humans. West Nile and Zika, on the other hand, mainly reside in mosquitoes that feed on animals, according to state health officials. 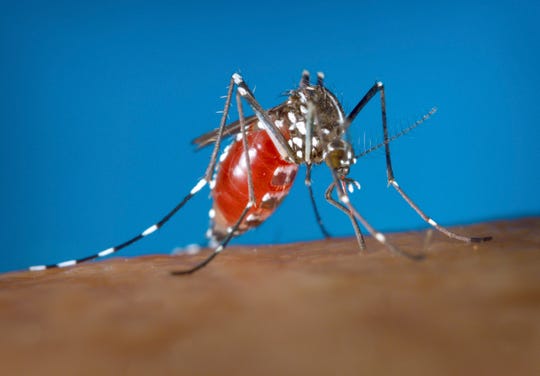 Symptoms can be very similar to the flu, Signs said, like fevers, body aches, and headaches that don't improve after a day or two. "You do need to talk to your physician if you've had a lot of outdoor exposure or been bitten by mosquitoes," she said. "We really encourage hospitals to send specimens to our lab for testing."

Emily Dinh, a medical entomologist at MDHHS, said outbreaks typically occur every 10 years in Michigan. "They're very localized, which is why it's hard to tell if EEE is getting worse or staying constant," she said. "It does seem like the time frame between outbreaks is shortening."

Health officials said they worry that residents spending more time outside as a result of COVID-19 could worsen case counts for arboviruses in general. Beyond that, the coronavirus has kept health department staffers busy and left no time to handle the typical mosquito prep.

“This year it’s more of a wild card, we’re not getting the surveillance we’d normally get,” said David Brown, the technical adviser for the American Mosquito Control Association.

In Washtenaw County, mosquito samples aren’t being collected because the health department didn’t have the staff or ability to hire and train the summer interns who would typically perform the work.

Dinh worked with a laboratory in Lansing that dealt with EEE. Since the pandemic began, the laboratory ceased all arbovirus activity and deals strictly with COVID-19, she said.

Michigan doesn't have any statewide mechanism for mosquito surveillance or control, Signs said, but there are a few counties around Saginaw Bay that have taxpayer-funded systems.

"They use various treatment methods based on what they're finding in their surveillance to reduce the mosquito population," she said. "In the parts of our state that are impacted by EEE historically, there is no such infrastructure.

"We tend to experience outbreaks as individual years, but it is an illness that we don't understand that well."

Monitoring and killing mosquitoes is a key public health task used to curb the spread of deadly disease. In recent years, top mosquito-borne illnesses have killed some 200 people annually in the U.S. But those low numbers are due in part to the efforts of public health departments to keep the spread at bay, unlike in other countries where hundreds of thousands are sickened and die each year.

How to prevent mosquito bites

To prevent infection, whenever a Michigan resident goes to swamps or bogs, especially in the southwestern part of the state, Dinh recommends mosquito repellent, long sleeves and avoiding those areas after sunset.