America's Thanksgiving Parade will take on a new name after The Parade Company announced a new presenting sponsor for the storied parade.

Michigan furniture company Gardner-White acquired the rights as a presenting sponsor, taking over for the now-closed Art Van's, The Parade Company said Thursday. The deal changes the name to America's Thanksgiving Parade presented by Gardner-White in the event's 94th year.

The Parade Company, which produces the parade, said its partnership with Gardner-White will be for three years. This will be the first year that the furniture retailer is a part of the parade. 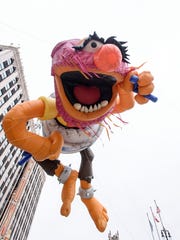 "(We) are incredibly grateful to have a partner whose commitment signifies an exciting future for America’s Thanksgiving Parade presented by Gardner-White," said Tony Michaels, president and CEO of The Parade Company, in a news release.

Art Van Furniture was the main sponsor the parade for seven years, beginning in 2013, and still had two years left on its sponsorship when the retailer filed for bankruptcy and closed its stores in March. In 2018, the popular event was named the best holiday parade in the country USA Today 10Best Readers' Choice Awards, an accomplishment Michaels attributed to the "heart and soul parade."

Gardner-White said it wanted more than to be in the parade.

"As Michigan’s top furniture store, it is our responsibility to do more than march in the parade, we need to take the baton and lead," said company president Rachel Stewart.

Even as Art Van liquidated and questions about sponsorship arose, Michaels stressed in March that The Parade Company was "on solid ground."

"It's a substantial partnership," Michaels said. "We'll be talking with people to replace that, if need be, and go from there. But I just come back to the jobs and the effect that this has on so many lives and so many people."

Headquartered in Auburn Hills, Gardner-White opened the doors in 1912 on Mack Street on Detroit's east side. The company was bought by Irwin Kahn in the late 1950s and the Kahn family still owns and operates the retailer with 11 stores in the state.