Attorney General Dana Nessel's office will not appeal to the Michigan Supreme Court after a lower court's opinion affirmed the constitutionality of an agreement between the state and Enbridge Energy to build the Line 5 tunnel.

A notice of appeal regarding the Court of Appeals' June 11 decision should have been filed within 42 days or Thursday, but no appeal was filed.

Nessel's office will instead focus its efforts on other litigation related to the controversial pipeline, attorney general spokesman Ryan Jarvi said Wednesday.

A three-judge appellate panel unanimously upheld the constitutionality of the law that was also found to be constitutional by a lower Court of Claims judge. Those rulings would allow Enbridge to construct a $500 million, four-mile utility tunnel beneath the Straits of Mackinac to house Line 5.

The June decision upheld the constitutionality of not just the tunnel agreement, but also a third agreement with the state that allows the company to continue operating the existing pipeline "while a tunnel to house a replacement section of Line 5 is permitted and constructed," Enbridge spokesman Ryan Duffy said.

"We look forward to working with the state to make a safe pipeline even safer," he said.

Line 5, which transports up to 540,000 barrels a day of light crude oil, light synthetic crude and natural gas liquids, has been the subject of a years-long dispute. Critics have feared a possible rupture of the 67-year-old pipeline in the Straits of Mackinac between lakes Michigan and Huron. 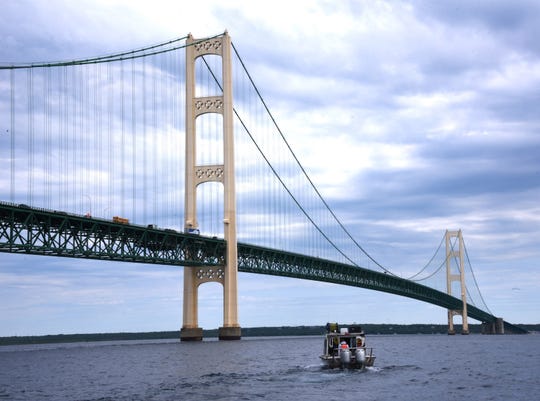 Attorney General Dana Nessel's office has missed the window in which to appeal to the Supreme Court a lower court opinion that affirmed the constitutionality of an agreement between the state and Enbridge Energy for the construction of the Line 5 tunnel. (Photo: John L. Russell/ Special to The Detroit News)

Upon taking office in January 2019, Gov. Gretchen Whitmer asked Nessel to review the law ushered in during a lame duck session in the last days of Republican former Gov. Rick Snyder's administration.

Nessel opined in March 2019 that the law violated the Michigan Constitution's title object clause because "its provisions go beyond the scope of what was disclosed in its title."

Enbridge asked the Court of Claims to determine the agreement's constitutionality last year when negotiations with Whitmer's administration on the tunnel construction timeline fell apart and Nessel threatened a lawsuit.

Court of Claims Judge Michael J. Kelly ruled in October 2019 that the agreement was constitutional because the tunnel was "germane, auxiliary or incidental" to the law's general purpose.

Separately, Nessel is seeking an order from Ingham County Circuit Court to shut down and decommission Line 5. The Democratic attorney general has argued the easement is a public nuisance, and violates the public trust and environmental laws, and has the potential to rupture from an anchor strike.

In that case, Judge James Jamo last month ordered the temporary closure of the east leg of the pipeline after a routine inspection uncovered scrapes along the east leg and a damage anchor support on the segment.

Enbridge maintains the damage done to the pipeline was not enough to threaten the safe operation of either leg, but the company must obtain confirmation of the pipeline's safety from federal regulators before Jamo will consider the east leg's reopening.

In a report for the state, Enbridge narrowed down to five the list of "small to moderately-sized" vessels that could have dragged a cable in a north and south direction over Line 5. The cable scraped the east leg and damaging an anchor support holding up the segment.

Four of the five boats are Enbridge-contracted vessels, according to the Canadian company's report.