President Trump prompts anti-Whitmer chants of 'lock her up' 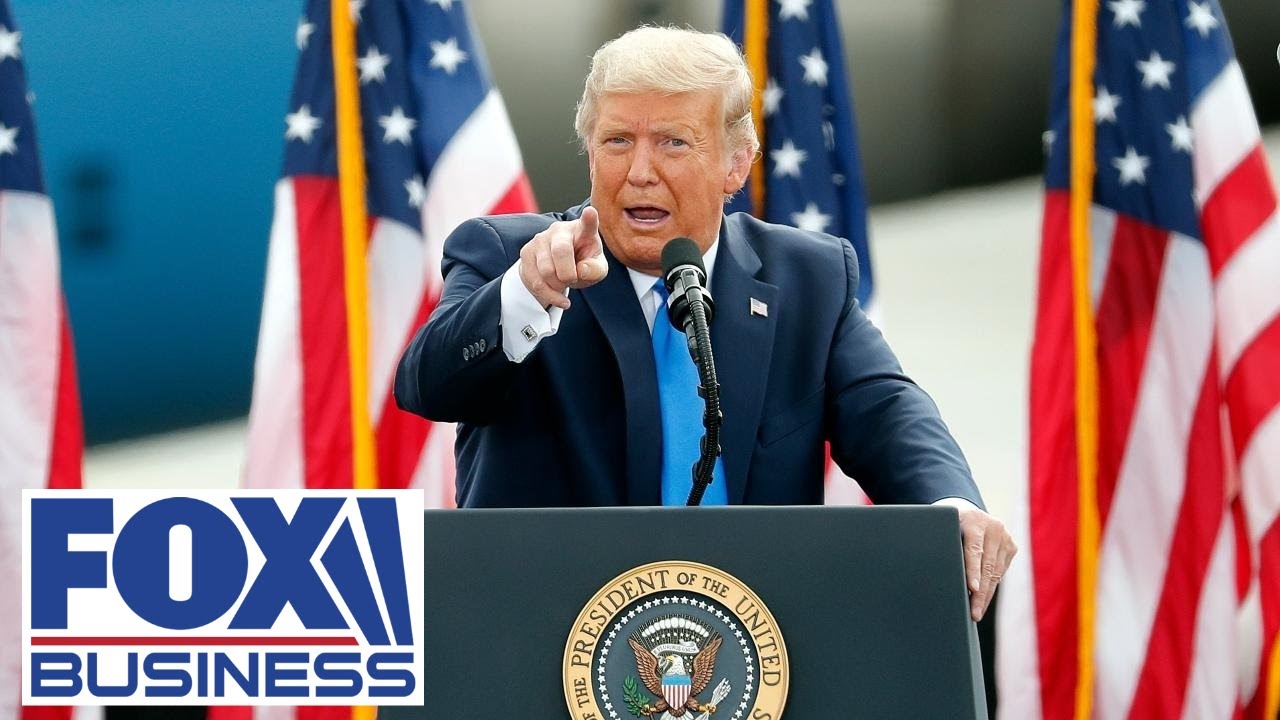 Muskegon — President Donald Trump tried to tie Democratic rival Joe Biden to the radical left of his party and told his supporters to "watch those ballots" during a Saturday rally attended by thousands of people outside an airport hangar in Muskegon.

The Republican president also insisted that Gov. Gretchen Whitmer needs to relax more COVID-19 restrictions, even though the Michigan Supreme Court already invalidated her emergency executive orders because the 1945 law she relied on was unconstitutional. She has since had her state Department of Health and Human Services issue new  epidemic orders to wear masks and limit the capacities of businesses.

“You’ve got to get your governor to open up her state." Trump said to cheering. "And get your schools open. … The schools have to be open.”

At another point, Trump raised concerns about the handling of the upcoming election by Whitmer and Attorney General Dana Nessel, another Democrat. He said Whitmer and Nessel are in charge of the ballots in the state.

But Secretary of State Jocelyn Benson, another Democrat, is Michigan's top election official. In May, the president threatened federal funding for Michigan and erroneously said Benson planned to send absentee ballots to all voters, when the Detroit Democrat instead sent voters applications for the ballots ahead of the elections.

"So how the hell do I put my political and our country’s political life in the hands of a pure partisan like that?" Trump said. "So you’ve got to watch it. Watch those ballots. Watch what’s going."

"Law enforcement is watching," he added.

The "lock her up" chant was reminiscent of Trump's campaign audiences from 2016, who chanted the phrase when Trump said Democrat Hillary Clinton should be locked up for sending emails over an insecure server in her home as secretary of state. Then FBI Director James Comey said Clinton shouldn’t be prosecuted.

The chants in Muskegon also came after federal and state authorities charged 14 men over an alleged plot to kidnap Whitmer, storm the Michigan Capitol and potentially start a civil war.

The Democratic governor responded on Twitter: "This is exactly the rhetoric that has put me, my family, and other government officials’ lives in danger while we try to save the lives of our fellow Americans. It needs to stop."

Whitmer also criticized Trump in the wake of the plot's revelation for not denouncing white supremacists and hatred.

The Republican president said at the rally that the Democratic governor should have thanked him since federal authorities foiled the plot against her, reiterating what he said on Twitter more than a week ago. "I do not tolerate any extreme violence," Trump tweeted. "Defending ALL Americans, even those who oppose and attack me, is what I will always do as your President!"

"The president continues to fan the flames of division and hatred," Peters tweeted. "I stand with Governor @GretchenWhitmer."

During the rally, Trump promoted Peters' Republican challenger John James and called the junior senator from Michigan the senator "nobody's heard of."

"We have a choice between two types of presidents in this election: @JoeBiden, a deeply caring human, who called @gretchenwhitmer to check in after the kidnapping plot. Or this guy — a superspreader of hate and divisiveness...," Gilchrist tweeted.

Michigan House Speaker Lee Chatfield, R-Levering, chastised the audience members for their chant in a tweet after the event while indicating he is excited to vote for Trump again..

"And no, Trump didn’t chant 'lock her up' about our Governor. But others did and it was wrong," Chatfield wrote. "She was literally just targeted. Let’s debate differences. Let’s win elections. But not that."

At the rally, Trump also insisted that Biden would be beholden to democratic socialists and radical leftists if elected.

“They crave power, and God help us if they get it," he said.

As an example, the president pointed to the firing of a Michigan teacher for tweeting about Trump. Whoever the person is, "we love you," Trump said.

Walled Lake teacher Justin Kucera was fired after tweeting about Trump and "liberals." Kucera, a 28-year-old social studies teacher at Walled Lake Western High School, wasn't fired for a tweet supporting the president but for a reply that later was deleted saying, "liberals suck man," according to a copy of the teacher's personnel file obtained by The Detroit News through a public records request.

Kucera was offered his job back a day after his story went viral, but declined the offer on the belief that "the issue would follow him into the classroom."

The official reason for the teacher's termination was a lack of professional judgment,according to a July 17 termination letter that followed two Zoom meetings in which he was asked about his July 6 tweets about the president and liberals.

The July 10 and July 15 Zoom meetings were not recorded, but accounts from two employees who attended the meetings indicate that Kucera said he was attempting to be sarcastic when he wrote "Liberals suck man." He took the post down when he realized "that sarcasm does not come across well on Twitter."

Trump also made numerous exaggerations during his 90-minute speech. He again said 2019 was Michigan's best year, a claim that some economists have rejected. At another point, he said Biden would "turn Michigan into a refugee camp."

The crowded event in Muskegon came 17 days before the Nov. 3 election and as the state experienced its largest number of cases in a week since the pandemic began at 10,241 cases. The previous weekly high was 9,768 during April 5-11.

“I think this is an indicator to the country that the state of Michigan is well in play,” Chatfield said Saturday afternoon. “The fact that Joe Biden and President Trump are both visiting Michigan is something that should concern Democrats across the country.

“All eyes are on Michigan again. We were here four years ago and it’s going to be the same result.”

Trump won the state by 10,704 votes in 2016, his smallest margin of victory nationally.

The campaign has also increased its television ad spending here this week, according to data from the nonprofit Michigan Campaign Finance Network.

But polling has shown the president behind Biden in key battleground states, including Michigan. Biden led Trump 48% to 39% in a Detroit News-WDIV poll of 600 likely Michigan voters, who were surveyed from Sept. 30 through Oct. 3. The poll had a margin of error of plus-minus 4 percentage points.

Trump last visited the state on Sept. 10, when he drew thousands of people to an airport hangar in Freeland, near Midland and Saginaw.

Biden has visited three times since the start of September,  stopping in Detroit and Warren on Sept. 9, Grand Rapids on Oct. 2 and Southfield and Detroit on Friday.

In Southfield, the former vice president slammed Trump for not doing enough to combat the COVID-19 pandemic and racism in the country.

Unlike Trump, who has been holding large outdoor rallies across the country, Biden has spoken at small events — usually not open to the public — with dozens of people wearing masks and socially distanced six feet apart from one another. The former Delaware senator held a Friday evening car rally at Detroit's State Fairgrounds.

The country hasn't "turned the corner" when it comes to the pandemic, Biden said Friday.

"It’s not disappearing. In fact, it’s on the rise again," he said.

Michigan has reported its two largest days ever for new COVID-19 cases this week with 2,030 new cases on Thursday and 2,015 new cases on Friday amid fears that a second wave of the virus could be hitting the state.

Glenn Kangas, 82, of Cadillac was one of thousands gathered in Muskegon for the president’s rally. Kangas wore an N95 mask and held a sign that said “Biden elected. USA gone.”

“I’m a little bit reluctant to come to these things. But I’m trying to be careful,” said Kangas, who added that he been at the venue since 10 a.m.

During a Saturday press conference, state Rep. Terry Sabo, D-Muskegon, called the Trump rally in his county "very concerning." He said it seemed like Trump was focused on "doing whatever it takes to get re-elected" instead of doing what's best for public safety.

"It's putting the health of the residents here in Muskegon County at risk," Sabo said. "We have people coming from all over the place to be a part of this rally, and history has shown that the president doesn't necessarily care about public safety when it comes to wearing a mask, doing the simple things that can prevent this virus, limiting the crowd sizes."

In 2012, President Barack Obama beat Republican Mitt Romney in the county by 13,552 votes. Four years later, Clinton beat Trump here by 1,177 votes — a four-year difference that was more than Trump's overall margin of victory in Michigan.

“He nearly won it,” Michigan Republican Party Chairwoman Laura Cox said about Trump’s performance in  Muskegon County in 2016. “He clearly has a strategy to win, and that’s why he’s here.”