Whitmer, Trump campaign clash after '8645' seen next to Michigan governor 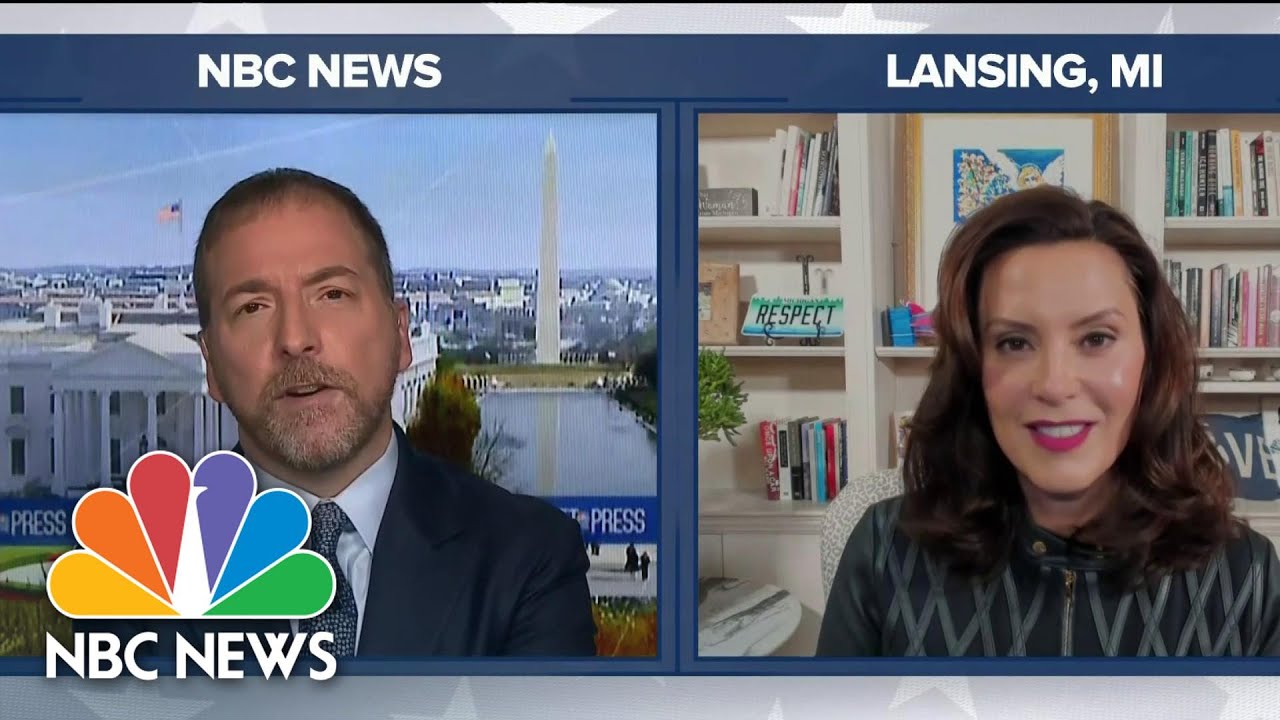 In a Sunday morning interview on "Meet the Press," Whitmer criticized Trump's Saturday rally in Muskegon, where the crowd chanted "lock her up" against Whitmer roughly 10 days after state and federal officials said they foiled a kidnapping plot against the governor.

Whitmer implored the Republican president and other officials on Sunday to "bring the heat down" and accused Trump of "inspiring and incentivizing and inciting this kind of domestic terrorism."

Whitmer, a national campaign co-chair for Democratic presidential candidate Joe Biden, made the comments with an "8645" emblem on a table beside her visible in the camera frame, an apparent anti-Trump message referring to "86ing," or getting rid of, the 45th president.

The presence of the decal prompted a backlash from Trump's campaign, which argued: "86 can be shorthand for killing someone."

"Whitmer is encouraging assassination attempts against President Trump just weeks after someone sent a Ricin-laced package to the White House," his campaign said on Twitter.

Websites such as Amazon and Etsy selling "8645" T-shirts, masks or decals describe the term as an anti-Trump message to "get rid of" or "impeach" the president. Some products lengthen the expression to "864511320" to encourage voting the president out Nov. 3.

"Governor @gretchenwhitmer has the gall to go on @MeetThePress this morning complaining about President @realDonaldTrump's rhetoric, but in the background displays a phrase which calls for the killing of President Trump!" Cox wrote. "This is truly disgusting."

Whitmer's campaign said the Trump campaign's reaction was evidence no one in the campaign had worked in the restaurant industry, referring to "86" as a way to denote a menu item being out or a customer being ejected from a restaurant.

"Gov. Whitmer’s rampant hypocrisy would be laughable if it were not so dangerous," said Chris Gustafson, a spokesman for the Trump campaign. "Her constant partisan rhetoric on cable news drives violence towards President Trump and the first family. It must stop."

Whitmer previously has accused Trump of encouraging fringe groups such as those who allegedly planned to kidnap her.

"Ten days after that was uncovered, the president's at it again and inspiring and incentivizing and inciting this kind of domestic terrorism," Whitmer told "Meet the Press" Sunday.

"People of goodwill on both sides of the aisle need to step up and call this out and bring the heat down. This is the United States of America. We do not tolerate actions like he is giving comfort to," she said.

Biden's campaign also condemned Trump's Saturday comments, arguing "the words of a president matter," especially in the wake of the alleged kidnapping plot against the governor.

"His conduct reflects his own insecurity and envy of Gov. Whitmer’s respected record of leadership in a time of crisis," said Andrew Bates, director of rapid response for Biden's campaign. "It also serves as a reminder that our nation is at a crossroads. Joe Biden stands with governors who are delivering results like Gretchen Whitmer."

At least eight of the 14 men arrested in the alleged kidnapping plot were associated or part of a militia group called Wolverine Watchmen and some had surveilled Whitmer's northern Michigan vacation property to prepare for the plot, state officials said.

Some of the group had also plotted to storm the statehouse and harm lawmakers there. At least two of them were at a June rally held in part to protest Whitmer's COVID-19 restrictions.

One of the men, Brandon Caserta, had posted a video online criticizing the president.

"Trump is not your friend, dude," Caserta said in the video. "It amazes me that people actually, like, believe that when he’s shown over and over and over again that he’s a tyrant. Every single person that works for government is your enemy, dude.”

During Saturday's rally, Trump encouraged Whitmer to loosen restrictions in Michigan, even though the Michigan Supreme Court struck down her orders earlier this month and the tougher restrictions of Michigan's stay-home order largely expired in late spring.

Whitmer blamed the president for any sort of restriction fatigue that may be occurring, arguing it was his fault COVID-19 took the toll it did in the United States.

"I do think that the person with the biggest megaphone bears a lot of responsibility here," Whitmer said.

She also noted that the recent uptick in cases in Michigan was in part expected with the change of weather, but complicated by the state Supreme Court decision to overrule her emergency powers.

"It’s all at risk and this partisan decision out of our Supreme Court makes it more precarious than ever," Whitmer said, while noting the epidemic orders from the Michigan Department of Health and Human Services kept many of her restrictions in place.

The high court issued two rulings. In one, the three Democratic-nominated justices and four Republican-nominated justice ruled unanimously that Whitmer had violated a 1976 by renewing COVID-19-related executive orders without the Legislature's approval after April 30.

In the other, the Supreme Court's four Republican-nominated justices ruled the 1945 emergency power law was unconstitutional because it delegated legislative authority to the executive branch. The three Democratic-nominated justices dissented.

U.S. Department of Health and Humans Services Secretary Alex Azar appeared on "Meet the Press'' just ahead of the governor.

When he was asked about Trump's criticisms of COVID-19 restrictions in Michigan, Azar noted the reality of "mitigation fatigue" among residents across the country was a real challenge.

"Why? Because we've been in this many months and people are tired," he said, reminding people to wear masks, wash their hands, keep distance and be mindful of indoor gatherings.