Whitmer urges $67.1B budget; lawmakers concerned about permanency of some programs 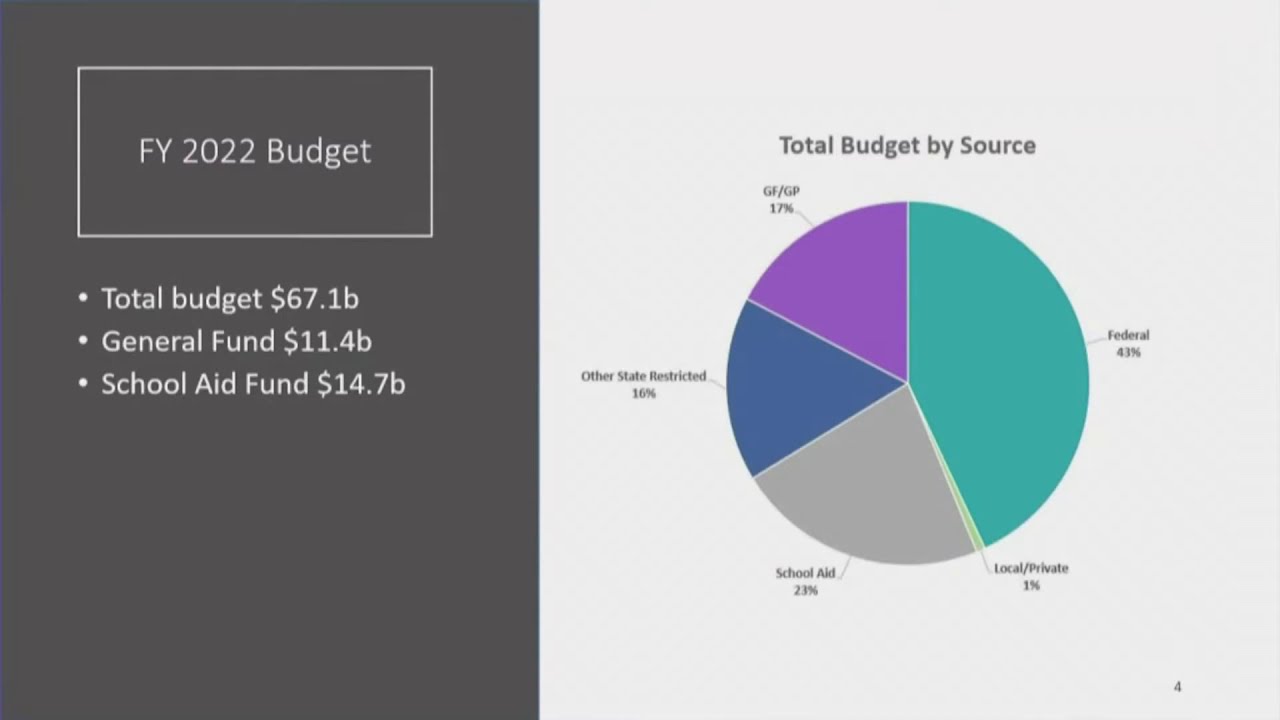 The budget includes $11.4 billion in general fund money and $14.7 billion for the School Aid Fund.

Last year's signed state budget weighed in at about $62.8 billion but billions of dollars more have since been added thanks to federal COVID-19 relief dollars that have been funneled into the state.

Republican lawmakers were quick to critique the spending since it included about $2.4 billion in one-time funding across fiscal years 2021 and 2022, much of which would be used for ongoing programs. One-time funding, such as federal grants or stimulus money, raises concerns about the longevity of financial support for a program.

♦ We’re offering a great deal on all-access subscriptions. Check it out here.

The one-time funding was used for items such as child care expansions and post-secondary tuition programs.

"It's not as much having the dollars for this time but where those dollars come from the next time," said Sen. Jim Stamas, the Midland Republican who chairs the Senate Appropriations Committee.

Whitmer defended the funding by noting it reflected the "realities of the moment we're in."

"We are mindful that there is some one-time funding in here, but this is also a unique moment where we've got to be really focused on re-engaging our economy," she said.

Rep. Thomas Albert, the Lowell Republican who chairs the House Appropriations Committee, also criticized the governor's proposed education funding, specifically the lack of any conditions that would require schools to hold in-person learning.

"There's not really any emphasis or any type of way to try to get kids back to in-person instruction, yet she's OK doing $370 million for child care," Albert said. "Why don't we just send the kids to school?"

Universities and community colleges would experience a 2% increase that reflects inflation, an addition that is worrisome to some since it is made up of one-time dollars. State Budget Director David Massaron said the one-time funding reflects what the state expects to be a tight budget in fiscal year 2023.

About $8.4 million was recommended to reduce socio-economic health disparities by improving health care access and $2.1 million for a new Department of Health and Human Services Race, Equity, Diversity and Inclusion Office. Another $91 million will be used to improve behavioral health services and $37.5 million for supplemental payments to nursing homes struggling after revenue lost during the pandemic.

The governor's budget would allocate $300 million in one-time payments to repair 120 local bridges, including nearly 60 that are closed or should be closed for replacement such as Miller-Rotunda Bridge in Dearborn and Smith's Bridge connecting Spring Lake and Ferrysburg.

The governor announced plans in 2020 to borrow up to $3.5 billion over the next four years.

In the fall, the state closed on an $800 million bond issue as one of the first installments of the $3.5 billion plan. The $3.5 billion in bonds is expected to cost about $5.2 billion if repaid through $206.6 million annual debt service payments over 25 years.

Another $290 million would go toward a clean water plan that would address sewer overflows and the elimination of failing septic systems. The governor's office proposed $20 million to address cybersecurity threats.

About $15 million was suggested for the Dam Safety Emergency Fund — which pays for emergency repairs when the dam owner fails to or refuses to pay for repairs; $40 million to help communities struggling with high water levels; and $20 million for contaminated site clean-up.

Whitmer's administration requested a quadrupling to $120 million for the Michigan Reconnect program, which provides free tuition for associate degrees for resident over the age of 25. She also recommended doubling to $60 million for the tuition program Futures for Frontliners.

She requested $25 million for the autonomous vehicle program Mobility Futures Initiative, $15 million for the employer-based training program Going Pro, $3 million for apprenticeship programs in construction and building trades and $1 million for Focus: HOPE for workforce and youth development.

Whitmer’s budget would deposit $175 million into the budget stabilization fund, replacing about half of what was withdrawn from the rainy day fund last year during the pandemic.

The state's budget outlook has improved thanks to the federal aid.

Budget experts in June projected a $3 billion budget hole for fiscal year 2021, which started in October. But those fears dissolved as tax revenue and federal aid began to stream into the state during the pandemic.

As books close on the 2020 fiscal year, the state expects to have a $3.7 billion balance left over, with a $2.5 billion surplus in the General Fund and $1.2 billion cushion in the School Aid Fund, according to a Senate Fiscal Agency report.

GOP lawmakers have acknowledged the improved outlook with caution, noting unsustainable federal stimulus money has made the state's budget outlook appear more "rosy" than the reality.