The 39 members of the Beyond Belief Chorus, with ages ranging from 55-100 years old, sing, dance, make friends and, most of all, they entertain. 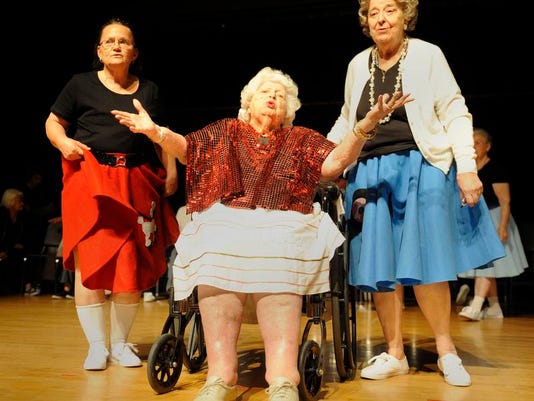 Performing in the seniors talent show “Beyond Belief” for Mission Six Foundation. From left to right: Suzanne Lennstrand, who said she is “59 plus,” of Commerce, Anne Ballingil 97, and Betty Leshok, 82, sing together. (Photo: Charles V. Tines , The Detroit News )Buy Photo

Novi – — “They tried to tell us we’re too old, too old to do this show,” sings 71-year-old Bill Bird, rewriting the words to the Nat King Cole song “Too Young.” “They say there’s not a chance, that we can sing and dance. To think we could is just beyond belief.”

Up until a while ago, it would have been beyond belief that Bird, a retired GM computer systems analyst from Commerce Township, would be up on stage singing a solo for a crowd, let alone a version of a song he wrote himself.

“The words just kind of popped,” he said. “I like going out and performing for people.”

Bird is one of 39 members of the Beyond Belief Chorus, with ages ranging from 55-100 years old. They sing, they dance, they make friends and, most of all, they entertain.

“Our motto is, if you can walk you can dance, and if you can talk you can sing,” said Marilee Dechart, 54, director of the chorus. “They all bring their special talent to share with each other and other people.”

The troupe is preparing to stage a new production, “Music! Music! Music!” at Novi Middle School Auditorium Monday and Tuesday at 1:30 p.m.

At a point where many seniors may not be active physically or socially, the Beyond Belief chorus members are on stage dancing musical numbers and singing along to songs from the 1950s. From the moment they hear the old tunes start playing on the piano, they transform into kids again, grooving to the songs they’ve known all their lives.

“We love it because we lived it,” said 82-year-old Marie Macura of Northville.

The 2014 United States Survey on aging found that for the first time in history, the population of adults above age 65 is set to surpass younger age groups. At the same time, communities are struggling to provide activities and services to support older adults and keep them active.

That’s where Mission Six, a nonprofit foundation, comes in. When the city of Novi decided to take its long-standing senior theater program and switch to a program more focused on youth groups, Aaron Martinez decided he wouldn’t let the members that loves the chorus lose their outlet.

“I fell in love with the group immediately,” said Martinez, a self-taught musician who founded Mission Six with the goal of maintaining the chorus group. “The energy they give off is contagious.”

It’s a bit unusual, because some of the people in the group are more than four times Martinez’s age. At 21, he’s set to attend Michigan State University to study constitutional democracy and political theory. But music, and a love for the songs of a bygone era, is a passion that spans the years.

“It’s a connection that I’m so glad I can share with them,” he said.

For one of the show’s numbers, the Mills Brothers’ “Glow Worm,” the cast dances in front of black lights with glowing sweat bands and hats. In another number, a trio of women sing while another trio tap-dance along.

Everyone is involved, even those who can’t move as easily anymore. One of the members uses a walker, and Dechart says they like to incorporate it into the act.

“It’s like, ‘do you mind if we put glowy stuff all over your walker,’ and she says go for it,” said Dechart. “One year, we turned it into a train for a prop in the show.”

In addition to theater shows like the one planned for Novi Middle School, the group travels to perform at area nursing homes and retirement facilities.

“That is such fun,” said 88-year-old Marion Cowan of Northville, who has been singing with the group for 14 years. “They appreciate us more than anybody.”

“We make them happy,” added Ve Stambersky, 80, of Livonia.

“Sometimes they sing along with us,” said Gerald Haran, 74, of Novi.

For many of the members, the best part of the group is the camaraderie.

“The people are very supportive,” said Haran. “When I first got in, they would say, ‘you sang that good,’ and you get that support — even if you know it was crummy.”

The friendships extend beyond the stage.

“We enjoy ourselves socially,” said Cowan. “We go out for a birthday party every month.”