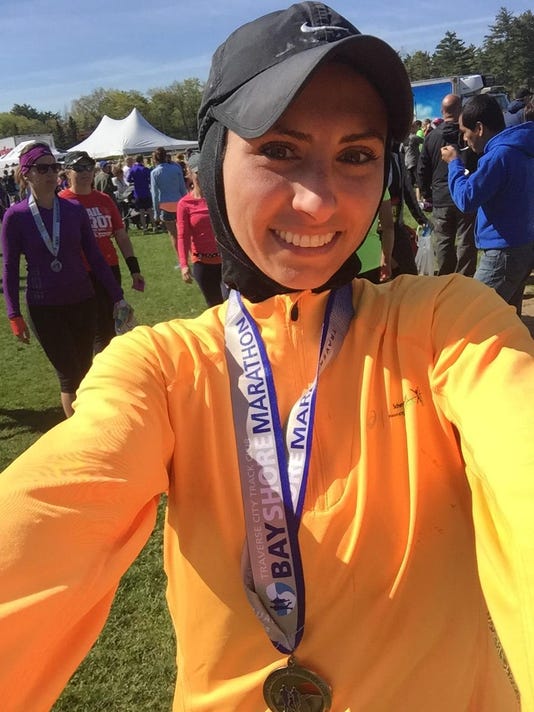 Rahaf Khatib is a dedicated athlete who relishes running as many miles as possible to prepare for races. A new challenge is just the latest lap.

The 32-year-old mother of three from Farmington Hills is racing to help change opinions of her and other fitness-loving Muslims. The Dearborn native aims to become the first "hijabi," or female who wears the traditional head covering, featured on the cover of Runner's World magazine.

The publication's online "Cover Search" contest allows supporters to vote through social media for "the two most awesome runners in America" to highlight on the front of its December edition, according to the website.

Once the entry period ends July 22, Runner's World will review the submissions and identify 100 semifinalists; community voting for those starts July 27, the website states. From that field, the judges select 10 finalists; two contestants — one male and one female — are chosen for the cover.

Khatib entered the competition last month and has so far garnered more than 6,100 votes — enough to rank eighth on its "leaderboard."

"Anybody that can spread the word, the better," she said. "I'm trying to promote it anywhere I can."

Already a workout fan, the Wayne State University graduate decided to train for a Dearborn marathon in 2012 at the behest of her son's instructor. Though initially planning to run the 5K, Khatib ended up registering for the 10K. "I knew the moment I crossed the finish line, I was hooked and would be coming back for more," she said.

Since then, Khatib has participated in a slew of events — including triathlons and, in April, the Schneider Electric Marathon de Paris in France — while aiming to run at least 20 miles a week. "Running helped me find confidence," she said. "It helps you feel like you belong to something. It's just a satisfaction that you feel by proving to yourself that you can do this, you can get out and cross that finish line and do it."

Along the way, she persuaded her physician husband, Mouhammed Joumaa, to join her. "To see someone working hard for something … you get motivated," he said.

Khatib — who plans to join the Bank of America Chicago Marathon in the fall and was "Hijabi of the Month" for June at the Haute Hijab website — has also inspired her children as well as friends to run.

"She's always been really health-conscious," said Hebah Hefzy, a physician from Franklin who has run in several races with her. "She's sort of a gym rat. We joke if she's around, we won't eat dessert. … She's motivated a lot of people to get fit. A lot of friends go to her for advice on fitness, running, even health-conscious things."

Last year, Khatib helped organize a 5K walk/run along the Detroit riverfront as part of the Islamic Society of North America's 51st annual convention. Among the hundreds who participated were "hijabis," she said. "It was a beautiful sight to see."

Still, Khatib, who while jogging conceals her skin and hair per Islamic custom, admits she rarely encounters many other hijab-wearing women in marathons. "I might see one or two. Sometimes I won't see any."

The light participation, as well as lingering negative views of Muslims, adds weight to winning the contest. "It dispels any stereotypes about us," Khatib said. "I feel like having people seeing me out there can soften up the tone a little bit."