Once-popular local oncologist Dr. Farid Fata was sentenced Friday to 45 years in prison for a complex Medicare fraud scheme in which he gave cancer patients overly aggressive doses of chemotherapy while treating others with the powerful drug for cancers they did not have.

Geraldine Parkin, left, 54, of Davison, whose husband, Tim, is still alive after being overtreated by Farid Fata, hugs Cheryl Blades, center, whose mother, Nancy LaFrance, died of lung cancer. Blades daughter and LaFrance's granddaughter, Jessica Blades, right, 25, both of Waterford, also cries. Family members of victims express emotion as they leave the federal courthouse in Detroit, Friday afternoon, July 10, 2015, after they listen to the 45-year sentencing of Dr. Farid Fata for misdiagnosis of cancer and Medicare fraud. Todd McInturf, The Detroit News
Fullscreen

Pat Steinhelper, right, 77, of Waterford, holds a picture of her husband, Jerry Steinhelper, who died due to complications of chemotherapy at the hands of Dr. Fata. She poses for a group shot with other victims and victims' family members after the sentencing. Todd McInturf, The Detroit News
Fullscreen

Karlene Foisy, 24, of Rochester Hills, cries as she talks to the media. She contracted a staph infection at the hands of Fata and has since had back surgeries. Todd McInturf, The Detroit News
Fullscreen

Dr. Farid Fata will be behind bars until he’s 95, but his tearful, grief-stricken victims and their family members — many wearing yellow to symbolize their hopes for healing and closure — insisted that’s not long enough. MHO - file photo
Fullscreen 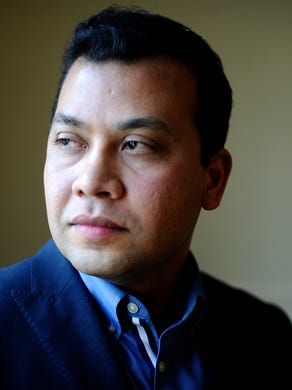 Dr. Soe Maunglay who worked for Dr. Fata blew the whistle on his employer, setting in motion the downfall of his fraudulent medical practice. Elizabeth Conley, Elizabeth Conley
Fullscreen

Monica Flagg, 54, of Rochester, seen in this file photo, was treated by Dr. Fata for cancer she did not have. Dr. Soe Maunglay discovered this and investigated, which led to charges against Dr. Farid Fata which eventually put him behind bars. Todd McInturf, The Detroit News
Fullscreen

U.S. Attorney Barbara L. McQuade of the Eastern District of Michigan speaks out against the heinous crimes and damage done to patients by cancer doctor Farid Fata during a press conference after the sentencing. John T. Greilick, Detroit News
Fullscreen 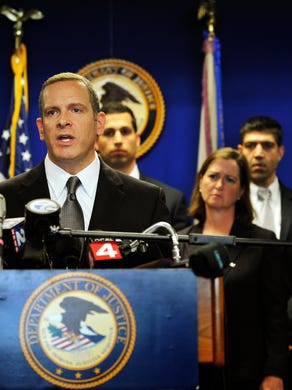 Melinda Tolar of Oxford is extremely angry, saying that Dr. Fata should have been sentenced to more than 45 years in prison as she holds a picture of her father, Stanton Richard Lamb, who died while being treated by Fata even though he did not have cancer. Todd McInturf, The Detroit News
Fullscreen

Jeff Berz of Utica puts his head down as he gathers his emotions while talking to the media after the sentencing. His father, Milton Berz, died of acute leukemia at the hands of Fata. Todd McInturf, The Detroit News
Fullscreen

Sydney Zaremba, 60, of Lake Orion, wears a button of her mother, Helene Zaremba, who died 3 months after beginning treatment for lymphoma by Dr. Fata. Todd McInturf, The Detroit News
Fullscreen

Donna Adams, left, 54, of Romeo, whose father-in-law, Rudy Adams, was a patient of Fata's and is still alive, hugs Geraldine Parkin, right, 54, of Davison, whose husband, Tim, was overtreated by Fata and is still alive. Todd McInturf, The Detroit News
Fullscreen

Cheryl Blades, left, of Waterford, hugs a woman who wishes not to be identified after the sentencing. The woman was treated by Fata while she was pregnant twice and is still treated for an unknown condition. Thus far, her children are healthy. Blades mother, Nancy LaFrance, died of lung cancer. Victims and the family members of victims are emotional as they leave the federal courthouse in Detroit, Friday afternoon, July 10, 2015, after they listen to the 45-year sentencing of Dr. Farid Fata for misdiagnosis of cancer and Medicare fraud. Todd McInturf, The Detroit News
Fullscreen

Donna Adams, right, 54, of Romeo, whose father-in-law, Rudy Adams, was a patient of Fata's and is still alive, hugs Karen Compton, left, 55, of Otter Lake, whose mother died of cancer. Todd McInturf, The Detroit News
Fullscreen

Victims and the family members of victims gather and walk into the federal courthouse in Detroit, Friday morning. Todd McInturf, The Detroit News
Fullscreen

Victims and the family members of victims gather and walk into the federal courthouse in Detroit, Friday morning. Todd McInturf, The Detroit News
Fullscreen

Detroit — The notorious oncologist who gave chemotherapy to cancer-free patients, and overmedicated others, as part of an expansive insurance fraud scheme cried and apologized Friday before being sentenced to 45 years in prison.

Dr. Farid Fata will be behind bars until he's 95, but tearful, grief-stricken victims and their family members who attended the sentencing — many wearing yellow to symbolize their hopes for healing and closure — insisted that's not long enough. They and prosecutors hoped Fata would get up to 175 years.

"They should have put him away for life," said Sue Lane, whose husband, Ronnie, died in 2010 of lung cancer after Fata treated him.

Friday's sentencing is not the last of the Fata episode.

A restitution hearing will come soon. The patients will get money from a fund expected to be set up from the $20 million forfeited to the government by Fata. The cash portion of the forfeiture is $17.6 million. Authorities continue to look for more assets that they can get from Fata, said U.S. Attorney Barbara McQuade.

And separate civil suits are pending.

Fata's conspiracy ensnared several hundred patients across Metro Detroit. He was accused of giving cancer patients overly aggressive doses of chemotherapy while treating others with the powerful drug for cancers they did not have.

The once sought-after oncologist was silent during sentencing hearings this week, refusing to glance at his victims as they recounted how he deceived them and left them with chronic pain and suffering. Friday, his stoicism crumbled as he pleaded, with tears in his eyes, for leniency.

"I stand before you ashamed of my actions ... it all went wrong," Fata said. "I cannot bring back the past. My quest for power is self-destructive.

"I pray for redemption ... I ask the court for mercy," Fata said. "They (patients) came to me seeking compassion and care ... I failed them."

His victims were unmoved. After hearing their tormentor's fate, they spoke in anguished tones about their disappointment in the sentence.

Robert Sobieray, a retired auto plant supervisor in his early 60s, was treated by Fata for a cancer he never had and lost most of his teeth due to side effects from the cancer drug Zometa. He was stunned when he heard Borman pronounce the 45-year term.

"My heart just dropped," Sobieray said outside the courthouse. "I've got to live with this the rest of my life. He'll probably live longer than me."

"We came here hoping for a maximum sentence today and what we saw was substantially less," said Jeff Berz, whose father was treated by Fata for acute leukemia. "We came here for closure today and I don't feel we got that closure."

Berz said he worries the sentence will create an "open season" for other doctors to commit similar fraud.

"Do I think that justice has been served today? No, I don't," Berz said. "I'm glad he's incarcerated ... but I don't feel good about the verdict. I was hoping he'd receive the maximum.

"I can go home, I can hug my kids, my granddaughter ... Dr. Fata's not going to do that. It does make it somewhat better to know he's going to be in a cell while I'm out enjoying my life."

"This is a huge, horrific series of criminal acts committed by the defendant," Borman said.

Fata's sentencing caps a two-year investigation into his medical treatment plans and practice in which he billed Medicare and Blue Cross Blue Shield for millions of dollars by having some of his patients get expensive cancer drugs and other treatments he could bill to the health insurers. His scheme, say prosecutors, also involved getting kickbacks for referring patients to a selected hospice program.

Federal prosecutors and attorneys for Fata agreed that 553 patients may have been the victims of medical mistreatment. McQuade, the U.S. attorney, said Fata "sized up" patients as potential moneymakers for himself.

"When they came though the door, he sized them up for 'How can I make the most money off this patient?'," McQuade said at a news conference after the sentencing. "Dr. Fata pounced on every opportunity to use a patient's body as a profit center. Dr. Fata did not care for patients: He exploited them as commodities. He over-treated, under-treated and outright lied to patients about whether they had cancer so that he could maximize his own profits."

McQuade, who lost her own father to cancer, called Fata's actions "egregious," adding that "nothing short of a life sentence is appropriate in this case."

Fata pleaded guilty in September to 16 counts of health care fraud, money laundering and conspiracy to give or receive kickbacks.

McQuade credited other medical professionals for reporting his wrongdoing to authorities. "This case would not have happened without whistle-blowers," she said.

One of them, George Karadsheh, was the practice manager at Fata's business, Michigan Hematology and Oncology Inc. In 2013, MHO was the state's largest private cancer practice, with clinics in seven cities, its own pharmacy and diagnostic center and 1,700 patients.

The downfall of Fata's cancer treatment empire was triggered in July 2013, when another cancer specialist, Dr. Soe Maunglay, saw some of the oncologist's patients and became suspicious. He dug into patient records and eventually shared his findings with Karadsheh, who alerted the FBI on Aug. 2, 2013, and filed a whistle-blower lawsuit three days later.

"My reaction is mostly sadness because I realized that despite the sentence, the patients would have to endure pain and suffering long after this decision," Karadsheh said.

Attorney Brian McKeen, managing partner of McKeen & Associates in Detroit, who is representing several of Fata's former patients in a pending civil case, said he found it "particularly disturbing" that Fata told the judge that he accepted responsibility "when in fact he has denied responsibility in each and every lawsuit filed against him."

About 40 lawsuits against Fata are pending in Oakland County Circuit Court.

"I will relish the opportunity to depose Dr. Fata on behalf of my clients," McKeen said. "We will not be satisfied until he and the others responsible for this mass tragedy have been made to accept full responsibility in the civil justice system."