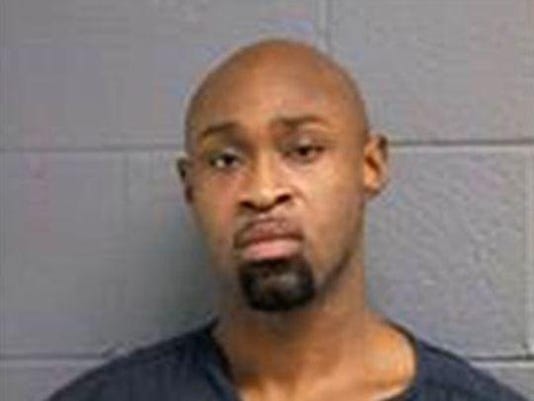 A fugitive parolee suspected of suffocating his girlfriend to death and stuffing her body in a closet in her Pontiac home has a history of absconding parole, according to state prison officials.

Kevin Jermaine Wiley, 34, has been on the run for nearly a week after what police say is the killing of Marie Elizabeth Colburn, 30, whose body was found on April 22 by her mother. Colburn had been an independent contractor for Michigan.com, delivering The Detroit News and Detroit Free Press.

On Tuesday, state and local officials were incensed that a serial offender keeps being granted parole.

“How many more people do we need to let out to see an increase in crime?” Attorney General Bill Schuette said in a statement to The Detroit News.

In March 2015, Wiley, 34, was paroled after being sent back to prison in November 2014 on a parole violation for tampering with his GPS tether. He was ordered to wear a tether for a year. But in the 13 months since, Wiley was on the run for six months.

Wiley fled on June 30, but was caught on July 9. The tether was reattached.

A month later, he was on the run again. He remained free until being caught in March. Time spent outside the tether doesn’t count against the year, and would need to be made up.

But on April 22, a month after being caught, Wiley escaped the tether again and left it in Detroit. Corrections officially considered him an absconder and a warrant was issued for his return.

Colburn’s mother told the News on Sunday she saw a notice from Corrections left on the door of her daughter’s apartment hours before she discovered the body in the closet.

Corrections and the Oakland County Sheriff’s fugitive apprehension teams continue to search for Wiley. Other law enforcement agencies have been notified to be on the lookout.

“This was a guy who committed a homicide a decade ago, has committed crimes since then, and he keeps getting paroled?” said Oakland County Sheriff Michael Bouchard.

Bouchard said the decision to parole or not should come down to one factor: what’s the likelihood of the prisoner committing another offense?

The sheriff believes slipping a GPS tether should be an “automatic flop,” or parole violation.

Wearing the GPS is a “condition of release,” Bouchard said. “Going dark on your parole isn’t a technical violation, in my mind, it’s predictive.”

Schuette opposes the movement in Michigan to pursue presumptive parole, calling it a “dangerous scheme.” He and Bouchard are concerned that parole is too lenient under current policy.

Wiley’s time in the Michigan prison system began in June 2005, when he was sentenced to four to 15 years for manslaughter. He was released in February 2009 — four years minus a few months for time served at the Wayne County Jail.

He graded out as an “average probability” of being paroled, said Corrections Department spokeswoman Holly Kramer.

Kramer said the decision to release him was based on his criminal history, the nature of his crimes, his conduct in the prison system, employment history, employment readiness, the results of an interview, and a “well-written” letter Wiley wrote to make his case.

In May 2012, Wiley violated his parole and returned to prison on a home invasion charge. He was released in August 2013 after serving one year and three months.

He violated parole by tampering with his tether in November 2014, and was back in prison until March 2015, when he was released and ordered to remain on the tether for a year