Barry Ellentuck, 53, of West Bloomfield Township is charged with attempted fraud between $1,000 and $20,000 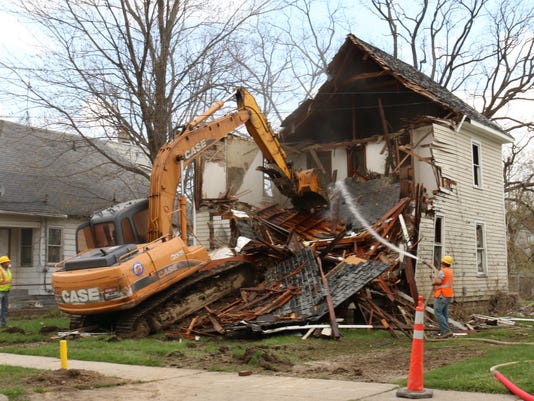 Pontiac — A West Bloomfield Township contractor went on trial Monday in Oakland Circuit Court on a charge he attempted to have a subcontractor inflate inspection billings on Detroit properties slated for demolition.

Barry Ellentuck, 53, of West Bloomfield Township is charged with attempted fraud between $1,000 and $20,000, a felony that can carry up to two and half years in prison.

The charges are based on accusations made by one of Ellentuck’s former subcontractors, Timothy McCarthy, that he was forced to overbill Detroit’s Land Bank Authority for 115 hours of inspection work between April 2014 and July 2014 that never occurred and his signature was allegedly forged on orders by Ellentuck.

“It is a relatively straightforward and simple case,” Paul J. Cusick, an assistant state attorney general, told a jury in Judge Wendy Potts’s courtroom in his opening statement Monday.

But defense attorney Joseph A. Lavigne countered, telling jurors: “not only were signatures not forged, but he (McCarthy) knew exactly what numbers were on the time schedules and asked the project manager (Ellentuck) to do this.

“There is no mystery. No shenanigans. ... What’s the crime? There is none.”

That is still to be determined by the jury of seven women and six men. And the case is being watched with interest as broader federal probes continue looking into Detroit’s effort, supported by federal funds, to remove blighted homes.

Ellentuck, a former city building authority director under former Detroit Mayor Dave Bing, has denied the allegations of the $6,300 in overbilling in more than $1.2 million he claims is still owed to his company, ADR Consulting, for overseeing demolition contracts in Detroit for the Michigan Land Bank.

ADR was under contract with the Michigan Land Bank to provide consulting services to the Detroit Land Bank for inspecting asbestos removal and other blighted housing demolition work through an intergovernmental agreement.

Ellentuck’s consulting company was paid $300,000 a year for technical services statewide plus an additional $55 an hour for inspection services by the state land bank.

Ellentuck, who has lawsuits pending against both the city and state land banks for payment, was charged in December after an investigation by the Michigan Attorney General’s Office.

According to Lavigne, the charges are political and were brought against his client one day after Ellentuck himself had gone to officials with the city and state land banks about his concerns of overbillings by three companies known in Metro Detroit demolition circles as the “Big Three.”

The Big Three are Adamo Group and Homrich, both of Detroit, and MCM of Bloomfield Hills.

“For unknown reasons, those accusations or contracts were never investigated,” Lavigne said. “Instead, they (state investigators) never interviewed one person outside of McCarthy and based on his accusations, charged my client.”

In a preliminary district court examination in February, Ellentuck revealed he had secretly recorded conversations with McCarthy and others that contradict their statements regarding his alleged wrongdoing.

Additionally, Ellentuck recorded conversations with a Michigan Land Bank official in which he sought to have the state look into broader overbilling by the companies.

Potts ruled Monday the recordings would not be permitted in as evidence in the case.

“I’m not going to get into other cases or which other people were involved in illegal schemes — I don’t care and the jury shouldn’t care,” Potts said.

Potts told Lavigne the question of importance in the Ellentuck case remained: “Did he (Ellentuck) intend to do what he allegedly did?”

Testimony in the Ellentuck case is scheduled to continue Tuesday.