Dog owners with their furry friends in tow while in downtown Ferndale now have a safe place to keep them while they dine, shop or do business. 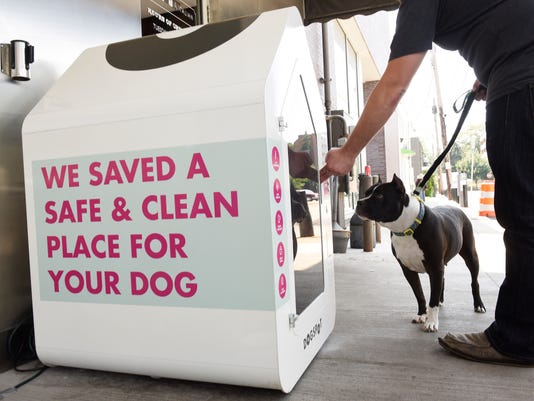 Dog owners with their furry friends in tow while in downtown Ferndale now have a safe place to keep them while they dine, shop or do business.

Ferndale is among a growing number of cities catering to pampered pups by offering air-conditioned dog houses in a public space.

DogSpot, the Brooklyn-based creators of the houses, placed one at Rosie O’Grady’s and another at Pop’s for Italian, both on Nine Mile, this week.

“The city is very walkable,” said Shane Hudson, marketing manager for Kramer Restaurant Group, which owns both restaurants. “I think this just adds to the walkability of the city.”

The houses are part of a movement nationally to create more dog-friendly communities. The placement of the temperature controlled, secured structures also comes as Michigan experiences record-breaking high temperatures and animal welfare advocates warn to keep pets safe in the heat.

“Tying dogs up outside, pretending their service animals, leaving them in the car… All those workarounds dog owners use are unsafe or illegal,” said Rebecca Eyre, spokeswoman for DogSpot, which launched two years ago.

Sessions for the dog houses are reserved via the DogSpot app. Each house features air conditioning, heat and auto-sanitizing UV lights. An owner can monitor the dog from an in-app puppy camera. Service technicians are on call to fix any technical issue that may arise. There are other safety measures in place, such as in cases where an owner may fail to return.

“These are our family members, our beloveds in these dog houses,” Eyre said. “We’ve develop relationships with local animal shelters, local veterinarians who could make sure the dog is safe within a reasonable amount of time.” 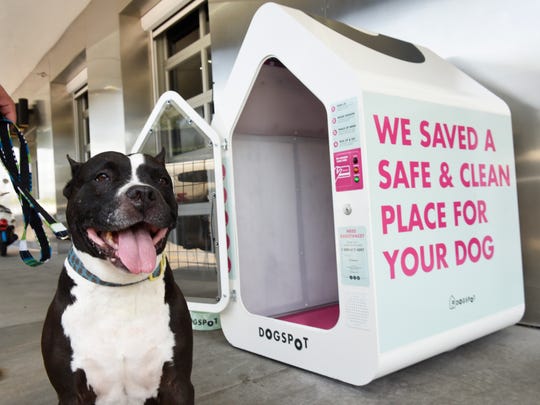 Each session is 30 cents a minute and are limited to a 90-minute session.

The concept first caught Hudson’s attention last fall via a viral video. He reached out to DogSpot to see if the houses were available nationally. Earlier this year, the company called him to let him know it was going to expand.

The company has had interest from businesses and developers in Northville, Plymouth and Ann Arbor, Eyre said. She declined to disclose names pending contracts.

The dog houses in Ferndale are on private property at the rear of each restaurant. Users don’t have to be patrons of the restaurants to use the service, however.

“I think if I were a resident in the area and I put a carryout in, I know I can kill two birds with one stone,” said Hudson adding that there is a feature on the DogSpot app that allows users to reserve the house 15 minutes in advance.

There are nearly 85 million families that own pets in the United States, according to the 2017-2018 National Pet Owners Survey conducted by the American Pet Products Association.

There has been much innovation in trying to make cities more pet friendly, said Angel May, corporate citizenship lead for Mars PetCare US, whose Better Cities for Pets program has outlined traits of pet-friendly cities. Among those traits are businesses that make it easier for people to be out with their pets.

“As the younger generations comes up they’re waiting to have kids longer,” she said. “They’re replacing kids with pets in a lot of ways. They want to carry their pets in tow when they go shopping, when they go out to eat, when they go on vacation.”

Kaitlin Lulofs of Ferndale said she regularly walks with her 1.5-year-old Cocker Spaniel Noah as she doesn’t have a car.

“It’s a great idea,” she said. “My most biggest concern is how clean can they be.”

In Ferndale, the restaurant employees clean each dog house daily.

Lynne Keener of Ferndale said she  walks her 2-year-old English Cream retriever Finnegan, as well as other dogs, downtown. She never leaves her dog unattended. If there’s no one with her to watch him, it limits the businesses she can visit.

“I hate to see dogs tied up to poles,” she said. “People steal dogs. You don’t know what they’ll do to the dogs. They feed them, they give them stuff.”

Keener said she wonders if some dogs will be nervous in the house. She would first test it out with Finnegan to gauge his reaction.

“I have to check it out see if I would use it for dogs,” she said. “I think it’s a great concept.”