RTA's transit plan fails to get support for November ballot

RTA's transit plan fails to get support for November ballot 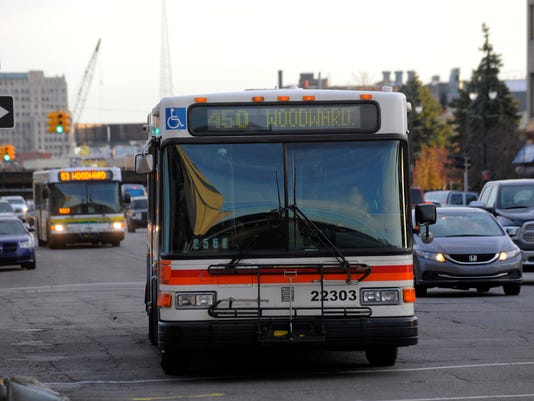 The Regional Transit Authority of Southeast Michigan chose not to move ahead with a version of a master plan for regional mass transit.(Photo: Steve Perez / The Detroit News)Buy Photo

It appears voters will not weigh in on a regional mass transit plan in November after the Regional Transit Authority of Southeast Michigan failed to drum up enough support from its members.

The RTA met Thursday to consider the proposed Connect Southeast Michigan Plan with hopes of placing it on the Nov. 6 ballot, but it failed to even make it out of committee because of a lack of support from Oakland and Macomb representatives.

"We're obviously disappointed because we could not reach a consensus on a master plan for 2018," RTA Chairman Paul Hillegonds said. "But I don't think anyone sitting at this table doesn't believe we have to do better as a region.

The four-county plan was put together after a prior regional transit master plan narrowly failed in November 2016.

Over the last four months, the RTA refined a draft of the plan originally released for comment in April but still struggled in the interim to win support from Oakland and Macomb leaders.

The plan for Wayne, Oakland, Macomb and Washtenaw counties included a 20-year property tax at 1.5 mills, which would have generated $5.4 billion in millage revenue and leveraged an additional $1.4 billion in state, federal and fare revenues for investment regional transit.

It called for a new rapid transit bus service along 15 high-frequency corridors, express routes and an Ann Arbor-Detroit commuter rail line. It also sought “hometown service” funding for communities like Addison or Independence Township that weren't be covered by new bus routes.

The plan would have provided $170 million a year in operating funding while investing $696 million for infrastructure. The tax would have cost owners of the average house worth $157,504 in the region $118 a year.

“The vote on the RTA plan should come as no surprise," Patterson said in a statement Thursday.

"I wasn’t going to drag into the taxing footprint my 38 opt-out communities — just as Detroit opted out of SMART. Regional transit discussions are ongoing, but our position remains the same as it was in May of 2017. The RTA legislation needs to be amended to reduce the taxing footprint and offer further governance protections on the RTA board.”

Before the RTA's board of directors meeting on Thursday, Oakland County Treasurer Andy Meisner issued a statement, splitting with Patterson in favor of placing the issue before voters.

Meisner said 234,000 Oakland County residents need to leave Oakland County every day to get to work but don’t have a regional mobility system as an option.

“Major Oakland County employers like Beaumont Hospital are calling for a regional mobility system,” he said. “Almost every community in Oakland County already invests in mobility for its citizens, but not adequately to meet current and future demand. This deprives our communities and taxpayers of a powerful economy of scale that would be achieved by regional purchasing of these services.”

That prompted return fire from Patterson.

John Paul Rea, Macomb County's deputy county executive and director of planning and economic development, was part of the transit talks for the county. Rea emphasized the need for a different transit millage before voters.

“Today was another step in a complex process involving regional mass transit," he said. "A lot of people will look at this as there being winners and losers. But we’re still committed to addressing transit in southeast Michigan, and that starts with the SMART millage in August.”

Evans said Thursday the plan was "torpedoed by short-sighted politics" after negotiations were made in "good faith."

"The drumbeat of support will be kept alive by our undeniable need for true regional transit, both for our cities and suburbs," Evans said in a statement. "The silver lining is that communities, including some opt-outs, are considering their transit needs more than ever before, and I’m confident we will get it done moving forward.”

Dave Massaron, Detroit's chief operating officer, in a statement indicated the battle for regional transit will be renewed next year.

“We are disappointed in the results of today’s RTA board action," Massaron said. "We believe the voters deserve the right to consider this plan. This region desperately needs investment in transit to stay competitive. The city will continue to invest in its system and will work to find a regional solution in 2019.”

Washtenaw County released a statement through its transit officials and blamed Oakland and Macomb for preventing voters from the opportunity to weigh in: "With their actions today, the leaders in Oakland and Macomb have shown they are willing to trade short-term political needs for long-term benefits to our region and state. We will not stop working with them to try and find a solution, but they will be held accountable by voters and by history.”

“We are disappointed that the southeast Michigan leaders represented on the Regional Transit Authority were unable to agree upon a plan to move our region’s transit system forward," they said.

"When the quality of transit systems in large urban areas across our country are ranked, our region’s transit system consistently falls near the bottom of the list — and that state of affairs is badly complicating life for many of our citizens."

Rip Rapson, president and CEO of the Kresge Foundation, added town hall meetings held across the region produced "a strong desire to see the question on the ballot."

"Oakland and Macomb county have short-circuited an all-important vote for our community — this time," Rapson said in a statement.

"Rest assured that those of us who do believe in a unified, comprehensive regional transit system — which is to say, in a unified regional future — are saddened but not daunted by what happened today. Our commitment to that goal is undiminished."

The $4.6 billion millage that appeared on the 2016 ballot failed 50.5 percent to 49.5 percent. Washtenaw and Wayne counties favored the millage, Oakland County voters were split and Macomb County strongly rejected it.

The lack of transit hurt Detroit's Amazon bid for the online retailer's second headquarters, according to those who constructed the city's offering.

"I believe one day we will have regional transit," Hillegonds said. "In spite of our inability today, there is more awareness of a need for public support for true regional transit. We need to keep working together toward that end."