Sept. 11 heroes saluted in Oakland County: 'We should never forget'

First-responders, their families and friends turned out Tuesday for a Sept. 11 "Remembrance Ceremony" at the Michigan Fallen Heroes Memorial

Sept. 11 heroes saluted in Oakland County: 'We should never forget' 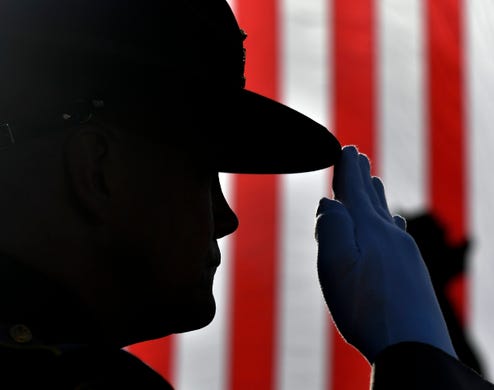 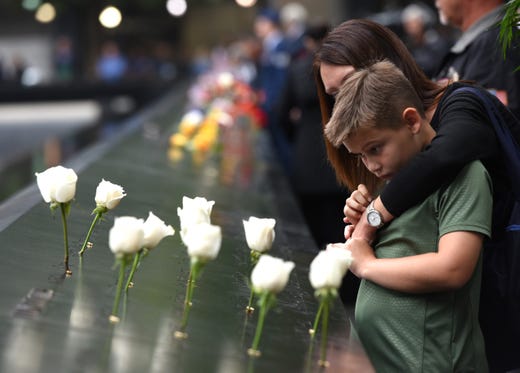 A young boy and his mother looks down into the South Pool during observances on September 11, 2018 held on the 17th anniversary of the September 11, 2001, terror attacks at the annual ceremony at the Ground Zero memorial site. TIMOTHY A. CLARY, AFP/Getty Images
Fullscreen 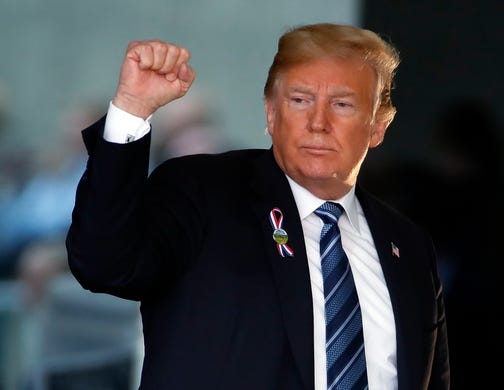 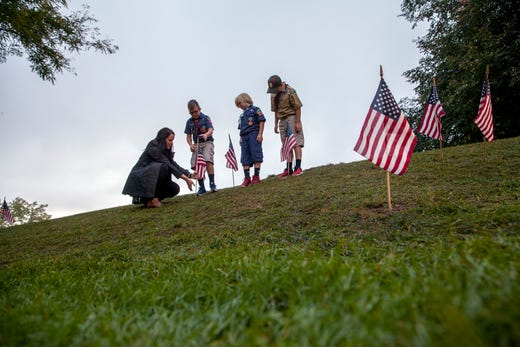 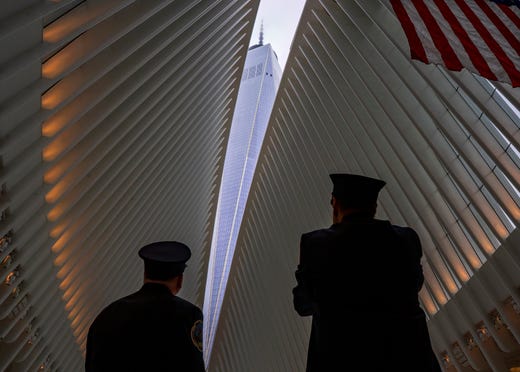 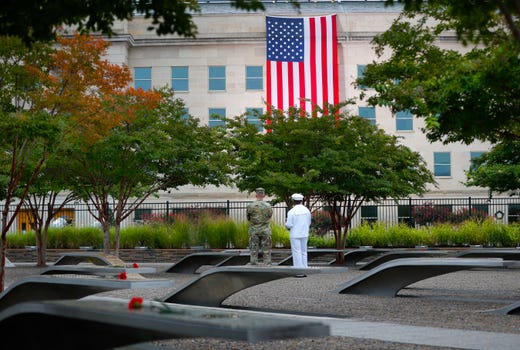 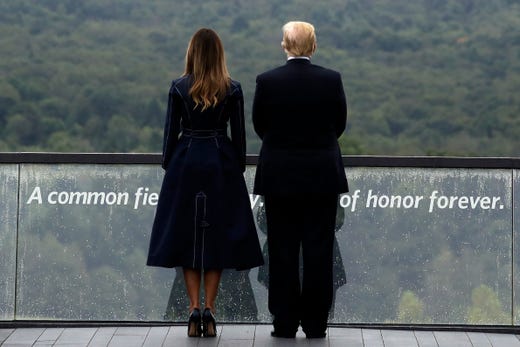 Staff Sgt. Thomas Frounfelker kisses his son Parker, 3, on the forehead during a Sept. 11 memorial service at Dr. Bryan C. Jack Elementary School in Tyler, Texas, on Tuesday, Sept. 11, 2018. Frounfelker also attended the ceremony with his wife Rhena and daughter Kaitlynn, 9, a student at Jack Elementary. The student-led program featured patriotic songs and a tribute to the namesake of the school, as well as honored local veterans and those currently serving. Chelsea Purgahn, AP
Fullscreen 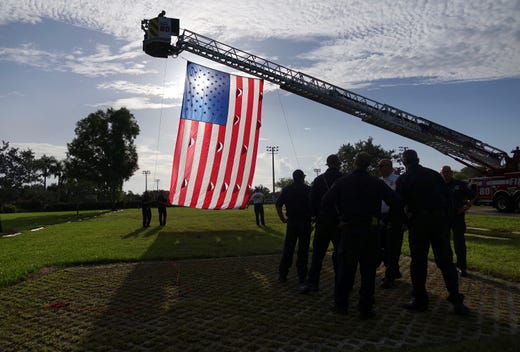 A Coral Springs/Parkland Fire and Rescue ladder truck raises an American flag prior to the 9/11 memorial service in Coral Springs, Fla., Tuesday, Sept. 11, 2018. Americans looked back on 9/11 Tuesday with tears and somber tributes as President Donald Trump hailed "the moment when America fought back" on one of the hijacked planes used as weapons in the deadliest terror attack on U.S. soil. Joe Cavaretta, AP
Fullscreen 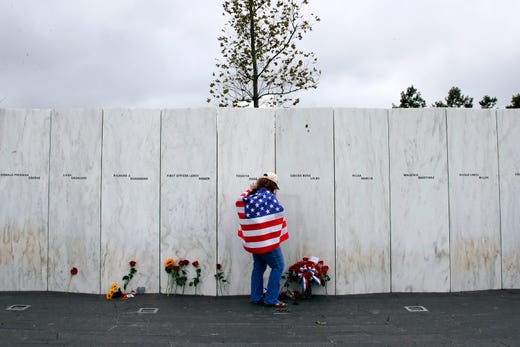 Chrissy Bortz of Latrobe, Pa., pays her respects at the Wall of Names at the Flight 93 National Memorial in Shanksville, Pa. after a Service of Remembrance Tuesday, Sept. 11, 2018, as the nation marks the 17th anniversary of the Sept. 11, 2001 attacks. The Wall of Names honor the 40 people killed in the crash of Flight 93. Gene J. Puskar, AP
Fullscreen 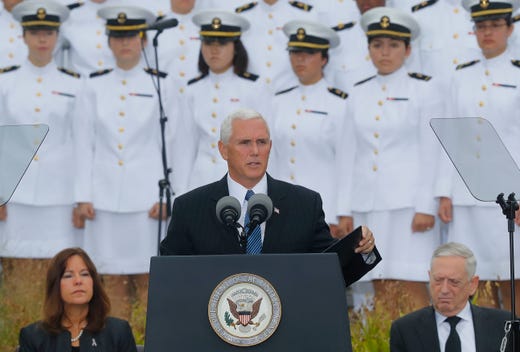 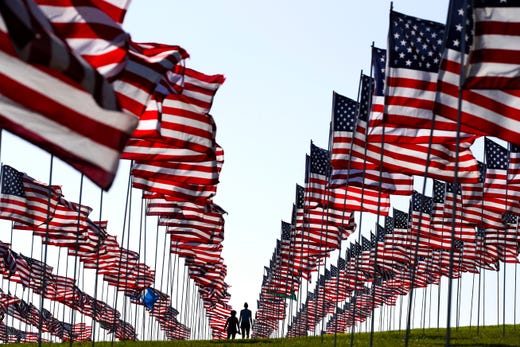 Bianca Burton, center left, and Erin Schultheis walk around the Pepperdine University's annual display of flags honoring the victims of the 9/11 terrorist attacks, Monday, Sept. 10, 2018, in Malibu, Calif. Terrorists used hijacked planes to crash Sept. 11, 2001, into the World Trade Centers, the Pentagon and a field in Pennsylvania. Nearly 3,000 people were killed in the attacks. Jae C. Hong, AP
Fullscreen 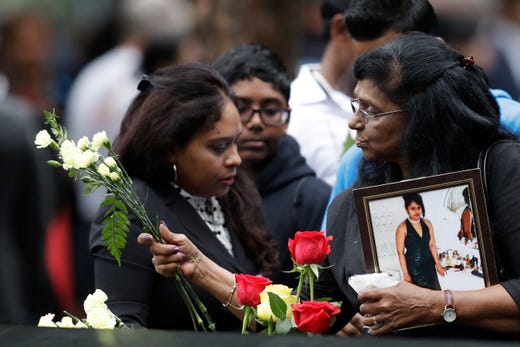 A woman leaves flowers at the North Pool during a ceremony marking the 17th anniversary of the terrorist attacks on the United States on Tuesday, Sept. 11, 2018, in New York. Mark Lennihan, AP
Fullscreen 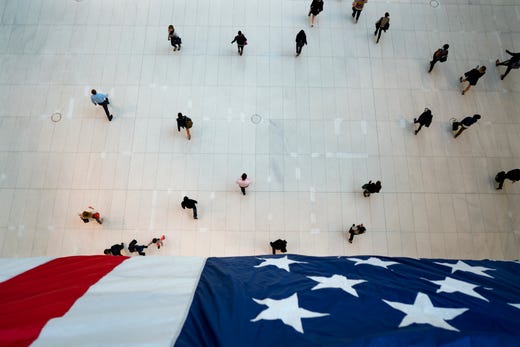 People walk under an American flag inside the Oculus, part of the World Trade Center transportation hub, on the anniversary of 9/11 terrorist attacks in New York on Tuesday, Sept. 11, 2018. Craig Ruttle, AP
Fullscreen 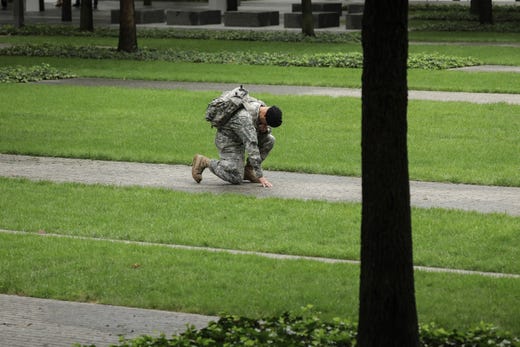 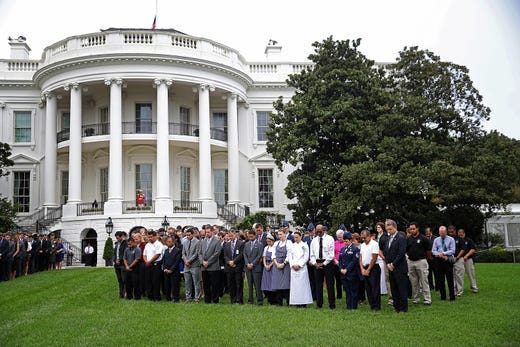 Members of the White House staff observe a moment of silence on the south lawn of the White House at 8:37 A.M., the time the first tower was hit in the attacks of September 11th, on September 11, 2018 in Washington, DC. Today marks the 17th anniversary of the attacks and U.S. President Trump is scheduled to attend events in Shanksville, Pennsylvania. Win McNamee, Getty Images
Fullscreen 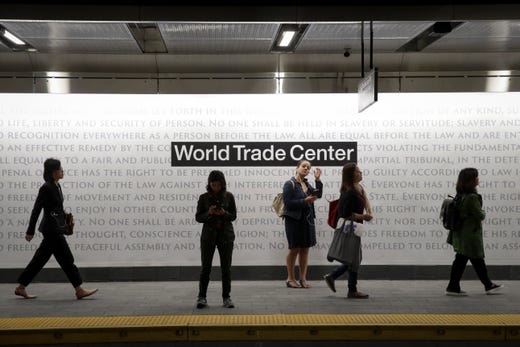 People wait for a train on the platform at the newly opened Cortland Street 1 train station September 10, 2018 in New York City. The Cortland Street 1 train station was buried in debris following the 9/11 terrorist attacks and had been closed since that day 17 years ago. The newly renovated version of the station opened on Saturday. Drew Angerer, Getty Images
Fullscreen 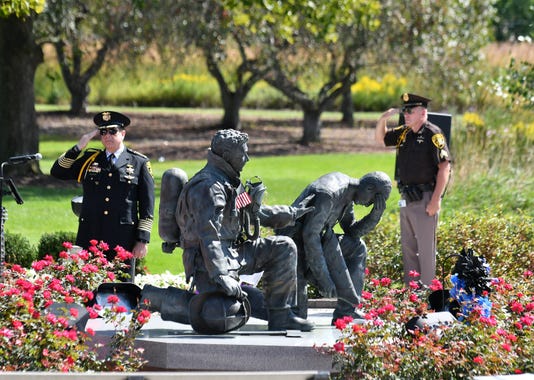 Pontiac – Several hundred first-responders, their families and friends turned out Tuesday afternoon for a Sept. 11 "Remembrance Ceremony" at the Michigan Fallen Heroes Memorial outside the Oakland County Sheriff’s Office.

There were traditional bagpipes and drums, flag-raising, speeches and remembrance of police officers and firefighters who died 17 years ago when terrorists slammed aircraft into the World Trade Center in New York City and the Pentagon in Washington, D.C. There were also heartfelt words expressed over local police officers and firefighters who have made the ultimate sacrifice.

The Fallen Heroes Memorial – constructed to honor Michigan men and women in public safety who have died in the line of duty -- was a fitting location for the Patriot Day event and a double draw for people like Daryl Repuhn, 68, of Waterford Township, who scanned the engraved names on a wall for that of an uncle, Calvin Coolidge Baxter, who died in a bowling alley fire in October 1956.

Baxter, Keego Harbor’s first police chief, was only 31 and left behind a wife and two children.

“This is really nice but I wish they would make today a national holiday,” said Repuhn, who described himself as a retired house husband. “I wanted to see my uncle’s name on the memorial but like everyone else can remember where I was on Sept. 11, 2001, when my wife told me to turn on a TV.

“Everything came to a standstill – it's like the power went out and everyone froze,” said Repuhn. “We should never forget any of them.”

West Bloomfield Township Police Chief Mike Patton stared at a name of a fellow officer, Patrick John O’Rourke, who was fatally shot on Sept. 19, 2012, when answering a welfare run on a distraught resident. The man, who refused pleas from his family and police to surrender, instead opened fire through a door and wall.

“John was only 39 years old, a father of four – his youngest was eight months old and never got to know his father,” said Patton. “He’s the only one of the township’s officers to ever die in the line of duty. It floored us and people still come into the station and look at his photo and a memorial we have on the wall.”

Oakland County Sheriff's Capt. Doug Molinar was part of a contingent of officers who traveled to New York City the day after Sept. 11. Seventeen years later, what he saw there still affects him.

“I had been to New York just a year before and as part of an FBI Academy was taken on a tour of the World Trade Center and shown all the upgraded security installed after an earlier incident when someone had attempted to blow up the building with a bomb in the underground parking structure,” he recalled. “All the security improvements were done so ‘nothing like that could ever happen again.'"

The day after the planes hit the twin skyscrapers, “It was all nothing but rubble, cinder and ashes,” Molinar recalled. “It was surreal.

“We were on a bucket brigade and there seemed to be no end of it,” he said. “We wore masks but your clothes, your face, everything was coated with ash.

“That day (Sept. 11) was like Pearl Harbor,” Molinar said. “It changed the world forever. These type of ceremonies are the least we can do to give thanks to all the people who died and those who tried to save them and lost their lives.”

Oakland County Sheriff Michael Bouchard said it is always his hope that they don’t need to add another name to the wall, which lists 844 police and firefighters in Michigan who have died in the line of duty.

“It’s a reminder to all the men and women who put on the uniform every day because they care enough to do a dangerous job,” said Bouchard. “It’s a memorial to all of them but it's also painful to their families. An empty hole has been left in their hearts.”

Following 90 minutes of remembrance, a 21-gun salute was fired by the sheriff’s office honor guard, there was a helicopter flyover and deputy James Gregory played “Taps.”

The Metro Detroit Police and Fire Pipes and Drums played “Amazing Grace,” as they have for too many funerals, said one piper, David Wurtz, a retired detective from the sheriff’s office. The group has appeared at two officers’ funerals this summer in Metro Detroit.

“But it's always an honor, especially like today,” said Wurtz.