L. Brooks Patterson not sure yet on 2020 re-election bid

Republican Oakland County Executive L. Brooks Patterson said he will have to consider several circumstances before deciding to run for re-election

L. Brooks Patterson not sure yet on 2020 re-election bid 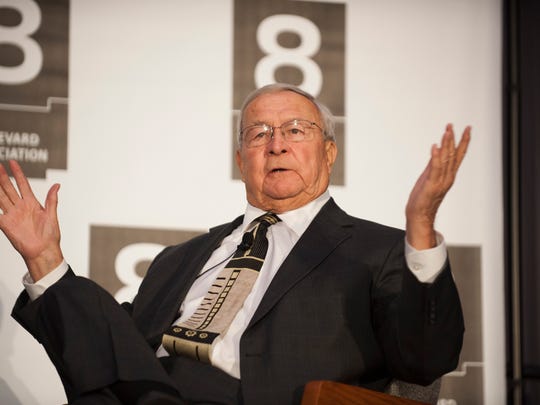 Oakland County’s longtime executive isn’t saying just yet whether he’ll try to retain his seat in 2020.

On Thursday, Executive L. Brooks Patterson said he will have to consider several circumstances before he makes an announcement regarding 2020, including his staff’s willingness to stick it out for an eighth term.

“It depends on a lot of things,” Patterson said.

Patterson, who has only worked with GOP-controlled boards since he was elected in 1992, is working this year with a majority of Democratic county commissioners.

Meisner confirmed Friday he's considering a run for executive in 2020. The Huntington Woods Democrat has served as treasurer since 2009 and was a state representative prior to that.

The county is at a "crossroads," and residents want more cooperation with neighboring counties, diversity and regional transit, he said.

"There are a lot of people who want a lot less personality in the public's service and more results," Meisner said. "We have a tremendous foundation in Oakland County, but we’ve also got some areas to really shore up.”

Woodward said Friday he was “very interested” in joining the 2020 race to deliver the “strong progressive leadership” voters showed they wanted in the 2018 election. The Royal Oak Democrat chairs the Oakland County Board of Commissioners, is a past leader of the Oakland County Democratic Party and a former legislator.

“I’m deeply committed and working every day to make sure the prosperity of Oakland County is available to every person, every man, woman and child,” Woodward said.

Patterson, 80, blamed the GOP November election loss of two state House seats and two state Senate seats in the county on anti-Trump sentiment and changing demographics as Detroiters “moved to Oakland County and brought their politics with them.”

The Democrats who swept up the top of the ticket in November will no doubt have “big differences” from the GOP leaders who were running Michigan alongside Republican Gov. Rick Snyder, Patterson said. Proposed tax increases may be on the horizon to honor Democratic Gov. Gretchen Whitmer’s campaign promise to “fix the damn roads,” he noted.

“I likely won’t buy into those,” Patterson said.

The octogenarian said he’s known Whitmer for years and opposed her grandfather, former Pontiac schools Superintendent Dana Whitmer, in the 1970s when the school district was ordered by a federal judge to start the busing of area students to end segregation.

Patterson was a private attorney at the time for the anti-busing organization, the National Action Group, who argued that the forced busing of suburban children to under-performing urban school systems was an "experiment in social engineering."

In 1974, the U.S. Supreme Court issued a ruling against Detroit's court-ordered busing plan that effectively ended busing efforts in Pontiac and elsewhere nationally to try to integrate urban schools with suburban children.

Patterson had fond memories of the “friendly” superintendent, noting that debating him was “like debating Santa Claus.”

Despite his opposition to some of the new governor's policies, Patterson had kind words about Whitmer, whom he noted would be participating in the Brooksie Way Chill at the Mills 5K Jan. 20 during the Fire & Ice Festival in Rochester.

“I thought that was a hell of a nice gesture on her part,” he said.