Kathryn Houghtaling, fired this week for alleged inappropriate activity with two students, was released from custody after posting bond 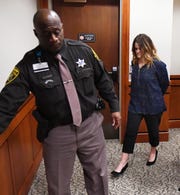 Teacher Kathryn Houghtaling is led from the court into lockup after her arraignment on charges of sexual misconduct with Rochester High School students at 52-3 District Court in Rochester Hills, Friday. (Photo: Daniel Mears, The Detroit News)

Kathryn Houghtaling, 26, of Sterling Heights was arraigned before Rochester Hills 52-3 District Judge Lisa Asadoorian on six counts of third-degree criminal sexual conduct. Houghtaling was a special education teacher for one of the alleged victims.

Houghtaling's bond was set at $200,000, due to the seriousness of the charges, Asadoorian said.

Asadoorian set a number of conditions for her release, including no contact with the alleged victims and no use of alcohol or drugs. She also ordered that the ex-teacher submit to random testing and wear an electric tether to insure her activities are limited to court and medical appointments. 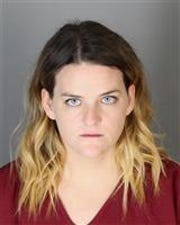 “You are banned from the premises of Rochester Public Schools and any public school,” said Asadoorian, who also said Houghtaling could not leave the state.

The Oakland County Sheriff's Office said Friday that a parent of a student came across a video of a teacher “partying” with students involving alcohol and marijuana and reported it to authorities. When confronted, the teacher admitted having sex with two students, 16 and 17 years old, the sheriff's office said.

During her arraignment Friday, Houghtaling’s attorney, Zachary R. Glaza, had requested his client be released to the custody of her husband, parents or friends, with whatever bond conditions Asadoorian considered appropriate. He said Houghtaling posed no flight risk, had no criminal history and no mental health or substance abuse issues.

District representatives would only say the alleged incidents happened after school hours and officials immediately launched an investigation as soon as they learned about them.

Houghtaling was terminated immediately after an internal investigation, according to the district.

Houghtaling is scheduled to return to court on Jan. 24 for a probable cause conference and a Jan. 30 preliminary exam.