Novi man accused of spying is represented by Russia-appointed lawyer

The family of Paul Whelan, the Novi man held in Moscow, is concerned about his legal representation by a Russia-appointed lawyer.

Novi man accused of spying is represented by Russia-appointed lawyer 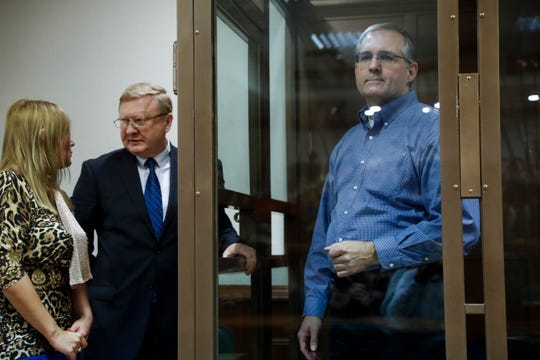 Paul Whelan, a former U.S. Marine, who was arrested in Moscow at the end of last year, right, looks through a cage's glass as his lawyers talk to each other in a court room in Moscow, Russia, Tuesday, Jan. 22, 2019. (Photo: Pavel Golovkin, AP)

Washington — The family of the Novi man held in a Russian prison sounds frustrated by the Russia-appointed attorney representing him in court, but is not advocating for a change in counsel at this time.

Former U.S. Marine Paul Whelan, 48, was arrested Dec. 28 in Moscow on charges of spying. On Tuesday, a Russian judge refused to release Whelan on bail after a closed-door hearing.

His family has said he's being wrongfully detained and was entrapped. Spying charges in Russia carry a sentence of up to 20 years in prison.

Whelan's twin brother, David, said Canadian consular staff who met with Paul at Lefortovo Prison on Thursday confirmed what his family had suspected — that his attorney was "chosen for him."

"We remain in the dark about who made the choice if Paul didn't," David Whelan said in a statement.

"Paul's inability to speak Russian continues to make communication in prison difficult, and he is concerned that he has only seen his lawyer, who doesn't speak English, twice since he was arrested."

Whelan's Russian lawyer, Vladimir Zherebenkov, was quoted Tuesday by The Washington Post this week saying Whelan was given a flash drive containing a "state secret."

Zherebenkov told reporters in court: “How he got [the flash drive], what he was supposed to do with it, and whether Whelan knew that he had secret information is unknown."

According to the Post, Zherebenkov said Whelan had expected the flash drive to contain photographs and videos of a previous trip to Russia, and maintains his innocence.

“He only spoke to regular people in Russia,” Zherebenkov told the Post.

Whelan holds U.S., Canadian, British and Irish citizenships, and Zherebenkov said investigators have not yet disclosed for which country he is accused of spying.

Whelan's family has said he was in Moscow for a friend's wedding when he was taken into custody in a hotel room.

David Whelan said he had communicated with an English-speaking lawyer named Olga Karlova, who said she is now part of the defense team with Zherebenkov and  Zherebenkov's son, Roman.

David said the Canadian officials' left a list of "alternative Russian lawyers, should Paul decide he needs a change of counsel," to be translated and reviewed by the prison and given to Paul Whelan.

"We are hopeful he will be given the list as it is our understanding under Article 50 of the Criminal Procedure Code that it is Paul's right to select his defense counsel," David Whelan said.

"Our family is not advocating for or against a change in counsel, but we believe Paul's right to choose should be respected."

The statement said Paul Whelan was concerned about his medical care and legal representation.

"The uncertainty around his lawyer, and the investigator's continued prohibition on allowing Paul to consider the U.S. Embassy's Privacy Act waiver, underscore how critical continued consular access is for Paul," the statement said.

"We continue to urge Russia to follow international law and provide for swift, fair, and transparent judicial processes for all detained U.S. citizens in Russia," the spokesman said.

Whelan is the head of global security for Auburn Hills-based Borg Warner, an auto parts supplier.