She wanted her cars and property to be supervised by one son; and artwork, copyrights and music royalties to be shared by all her sons 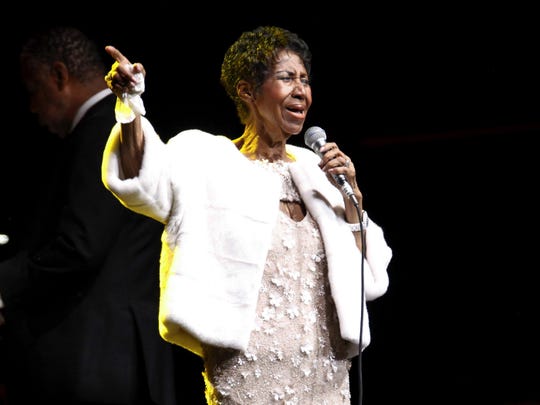 Pontiac — Three handwritten wills have been found in one of the homes of the late Queen of Soul Aretha Franklin, all with a theme of providing for her four sons and even commentary involving others she felt were insincere or "grossly inefficient," according to the documents.

Franklin, who died in August of pancreatic cancer, was thought not to have left a will, despite being survived by four adult sons.

But the Oakland County Probate Court documents suggest the legendary singer had been giving considerable thought about what she wanted to leave behind to her heirs if the wills are found to have been written by her. Two found in a locked cabinet were from 2010, eight years before her death.

This photo shows one of three handwritten wills that a lawyer said were found in the home of Aretha Franklin in Pontiac months after her death. (Photo: Ed White, AP)

The information was contained in legal filings Monday by two attorneys in the case, David J. Bennett and Kevin M. Check, co-counsels for the personal representative of the estate, Franklin’s niece, Sabrina Garrett Owens. Bennett, Franklin's lawyer for more than 40 years, filed the wills on Monday.

According to the documents, on May 3, Garrett Owens “while continuing her examination of the home, discovered a key to a locked cabinet that she had been previously unable to gain access or open.” Inside, Garrett Owens found “two purported Holographic Wills dated June 21, 2010 and October 20, 2010.” Garrett Owens also reached under the cushions of a living room couch and discovered a spiral notebook containing another purported holographic will dated March 31, 2014.”

The Oakland Court filing indicates all the heirs and their counsel “have been unable to reach a resolution with each other over the admission, validity and dispositive provisions of the purported Holographic Wills.”

Unlike traditional wills, the signing of holographic wills are not witnessed and are probated in several states, including Michigan, providing they are authenticated by other means, including verification of handwriting and the intended wishes they contain.

Garrett Owens is seeking direction from Oakland County Probate Judge Jennifer S. Callaghan on how to continue as personal representative in the matter. A hearing is scheduled for June 12.

“She remains neutral and wishes that all parties involved make wise choices on behalf of their mother, her rich legacy, the family and the Aretha Franklin estate,” a statement said of Garrett Owens, according to the Associated Press.

None of the parties could be reached for comment Monday by The Detroit News. Voice mails and emails were not returned by Garrett Owens’ attorneys.

The findings could prompt confusion by this latest chapter in Franklin’s life. Much of the handwritten instructions are hard to read and perhaps more difficult to interpret. If written by Franklin personally, some sections contain asides about relatives, attorneys, and even a “Ha, Ha, Ha” and “BS” when describing someone she apparently felt had been less than sincere with her. In an another aside, she expresses one specific attorney had been “grossly inefficient.”

Each document begins with “being in sound mind and physical health” pronouncement — one noted with “with the exception of high blood pressure, a mass on the pancreas, diabetes …”

Franklin wanted her cars and property to be supervised by one son; and artwork, copyrights and future royalties from her music to be shared equally by all her sons. She also wanted her sons to have her personal papers, awards and gold records. One provision was that two of her sons “must take business administration classes and get a certificate or degree.” She specifically mentions grandchildren also are to be gifted.

The only dollar figure listed in the paperwork is a $1.6 million bank account. Yet Franklin’s total worth from her various properties, jewelry, royalties and more have been generally estimated at around $80 million.

The Internal Revenue Service has claimed it is owned more than $6.3 million in back taxes. Bennett insists Franklin made good on all her debts, including several million dollars in federal taxes sought by the IRS.

Adam Zuwerink, an attorney on the state's west side with expertise in estate planning, notes that "the closer a document comes to meeting the formal requirements of a will, the more likely it will be treated as legally binding."

That means a handwritten letter signed and dated in front of someone else would likely be admitted, but unsigned and undated notes part of a larger diary might not, Zuwerink said.

He added: "But even if a handwritten will is determined to be inadmissible by the probate court, Michigan law allows for any plan of estate distribution that is agreed to among all of the heirs. On many occasions, the handwritten notes of the deceased person to their loved ones are followed, even if it is not legally required. The largest challenge comes when the document left behind does not treat all of the beneficiaries equally, and provides negative personal commentary about other people that is not normally found in a will prepared by an attorney."