Sherry Hoover says rules that took effect April 1 are causing her to go without medicine she needs to alleviate the effects of her cancer. 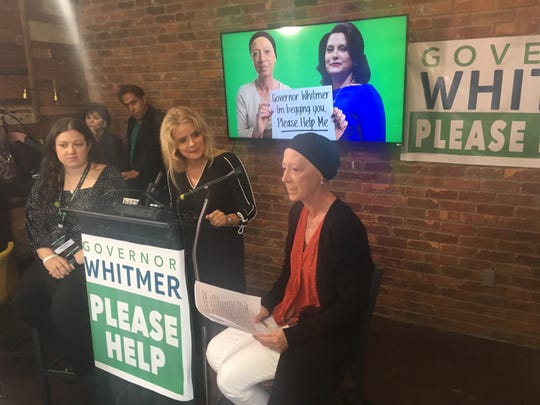 Correction: This story has been updated to correct the spelling of the last name of David Harns, a spokesman for the Michigan Department of Licensing and Regulatory Affairs.

Royal Oak — A 57-year-old retired nurse with stage 4 cancer filed a federal lawsuit Wednesday seeking a temporary restraining order that would allow her access to marijuana-based medicine she says she hasn’t been able to get since the state imposed heavier restrictions on it.

Sherry Hoover was diagnosed in 2011 with mastocytosis leukemia. She used Vicodin, Norco, Fentanyl patches and other painkillers before discovering that medical marijuana increased her appetite and helped her sleep, while also alleviating the pain.

Until April 1, the state Licensing And Regulatory Agency, the defendant in the lawsuit, allowed untested marijuana products, such as tinctures and RSOs (Rick Simpson Oil) to be sold at marijuana dispensaries without being tested. But the state mandated that after the deadline, those products had to be tested before being sold.

Wednesday’s lawsuit, which doesn’t seek money, asks the state to again extend the period until Dec. 31, and until then, asks LARA to temporarily return to the pre-April 1 rules until a permanent solution can be found.

Hoover said the new rules are causing her to go without her medicine, because dispensaries are running out of the product while caregivers make the medicine and have it tested.

“Perhaps the last thing I ever dreamed of was suing the state of Michigan because they denied me the ability to purchase medicine which makes my life more livable,” Hoover said during a press conference in a Royal Oak coffee shop, in which she stood in front of a sign bearing the message “Governor Whitmer, please help.”

“I need my cannabis medicine, and the only two licensed dispensaries that carry the medicine I need are out,” Hoover said. “So, my only option is to purchase it on the black market.”

Hoover’s caregiver, Amy McKinnon-Glun, owner of Curing Corner in River Rouge, said: “There’s a shortage all over the place … it takes four months to grow a plant, and once it’s grown (the tinctures and other products need to be made), and then it needs to be tested.”

There are only four licensed testing facilities in Michigan, which McKinnon-Glun said isn’t enough to process the 300,000 medical marijuana patients in the state. In addition, medicine must be transported to the testing facility and then to dispensaries by licensed transportation companies, which creates “additional steps and delays for patient access,” the 29-page lawsuit said.

“It is LARA's sole obligation under the Administrative Procedures Act and the (Michigan Medical Marihuana Facilities Licensing Act) to modify and extend the Emergency Rules to … protect the health, safety, security and welfare of the Michigan public,” the lawsuit said.

The lawsuit claims LARA is violating Hoover’s due process rights under the U.S. and Michigan constitutions. “LARA has essentially prevented Plaintiff from obtaining her necessary and prescribed medical marijuana that she has a right and is authorized to obtain under Michigan law as a qualified medical marijuana patient,” the suit said.