Birmingham — Two Birmingham residents filed a federal lawsuit Monday alleging the city violated their free speech rights and the state's Open Meetings Act when officials stopped them from addressing the city commission this month about a proposed $57.4 million bond issue.

Clinton Baller of the Balance 4 Birmingham citizens’ group and David Bloom of the Birmingham Citizens for Responsible Government said they were both barred from speaking during a public comment section at the end of a July 8 city commission meeting.

Both wished to challenge the need for the bond proposal, which will go before voters Aug. 6, but were told they were out of order by city attorney Timothy Currier and Mayor Patricia Bordman, who abruptly closed the meeting with one blow of her gavel. Bordman and Currier are both named as defendants in the complaint.

Currier did not immediately respond Monday afternoon to a message seeking comment.

At the time, the officials said a contract between the city and the Birmingham-Bloomfield Cable Board, which films and streams the meetings, “prohibits political speech.” Currier said officials will not permit anyone to  “hijack” a meeting with their political views on a pending bond proposal.

Baller, a 39-year resident, said he wanted to know who was responsible for a mailer being sent to all of the city’s residents that he said illegally encouraged a “yes” vote on the proposal. “We’re educated. We’re affluent,” he said. “But apparently we have a few people in City Hall who think it's OK to trample on our constitutional rights.” 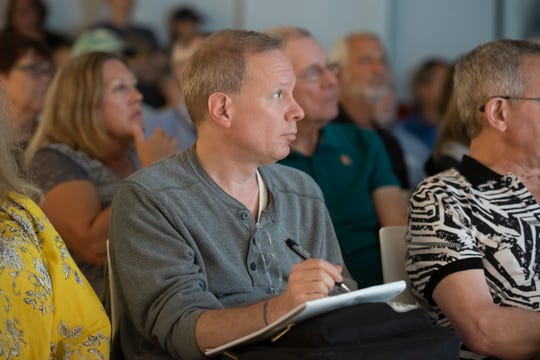 David Bloom, of the Birmingham Citizens for Responsible Government, listens during a community meeting about the new proposed parking structure. (Photo: David Guralnick, The Detroit News)

Bloom, a 20-year-resident, said he and Baller differ on various matters but agree a proposed public/private pact with Woodward Bates Partners for construction of a new parking deck is a “bad deal” for the city.

Bloom cited a section of state law that makes it a misdemeanor to mischaracterize local ballot questions and states that “a public body shall maintain strict neutrality in each election and that a public body or a person acting on behalf of a public body shall not attempt to influence the outcome of an election held in the state.”

Baller and Bloom want U.S. District Judge Victoria A. Roberts to declare the city's policy against "political" comments violates the First and 14th Amendments; to institute preliminary and permanent relief barring such actions and award damages and attorney costs to Baller and Bloom.

City officials have described the mailer as an educational document created by a city employee.

“It was appropriate and educational, something we have done before in special elections involving parks and millages,” Currier said earlier this month. “We state the facts for voters to consider. I don’t think it violates anything.”

Baller filed a complaint with the State Elections Board, which subsequently ruled the city did nothing wrong.

Under the development proposal, the current 50-year-old, 745-space parking facility, which sits on nearly 4 acres west of North Old Woodward near the city’s business district, would be transformed into a newer, bigger facility — three underground levels and six floors above ground — with 1,157 spaces.

Officials have said taxes would not be used for any aspect of the program, which would be funded by the city's Parking Systems fund and special assessments on surrounding businesses. The existing garage is one of five parking facilities operated by the city.

Not part of the ballot proposal, but discussed by city officials, is a 99-year development lease for $400,000 a year with the developers, who would also operate a mixed-use development of offices, businesses and residences.

Critics of the plan say with parking spaces allotted to the new tenants, there would be no net gain of spaces for visitors.