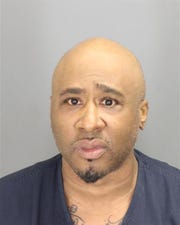 Pontiac — A Pontiac man has been charged in the May slaying of a Lansing man, Oakland County Sheriff Michael Bouchard said Wednesday.

Paul Anthony Hall, 46, was arraigned Tuesday on several charges, including murder, two counts of possessing of a firearm during the commission of a felony and being a felon possessing a firearm, in connection with the death of Eugene Bass Jr.

Authorities said Bass' body has not been recovered and deputies continue to search for it.

A judge ordered Hall held without bond and scheduled his next court appearance for August.

If convicted, Hall faces up to life in prison for the murder charge. The two counts of possessing a firearm during a felony are each punishable by up to two years in prison and being a felon in possession of a firearm is a five-year felony.

Officials said he has a long criminal record and has past convictions for delivery of a controlled substance, fleeing and eluding police, aggravated assault and domestic violence.

Eugene Bass hasn't been seen since meeting someone in Pontiac on May 23. (Photo: Crime Stoppers of Michigan)

Bass was shot and killed on May 23 in the area of Midland Drive and Michigan Avenue in Pontiac. He was 42 at the time.

Deputies with the sheriff's office were called to the area to respond to a shooting. They were told by witnesses a person in a silver Chevrolet Equinox had been shot in the driveway of a home on Midland.

Officials said the deputies searched, but could not find the vehicle or the victim. The home's owner was not present at the time of the incident, but told the deputies who owned the vehicle. After securing the scene, they found a spent shell casing in the driveway.

Deputies then went to a home in the 800 block of Palmer, which they believed to be the residence of the Equinox's owner. They found the vehicle as well as a large quantity of blood in its interior. It also appeared someone had tried to clean up the blood, according to authorities.

After searching the residence for a victim and not finding one, the deputies interviewed witnesses to the shooting and forensic technicians collected evidence. The technicians matched the blood in the vehicle to the victim.

The investigation led deputies to Hall and they took him into custody on unrelated charges.

Anyone with information about the victim's location should call Crime Stoppers of Michigan at (800) SPEAK-UP. A $1,000 reward is being offered for tips leading to the location.