Judge Daniel P. O'Brien tells attorneys he won't let them "take cuts" in front of other parties waiting to have their cases heard

Pontiac — An Oakland County judge denied a request Wednesday for a preliminary injunction aimed at overturning the appointment of County Executive David Coulter.

David Woodward, who resigned as chairman of the board of commissioners in order to be interviewed as a candidate for county executive, resumed his seat Aug. 16 and voted to appoint David Coulter to the county's top elected post. (Photo: Clarence Tabb Jr., The Detroit News)

Following a half-hour hearing of arguments, Judge Daniel P. O'Brien of Oakland County Circuit Court told attorneys some of their pleadings were "clear as mud" and declared he would not consider an injunction in what he viewed as a political battle.

"Have your partisan squabbles," O'Brien said. "But good luck in trying to enlist the judiciary as your patsy."

The Oakland County Republican Party and Commissioner Michael Spisz, R-Oxford, have filed a lawsuit over Woodward's decision to resign as a county commissioner, apply for the executive's job and then withdraw his resignation the day before a board vote to choose a successor to L. Brooks Patterson, who died Aug. 3.

Woodward reclaimed his seat — and position as board chairman — by casting the deciding vote to accept his withdrawal of his resignation. The board then appointed Coulter by an identical 11-10 party-line vote.

Woodward defended the actions taken by him and his colleagues.

"The Republican Party’s lawsuit is meritless and purely politically motivated, he said Wednesday. "We followed the rules. We followed the law. And we did our job. Now it’s time to do what people expect of us and put all of our focus back on the important work ahead."

Floyd Allen, a contract attorney representing the Board of Commissioners, told O'Brien that the board's actions and votes were all proper and no one had shown that "irreparable harm" had been done, an element in seeking a preliminary injunction.

Attorney Steven Haffner, who represents the Republicans, told O'Brien there was "no animus" against Coulter, who he described as a victim of Woodward's actions.

"The result of what he did is chaos in Oakland County government," Haffner told O'Brien.

"This has everything to do with sending a loud message to other public officials : 'Don't try to break the law or there will be consequences.'"

O'Brien told attorneys he was not going to permit them "to take cuts" in front of other constituents awaiting their respective "day in court" on other matters. 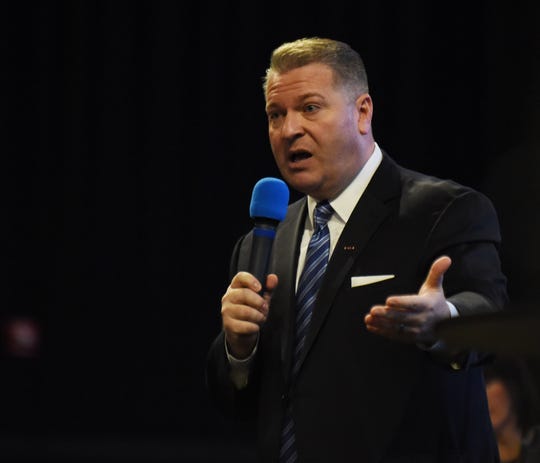 In a statement, Coulter applauded the judge's decision.

“I am pleased Judge O’Brien found the lawsuit was unlikely to succeed on its merits and denied the injunction," he said. "Today’s ruling allows us to continue the important work on behalf of the residents of Oakland County. I look forward to a final resolution in our favor soon.”

Despite not getting the injunction, both Spisz and Andrew "Rocky" Raczkowski, chairman of the Oakland County GOP, said they were happy with O'Brien's ruling.

"We are going to have a full hearing," Raczkowski said outside the courtroom. "I think it shows the judge is taking this seriously."

Spisz said while it may be difficult to continue to work with two people in county government he feels should not be in office, he has a duty to do his elected job until a final decision is made.

"I owe it to my constituents who elected me to represent them on all county matters," he said. "We believe that once we have a full hearing on the issues, the judge will agree."

No specific dates have been set for future hearings, which could lead up to a possible trial before a jury to ultimately decide issues.