Rep. Elissa Slotkin, the Holly Democrat, said on Twitter that she will support the two articles of impeachment against President Donald Trump

During a raucous constituent meeting inside the Oakland Center at Oakland University, Slotkin said she would stick to her decision regardless of what happens politically "because this is bigger than politics." 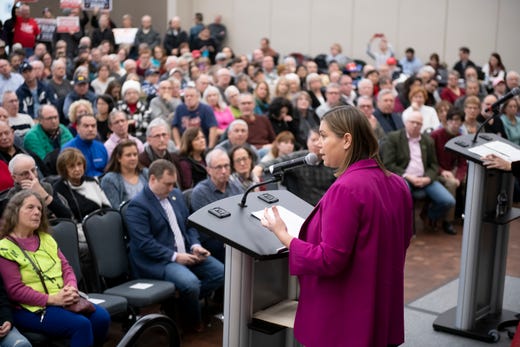 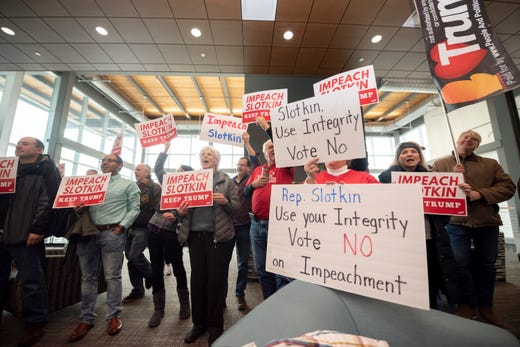 Pro-Trump supporters chant before the start of a constituent community conversation held by U.S. Rep. Elissa Slotkin at the Oakland Center, at Oakland University. David Guralnick, The Detroit News
Fullscreen 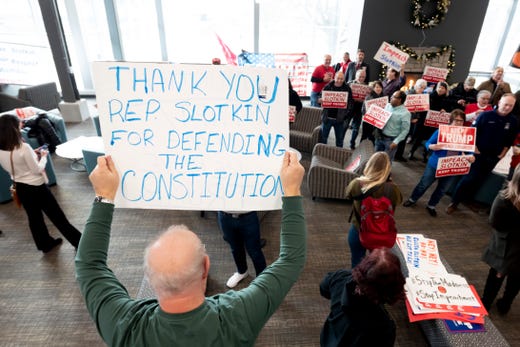 Supporters on both sides of the impeachment process chant before the start of a constituent community conversation held by U.S. Rep. Elissa Slotkin at the Oakland Center, at Oakland University. David Guralnick, The Detroit News
Fullscreen 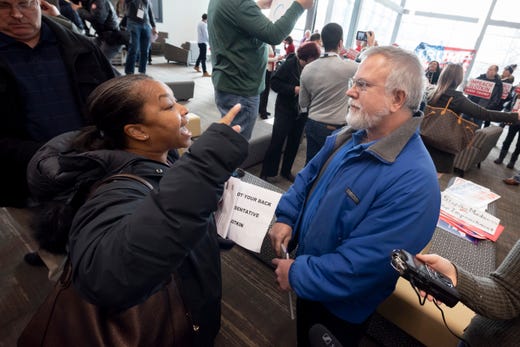 Michelle Bryant, left, of Lake Orion, and Steve Dean, of East Lansing argue before the start of a constituent community conversation held by U.S. Rep. Elissa Slotkin at the Oakland Center, at Oakland University. David Guralnick, The Detroit News
Fullscreen 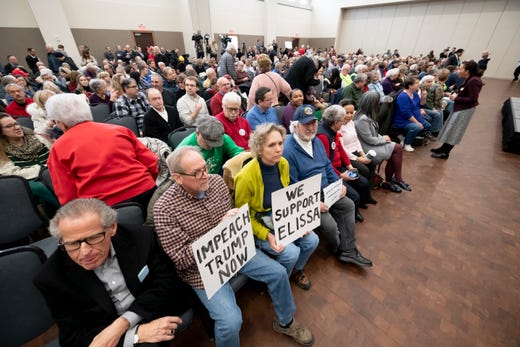 Hundreds of people take their seats before the start of a constituent community conversation held by U.S. Rep. Elissa Slotkin at the Oakland Center, at Oakland University. David Guralnick, The Detroit News
Fullscreen 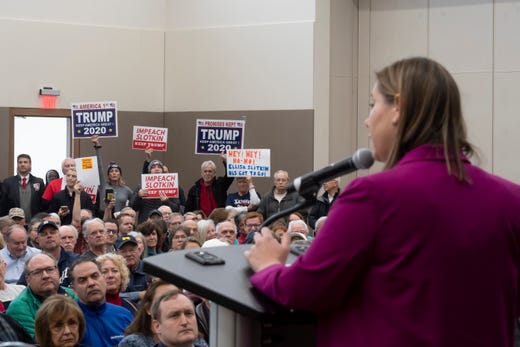 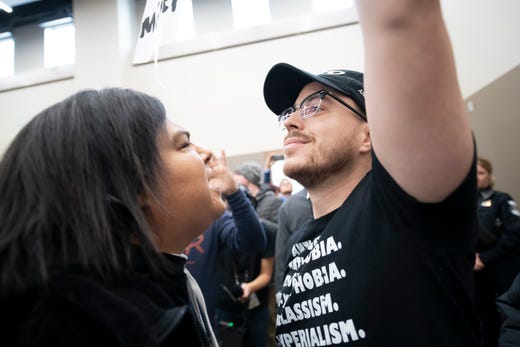 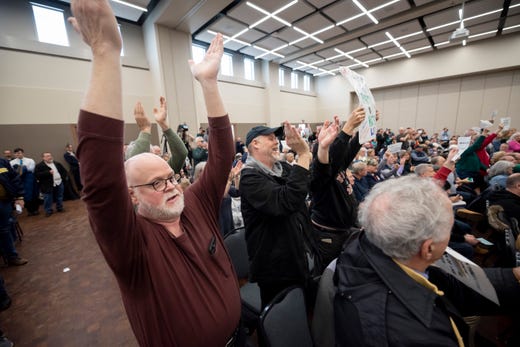 Supporters applaud and hold signs for U.S. Rep. Elissa Slotkin as she held a constituent community conversation, at the Oakland Center, at Oakland University. David Guralnick, The Detroit News
Fullscreen 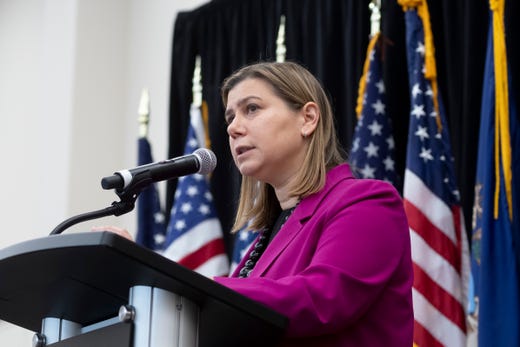 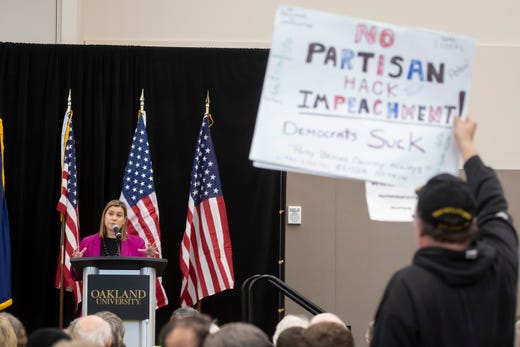 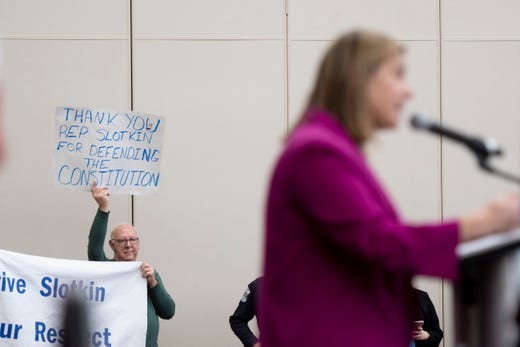 A supporter holds a sign for U.S. Rep. Elissa Slotkin as she held a constituent community conversation, at the Oakland Center, at Oakland University. David Guralnick, The Detroit News
Fullscreen 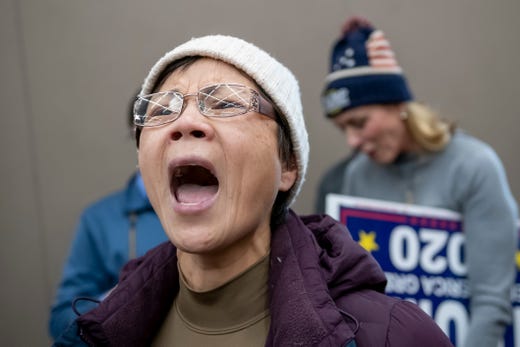 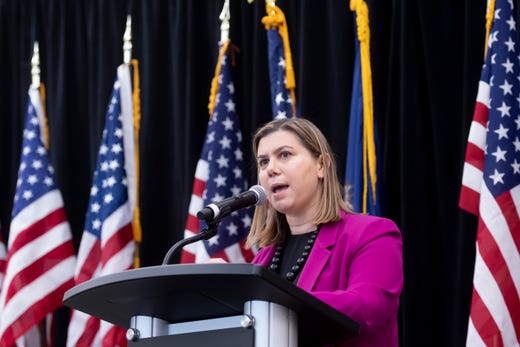 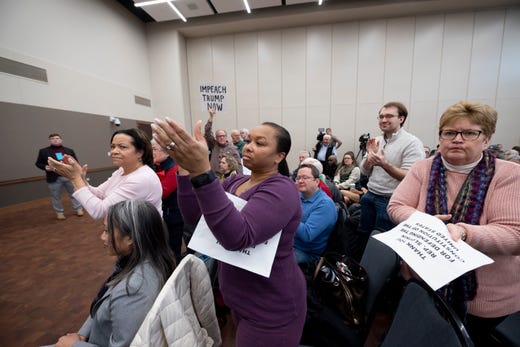 Audience members applaud for U.S. Rep. Elissa Slotkin as she speaks during a constituent community conversation, at the Oakland Center, at Oakland University. David Guralnick, The Detroit News
Fullscreen 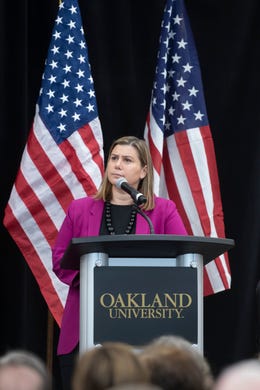 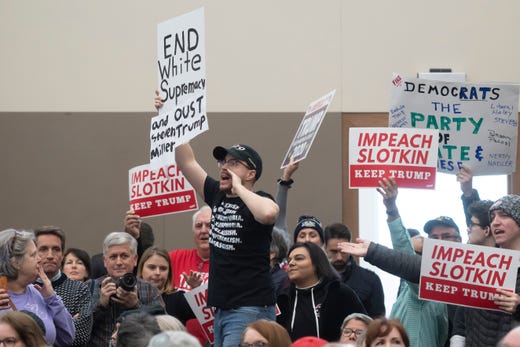 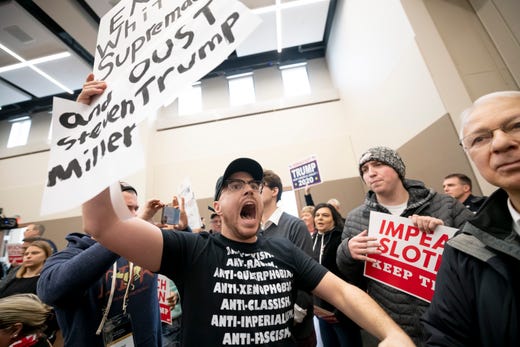 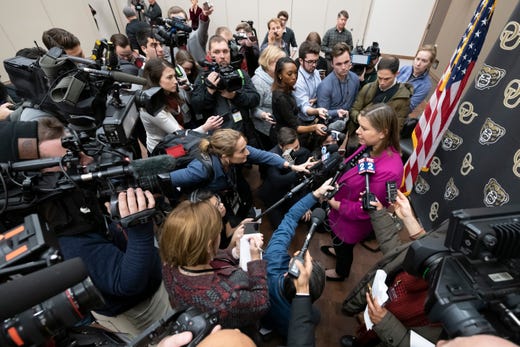 U.S. Rep. Elissa Slotkin speaks to the media after a constituent community conversation at the Oakland Center, at Oakland University. David Guralnick, The Detroit News
Fullscreen 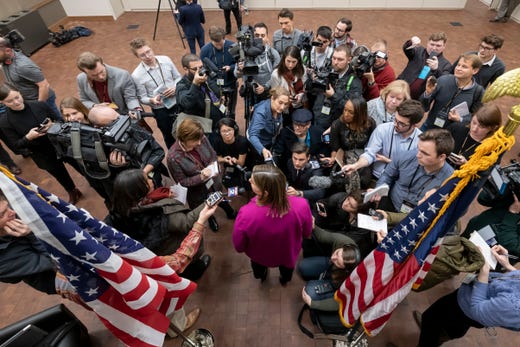 U.S. Rep. Elissa Slotkin speaks to the media after a constituent community conversation at the Oakland Center, at Oakland University. David Guralnick, The Detroit News
Fullscreen

The comments by the Holly Democrat were often drowned out by protesters, making it difficult for reporters and roughly 400 attendees to hear what she was saying. She opened her remarks — which were greeted with boos and applause — by saying she was glad to see such enthusiasm for civic engagement.

"We knew from the beginning that this was going to be a tough call, but you have to do what you're trained to do," Slotkin told reporters Monday. The decision, she said, couldn't be based on "polling or political calculus."

"That's what I did, and that's why I made the point of coming out today," she said.

Democratic Reps. Haley Stevens of Rochester Hills and Debbie Dingell of Dearborn remain undecided, although Dingell's critical remarks of Trump surrounding the impeachment inquiry prompted the president to attack her over the weekend.

Slotkin said she recognized that her decision to support impeachment was a risky one in the swing district. Of the thousands of phone calls, letters and emails her office received regarding the impeachment vote, a little more than half were against impeachment, she said.

She said she was not pressured by the House Democratic leadership to support the measure.

"I hope that even if people don't agree with my decision they see that I based my decision on my personal integrity," Slotkin said. "And that is the most I can do to show people that I hear them even if we don't agree."

The Republican National Committee and Trump supporters quickly criticized the decision. Slotkin’s constituents have demanded she stop the madness, but the congresswoman is ignoring them, said RNC spokeswoman Ellie Hockenbury.

“Elissa Slotkin is choosing Nancy Pelosi and the House Democrats’ unhinged caucus over her constituents. Voters won’t forget her cowardice," Hockenbury said in a statement.

In an opinion piece in the Detroit Free Press on Monday, Slotkin said she would vote yes on abuse of power and obstruction of Congress after examining “the full body of available information” related to Trump’s July phone call with Ukrainian President Volodymyr Zelenskiy.

In her op-ed, Slotkin said it isn’t unusual for officials to use the “powerful role” of the U.S. government to convince other nations “to do what’s in our interest.” But Trump instead “used the power of the presidency for his own benefit,” she wrote.

Before Slotkin's remarks, protesters on either side of the impeachment debate chanted and shouted, but the cacophony was nearly ceaseless during the event.

Slotkin often had to shout above the crowd to explain her decision, but she noted afterward there were some Trump supporters, wearing red MAGA hats and carrying signs, who listened and refrained from shouting.

"That's the best I can ask for is engaged citizens who came, who don't agree, but were willing to give me the chance to explain myself," she said.

During her remarks, Slotkin also outlined her work aimed at lowering prescription drug prices, the upcoming vote on the United States-Mexico-Canada Agreement, her opposition to Medicare for All legislation and the inclusion of PFAS chemical contaminant provisions in the Pentagon's budget.

But the majority of the hour-long meeting delved into Slotkin's politically fraught impeachment decision and the furor of support and opposition it elicited.

Slotkin decided to support impeachment instead of waiting for the 2020 elections because she said she believed the president was "seeking to influence that very election that I was counting on to have a democratic process in.”

Compared with past presidents' negotiations with foreign countries, Trump's discussion with the Ukrainian officials was centered around "his own political gain and not for the national security interests of the United States,” Slotkin said as protesters chanted "four more years."

"Whether you agree with me or not, I have attempted in all that I've done to be transparent, to be communicative, to let you know what I was doing," she said. "And for me this was an issue of principle.”

Trump's removal should be left in the hands of 2020 voters, not partisan politicians, said Alan Pittel of Hartland.

"My hope is that the constituents in District 8, from Ingham to Lansing to northern Oakland see how unfair this is, and that Elissa Slotkin is supporting impeachment and that we vote her out next November," Pittel said.

Slotkin didn’t rush to judgment but took a moderate position on the impeachment question as the process moved along, said Tom Moran of Tyrone Township. Because of that approach, Moran said he trusts the congresswoman’s judgment.

The impeachment inquiry lacked due process and ignored the will of the voters who put Trump in office, said Srijit Sengupta, a Troy resident who will vote in his first election in 2020. The India native became a U.S. citizen in December 2018.

“The common citizens of this country, they have nothing going for them, other than whatever the president does,” he added.

Slotkin was greeted by packed meetings with constituents in early October that featured boos and applause after she backed the impeachment inquiry into Trump.