Suspect to be charged in 'one-man crime wave' in Pontiac

“I’ve never seen one person cause this much damage with so many victims in such a short time,” said Oakland County Undersheriff Michael McCabe

Suspect to be charged in 'one-man crime wave' in Pontiac

Mark Jerome Hoover was arrested Friday about 7:30 p.m. following at least 10 10 incidents in a 90-minute span, according to the Oakland County Sheriff’s Office The Detroit News

Pontiac — A 25-year-old Pontiac man was expected to be formally charged Tuesday with multiple offenses stemming from a crime spree, including attempted armed robberies, carjackings, and assaults throughout Pontiac last Friday

Mark Jerome Hoover was arrested Friday about 7:30 p.m. following at least 10 incidents in a 90-minute span, according to the Oakland County Sheriff’s Office.

“In my career I’ve never seen one person cause this much damage with so many victims in such a short time,” said Oakland County Undersheriff Michael McCabe, a 43-year veteran. “He was a one-man crime wave.

“It was like a Quentin Tarantino movie — only live.” 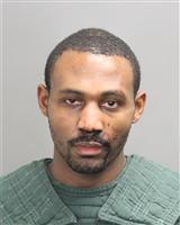 It all started with an attempted purse-snatching of a neighbor in the 300 block of Ferry Street, where police allege Hoover demanded the victim's car keys. He ran off empty-handed to his own address and, when deputies responded, escaped out a back window, according to investigators.

In the 400 block of S. Jessie, Hoover allegedly approached some kids sitting in a car parked in a driveway, pointed a handgun at them and demanded the car’s keys. He was unsuccessful and ran off again, deputies said.

At the intersection of Osmun and Sanford, Hoover allegedly approached a woman  sitting in her car on the street, pointed the handgun at her and demanded she stop the car. Instead she accelerated and struck Hoover, who ran off again, deputies said.

In the 200 block of Willard, Hoover allegedly approached a female who was sitting in her car in a driveway, opened the driver's side door and pointed a handgun at her, demanding that she get out. Instead, she kicked him, yelled and honked her horn, causing him to run away.

In the 200 block of Whittemore Street, Hoover allegedly approached a female victim and her granddaughter as they puled into a driveway, demanding her keys and purse at gunpoint. Hoover grabbed the purse and entered the car but could not start the vehicle, deputies said, so he threw the purse away and ran off. 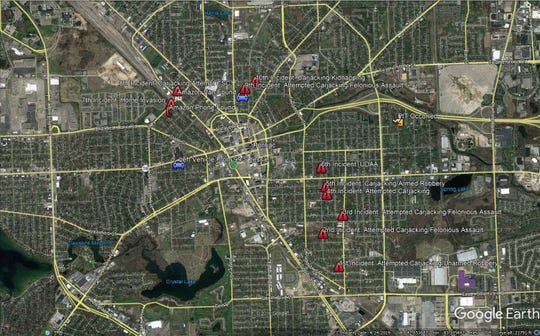 This map shows 10 incidents that occurred within 90 minutes in Pontiac on Friday, Dec. 20. Investigators believe the same man committed all of the incidents. (Photo: Oakland County Sheriff's Office)

In the 90 block of S. Jessie, a vehicle was unoccupied but its engine was running in a driveway. Hoover allegedly drove off with the vehicle, abandoning it on the side of the road a short distance away.

In the 200 block of Norton Avenue, Hoover allegedly forced his way into a residence with the handgun and threatened to kill the homeowner. The pair struggled and Hoover left the address after taking the homeowner’s cellphone.

On Cass Avenue, Hoover approached an Amazon delivery truck, forced his way inside at gunpoint and told the female driver he was going to rape her, according to investigators. The woman opened the passenger door and tried to jump out but her foot became lodged in the door and he dragged her for about 20 yards before crashing the truck in the 100 block of Gladstone.

In the 40 block of Matthews Street, Hoover allegedly approached another vehicle, occupied by two adults and four children under the age of 7. Hoover pointed the gun at the driver and ordered everyone out of the vehicle, hitting the driver over the head with the weapon. The driver was somehow able to drive off, deputies said.

At that location, Hoover allegedly approached a car occupied by two men and demanded that one of them drive off with him in the car. Deputies pursued the vehicle and used their cruiser to stop the car, only to have Hoover run for it, police said. This, time deputies chased him down and arrested him, according to the sheriff's office.