Candice Miller: 'Dilution not a solution' to I-696 ooze

Miller urged officials "to ensure the safety of the surrounding community, and to ensure that this material does not enter the lake"

Candice Miller: 'Dilution not a solution' to I-696 ooze

Madison Heights — For the second time in three days, former Congresswoman Candice Miller, now Public Works Commissioner for Macomb County, has issued a statement on the "green ooze" on Interstate 696 in Madison Heights.

Miller's statement Sunday urged officials with the U.S. Environmental Protection Agency (EPA) and Michigan's department of Environment, Great Lakes and Energy (EGLE) "to ensure that this clean up is done right, to ensure the safety of the surrounding community, and to ensure that this material does not enter the lake," calling a previous, months-long clean up effort "superficial."

Read More: Inside the shuttered factory where I-696 ooze allegedly originated

Sunday's rainfall, which was expected to last throughout the day, ultimately dropping up to two inches by noon Monday, prompted Sunday's statement.

Michigan EGLE reported Sunday, via Twitter, that EPA contractors were at the site on the freeway, "actively watching the two sump pumps siphoning contaminated groundwater, to ensure they keep up with the rain." 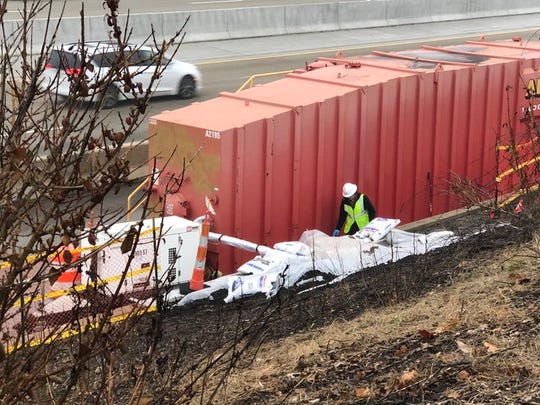 An EPA contractor checks on the sump pump siphoning water from the embankment where contaminated liquid from a shuttered plating facility seeped onto the I-696 shoulder earlier this month. (Photo: Michigan EGLE)

On Friday, tests by the EPA of water in storm sewers near the former Electro-Plating Services on E. 10 Mile, just south of the freeway, facility showed levels of hexavalent chromium, a cancer-causing substance, at 0.14 milligrams per liter, above the 0.10 mg/l standard for drinking water, according to the Michigan Department of Environment, Great Lakes and Energy.

The storm sewer on I-696 eventually enters Lake St. Clair miles away, where, EGLE said in a news release Friday, concentrations would be well below detectable levels "although still a significant concern for incremental accumulation in the ecosystem."

The ooze was spotted seeping from a freeway wall on Dec. 20. That night, an EGLE spokeswoman told The Detroit News "there is no public danger."

Read More: Crews cleaning up yellow-green chemical that ran onto I-696

Miller took issue with that, saying not enough was known about the timeline of the leakage, or how far the ooze has traveled, to be sure.

"The reality is, we don’t know how long these chemicals are leaking and so we don’t know where they may have traveled," Miller said in Sunday's statement. "But we know it has to stop now. EGLE and EPA have to step up to protect our communities and our lake.”

In November 2019, EPS the company was ordered to pay roughly $1.5 million and owner Gary Sayers received one year in prison for illegally storing hazardous waste. Sayers is not yet in federal custody, per the U.S. Bureau of Prisons.

Hazmat personnel were spotted at the EPS building Friday.

The money was to be restitution for the cash EPA's Superfund program spent cleaning up and disposing of the hazardous waste, according to a statement from the U.S. Department of Justice, issued in Nov. 2019 when Sayers was sentenced.

According to the feds, "starting in 1996 (the state) repeatedly sent (Sayers) warnings about his illegal handling of hazardous waste," and in 2005 he pleaded guilty in state court to illegally transporting hazardous waste.

But the problems persisted for another decade, culminating in Madison Heights revoking its occupancy permit and the state ordering the cease-and-desist in Dec. 2016. The EPA's cleanup started in 2017 and ended in Jan. 2018.

"It is clear from the current situation that either the federal EPA or the state EGLE did not adequately follow through with the initial clean up," Miller said in the statement.

In its statement Friday, EGLE said that full data from the tests released Friday would be complete this week, after a "quality control review" was performed. The EPA "will begin dozens of soil borings" late in the week, the statement said, "to help determine the extent and levels of contamination."

Madison Heights is an Oakland County city, outside of Miller's jurisdiction, but Miller said in her Friday statement that the issue crossed geographical boundaries.

"While this site is not in Macomb County, this site clearly demands an immediate response from all appropriate authorities until it is no longer a danger to our community and to our magnificent Great Lakes," the statement read.

Oakland County Executive David Coulter also called for additional testing and other action to address contamination at the site.

"I am working closely with other elected representatives to ensure city leaders in Madison Heights are getting what they need from state and federal agencies, including comprehensive soil testing to determine the scope and size of the contamination and a long-term plan for full remediation," Coulter said. "We are all committed to protecting the health and safety of our residents."

]"Dilution is not a solution and that is not the correct response," Miller said Sunday.