Southfield — The Consulate General of the Republic of Iraq is accepting condolences for those killed in Iraq as a result of recent American raids, officials announced Monday.

The consulate, based in Southfield, said it will be opening a record of "condolences for the lives of the righteous martyrs who were killed" for community members to contribute to on Tuesday and Wednesday.

The record will be open from 2 - 5 p.m. in the consulate building, located at 16445 W. 12 Mile, according to an online statement. The consulate declined to further comment.

In Tehran on Monday, the targeted killing of the Iranian Revolutionary Guard Gen. Qassem Soleimani drew a crowd, said by police to be in the millions. Soleimani’s replacement vowed to take revenge.

Additionally, Tehran has abandoned the remaining limits of its 2015 nuclear deal with world powers in response to the slaying; in Iraq, the parliament has called for the expulsion of all American troops from Iraqi soil.

On Monday, Iran’s supreme leader Ayatollah Ali Khamenei prayed over the caskets of Soleimani and others killed in a U.S. airstrike in Baghdad, an attack that has raised tensions between Tehran and Washington. 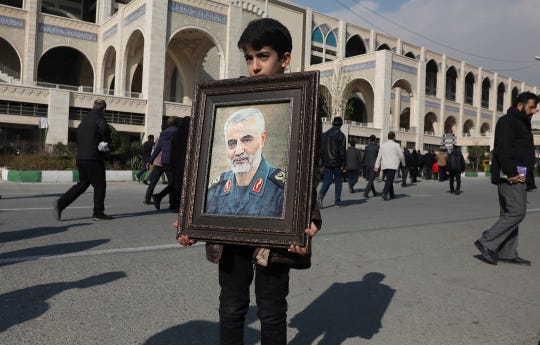 A boy carries a portrait of Iranian Revolutionary Guard Gen. Qassem Soleimani, who was killed in the U.S. airstrike in Iraq, prior to the Friday prayers in Tehran, Iran, Friday Jan. 3, 2020. (Photo: Vahid Salemi, AP)

Adding to the tensions, President Donald Trump threatened to demand billions of dollars in compensation from Iraq or impose "sanctions like they’ve never seen before" if it goes through with expelling U.S. troops.

Soleimani’s daughter, Zeinab, directly threatened an attack on the U.S. military in the Mideast while speaking to a crowd that stretched as far as the eye could see down major thoroughfares in Iran’s capital.