The state of Michigan has spent at least $200,000 to contain green ooze leaking along I-696 in Madison Heights since it was discovered Dec. 20

Lansing — Michigan's environmental director told lawmakers Wednesday she is "disappointed" in what happened at a Madison Height site, where green ooze began leaking along I-696 and has cost the state so far at least $200,000 over 24 days to contain.

The price tag is expected to increase as the state looks at ways to stop the environmental damage at the Electro-Plating Services location, a closed Madison Heights business that’s been under the scrutiny of state and federal officials for more than two decades because of improper storage of hazardous waste.

The presence of per- and poly-fluoroalkyl substances in the ground water could triple the cost of removing contaminated water and soil from the site, said Tracy Kecskemeti, Southeast Michigan district coordinator for the Michigan Department of Environment, Great Lakes and Energy.

“It’s not in the hundreds of thousands,” she said. “It’s in the millions.”

Agency experts and local governments involved in the fallout from the contaminated Madison Heights site testified Wednesday for nearly two hours before the House Appropriations Committee.

The hearing was held to examine the agency's response to the ooze that was discovered Dec. 20 and potential ways to improve communication and response at all levels of government, said Rep. Shane Hernandez, the Port Huron Republican who chairs House Appropriations. 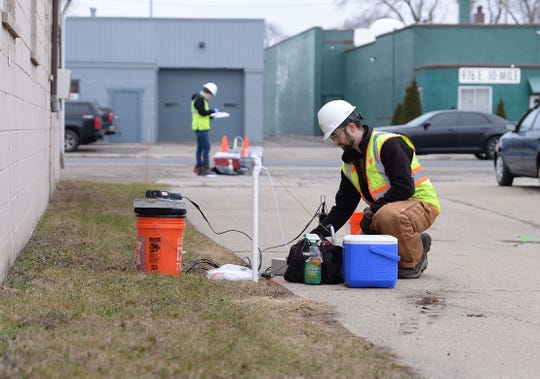 Marc Messina of Mannik Smith Group, collects water samples outside the facility where green ooze was recently detected seeping out and onto the shoulder of I-696 in Madison Heights, Michigan. (Photo: Clarence Tabb Jr., The Detroit News)

In March 2019, the state submitted a site evaluation to the U.S. Environmental Protection Agency noting significant contamination at the business, but also opining that there was no risk to drinking water and little risk of the contaminants migrating offsite. Based on the state's assessment, the EPA declined to designate the Madison Heights location as a Superfund site, which would have prioritized it for cleanup.

EGLE Director Leisl Clark told lawmakers she was “disappointed” in what transpired in Madison Heights and EGLE is reviewing its processes and decisions regarding owner Gary Sayers and his properties in Madison Heights, Detroit, and Marion Township.

The report to the EPA in 2019, Clark told lawmakers, reflects the agency’s effort to prioritize thousands of contaminated sites for cleanup across Michigan. She said no amount of money could eliminate the risk from every site, but more funding would be useful to build out a better information technology system to more easily track the locations.

“It’s a hell of a lot of sites,” Clark said. “We prioritize those, and we pay closest attention to those that pose the greatest risk to human health.”

The environmental director promised a change in the department's culture.

“When it comes to dealing with problem facilities that aren’t acting in good faith, the message has been for too long to pull punches,” said Clark, who noted her commitment to instilling consistency and accountability in the agency.

“I’m not blind to the fact that I’m leading an agency that suffers from a lack of trust and still operates in the shadows of the Flint water crisis,” she said.

Sayers had been routinely cited by the state for nearly two decades before environmental officials issued a cease and desist letter shutting down the business in 2016.

In 2017, the EPA spent nearly $1.5 million cleaning up the site to ensure immediate risks to public health were mitigated and in 2018 left jurisdiction of the site with the state.

Since surrounding Oakland County residents use water from the Great Lakes Water Authority and not ground water, the agency was able to eliminate the possibility of the contaminated water entering drinking water in 2019, Kecskemeti said.

Federal and state officials are digging holes around the facility to determine how far and in which direction the contaminants have spread. Officials hope to hold a town hall with residents in early February.

EGLE and EPA personnel have been removing contaminated ground water from the site and are digging a containment area on site to better trap the water, Kecskemeti said. But contaminated water removal would have to continue perpetually until or unless the contaminated soil through which the water is traveling below the business is removed.

The interstate freeway effectively acted as a containment area as ground water moved through the contaminated soil and dumping pit inside Electro-Plating Services before gravity pulled it down toward the interstate, Kecskemeti said.

Without the emergence of the green substance along I-696, it is not clear when the state would have realized that the contaminants had in fact migrated offsite.

The state is evaluating any means at its disposal to hold Sayers accountable for the pollution and cleanup in Madison Heights, but history indicates it’s a difficult task, said Kecskemeti.

Sayers, who is serving time in prison based on improper storage of waste, was ordered to pay the EPA $1.5 million for its 2017 cleanup, but has yet to pay, Kecskemeti said.

“The reality in many of these cases is that a guy like this, a facility like this, will file bankruptcy, his other properties will be shielded,” she said. “…and a lot of times the public pays for those cleanups unfortunately.”

Officials in both Madison Heights and Sanilac County expressed concern regarding the lack of notification from the state about past citations and inspections at local sites.

“When you have somebody who is a constant repeater or a reoccurring situation or they have multiple violations, reach out to us. We have boots on the ground,” said Madison Heights City Manager Melissa Marsh. “…We know more about what’s going on in our community than people at the state do.”

In Sanilac County, federal and state officials found no visible evidence of contamination at Sayers' Marion Township residence during a visit earlier this month but are conducting additional testing.

Local officials said residents have reported hearing excavators at the home at 2 a.m., prompting fears that Sayers may have buried waste.

Sanilac County Emergency Manager Todd Hillman expressed frustration that he wasn’t alerted to a 2017 site visit at the Marion Township property or provided a copy of the report since asking for it earlier this month.

Without it and other information from the state, Hillman said, he’s unable to definitively answer questions from residents about the safety of their water.

“Yeah, there’s not a lot of people; it’s not nearly as densely populated,” he said. “But all of these people around there still have grandkids that play in the streams, and they still drink the water and, remember, we’re drinking off the wells here.”

Communications with locals have been improving, and concerns in rural Michigan won't be ignored, said Clark, a native of neighboring Huron County.

"We are very concerned about folks being on well water," Clark said. "That being said, again, this was a private residence up in that area so it makes the dynamics of it a little different."