The Michigan Department of Environment, Great Lakes and Energy said the testing was done this month after ooze leaked from a Madison Heights site

Recent testing near the Madison Heights site where green ooze started leaking along Interstate 696 last month has found the presence of PFAS in sewers and a creek, state officials announced Friday.

The Michigan Department of Environment, Great Lakes and Energy said the testing was conducted this month in nearby storm sewers and at Bear Creek, which representatives said is not directly connected to the shuttered Electro-Plating Services and two other buildings off E. 10 Mile now under state and federal scrutiny. The creek flows into the Clinton River and eventually to Lake St. Clair.

The department analysis showed detectable levels of per- and polyfluoroalkyl substances, according to a statement. PFOS — one of the compounds — was detected in Bear Creek at 17.9 parts per trillion, exceeding surface water criteria of 12 ppt. 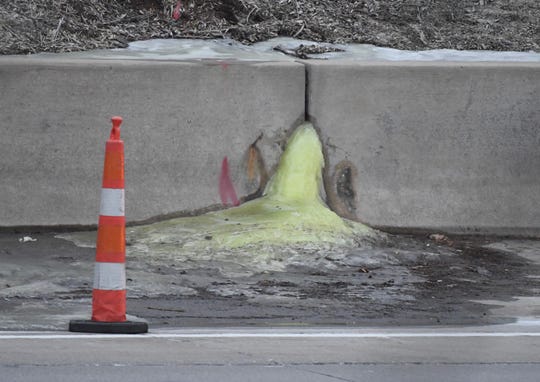 A green liquid seeps out of wall along the shoulder of the east bound lanes of I-696 just west of Couzens Ave. in Madison Heights Friday afternoon. (Photo: Daniel Mears, The Detroit News)

PFAS substances are popularly used to create nonstick surfaces for products such as firefighting foam, Scotchgard, Teflon and food wrappers. PFAS has been linked to health risks such as thyroid disease, increased cholesterol levels, and kidney and testicular cancers.

The department said it plans to work with the Environmental Protection Agency to create a sampling plan to continue monitoring contaminants in storm sewers and Bear Creek.

"Now that we saw we got a positive test, we’re going to do additional samples," Jill Greenberg, a spokeswoman for EGLE, said Friday. "We’re testing in stages and we’re going to definitely expand that so we can just determine the extent of where that might be present."

In other updates announced Friday, the EPA has launched an interactive map that displays preliminary test results for hexavalent chromium, cyanide and trichloroethylene, while Madison Heights has sent a camera through the affected sewer lines to help better identify locations where contaminated groundwater might be entering the system, EGLE said.

"EPA officials report they have an engineering team starting to evaluate soil and groundwater testing data in order to work on a longer-term solution addressing site contaminants," the department said. "That plan will likely take six to eight weeks to develop."

On Dec. 20, motorists spotted ooze seeping from a wall on eastbound I-696; the former Electro-Plating Services, shuttered by the state in December 2016, is right above the site of the ooze.

Federal and state officials have been digging holes around the facility to determine how far and in which direction the contaminants have spread.

"It’s a significant environmental situation and we want residents to have their hands on all information that they can so they can understand the impact and everyone's role in its cleanup," Greenberg said Friday.

Gary Sayers is serving a one-year federal prison sentence after pleading guilty to illegal handling of hazardous waste at Electro-Plating Services and other properties. He has been ordered to repay a $1.5 million cleanup done by EPA in 2017.