Farmington Hills — Two former employees of a popular Michigan restaurant chain said Thursday they were among several managers — all members of racial or religious minorities — terminated last year without warning or explanation.

Alicia Dunlap, who is Hispanic, and Aliou Diao, who is a Senegalese Muslim, sued Anna's House in federal court Thursday, alleging they were discharged because their ethnicity and religion did not make them a “good fit for the culture that the owner of Anna’s House was trying to create,” said Dawud Walid, executive director of the Council on American-Islamic Relations-Michigan, who appeared with them at a news conference at the group's office. 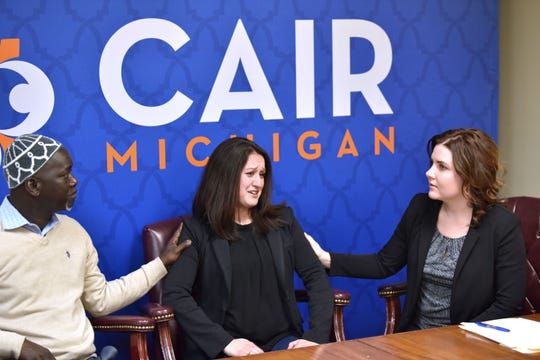 Plaintiff Alicia Dunlap, center, who is Christian and Latina, is comforted by attorney Channing Robinson, right, and co-plaintiff Aliou Diao, left, who is Muslim and an immigrant from West Africa, after they announce their federal lawsuit. (Photo: Todd McInturf, The Detroit News)

Both Dunlap and Diao said they had received positive performance reviews and feedback from management at Anna’s House, which is owned by Josh Beckett.

“Anna’s House is aware of the lawsuit filed today," Beckett said in a statement Thursday. "We have retained counsel and will defend against these claims in Court. Anna’s House has and continues to be a place that employs and serves people of all backgrounds and beliefs.”

Dunlap, a mother of two, was hired on in July 2017 and became general manager at the Westland location. She teared up during the press conference, saying she was told to tell two female African-American employees to remove red dye from their hair because the dye violated company policy. 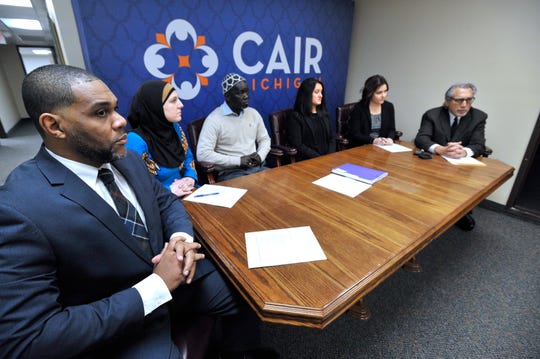 Dunlap said she refused. After that incident and two others — one involving an African-American employee who was overweight and another who wore a head covering — Dunlap claims she was terminated.

Dunlap said Beckett called her on April 22, 2019, and asked if an employee working the front counter wore a “jihad” — actually a hijab. Dunlap said she refused to comply with Beckett’s directive that the worker remove the head covering.

Diao was hired in December 2017 as a kitchen manager. On or about June 2019 a co-worker of Dunlap’s was questioned on whether Diao, a Muslim, prayed at work.

According to the complaint, Diao is required by his faith to pray five times a day, including times while he is at work.

As an accommodation for Diao, a sign was placed on the office door by the management staff “instructing employees to seek assistance from a manager should the employee observe Mr. Diao praying in the office,” according to the lawsuit. The office door had a lock on it and Diao had a prayer rug inside that allowed him to pray.

According to the lawsuit, Beckett did not inquire about whether other employees prayed at work and on June 11, 2019, told a co-worker that he was thinking of “purging Westland.”

Beckett, who has been in the restaurant business since 2005, has made statements and social media postings that reveal “racial, xenophobic and Islamophobic biases which are at the heart of these unlawful employment practices” according to a CAIR news release and the lawsuit .

“Beckett operates restaurants as if it was 1950,” said attorney Michael Pitt, who represents Dunlap. “He wants his employees to be happy white Americans and has equated the restaurant’s culture to Disneyland. He went as far as to naming one of his managers ‘Director of Magic.’” 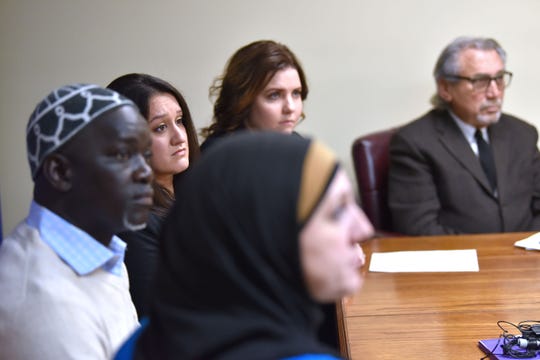 “I’ve worked discrimination complaints for decades and have never seen anything as disturbing as this today,” Pitt said.

The lawsuit, which has been assigned to U.S. District Judge Linda Parker, alleges civil rights violations and employment decisions based on race, ethnicity and national origin or religion.

The lawsuit alleges Dunlap and Diao have both suffered mental anguish, humiliation, physical injury, embarrassment and emotional distress from the discriminatory conduct. It seeks to have Dunlap and Diao reinstated to their former or comparable positions

It also seeks an order enjoining Beckett or Anna’s House from further retaliation; and the awarding of damages to be determined, costs and attorney fees.