Rochester Hills — A car crashed into a sandwich shop about 11:15 a.m. Thursday. Or rather, it was bumped in.

“I was cooking sandwiches and turned around to a car crashing through the window,” said Nolan Bianchi, an employee at Chadd's Bistro.

“The second car stopped the first one,” Bianchi said via text message. “If it hadn’t been there, she probably would have driven straight through.”

Bianchi, 23, has worked at the eatery for five years and does freelance work for The Detroit News sports department. 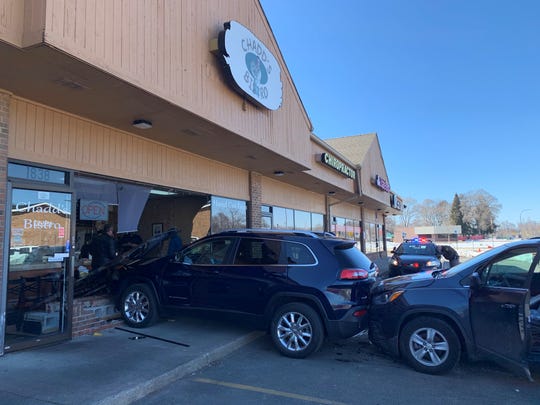 An SUV was pushed into Chadd's Bistro in Rochester Hills on Thursday, Feb. 20, 2020. (Photo: Nolan Bianchi)

Lisa Fredericks was surprised twice — once by the crash and again to see it was her vehicle crashing through the window. She said she turned to look when she heard a huge noise.

“Well, the car, my car, was inside the restaurant with the window on top of it,”  Fredericks, 59, told Bianchi.

It took about a minute for her to figure out what happened.

“I was in shock, trying to figure out why was my car moving because it was in park when I left it,” Fredericks said.

Jacob Koons of Southfield also told Bianchi that the crash surprised him.

“I didn’t see them plow through, but heard a loud crash,” Koons, 23, said. “I was sitting at the bar stools and turned around and there’s a car just barreling through. 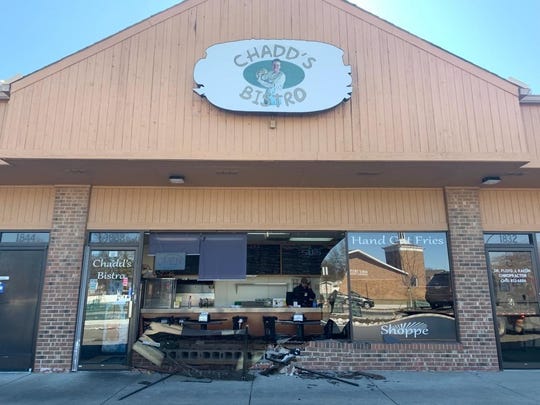 Chadd's Bistro in Rochester Hills after vehicles involved in a chain reaction crash are towed away. (Photo: Nolan Bianchi)

“Luckily it stopped before it actually hit up to the bar.”

Witnesses also said the driver apparently ran over trees in in the median that the city installed last summer. The speed limit along that stretch of  Auburn Road is 25 miles per hour.

Fredericks and Koons were the only customers inside at the time, and police arrived about 10 minutes after the crash, Bianchi said. Nobody appeared injured or left in an ambulance.

Chadd’s Bistro is at 1838 E. Auburn Road in Rochester Hills.