Davonte Burkett remains at large after incident that left one man dead, another wounded

Authorities announced a $1,000 reward for tips to find a suspect in a shooting last week in Pontiac that left one man dead and another injured.

The survivor told investigators he had driven with another Pontiac resident to Osmun and Russell early March 23 to meet two men, but when they arrived, "two subjects approached the vehicle, opened the back doors and began shooting inside," Oakland County Sheriff's officials said in a statement.

The 22-year-old driver, who was wounded in the back, sped off as gunshots continued and noticed his passenger had been struck, according to the release.

He drove to St. Joseph Mercy Oakland Hospital, where the passenger, identified as Marquis Myles, 23, was pronounced dead.

Through leads, detectives identified two suspects: Davonte Burkett and Delorean Jones, who are on parole from the Michigan Department of Corrections, authorities reported.

He was arraigned Thursday at Pontiac's 50th District Court on charges including open murder and possessing a firearm while committing a felony, county officials said.

Judge Cynthia Walker denied bond. His next court date is scheduled for April 9.

Burkett remains at large. He is described as 6-foot-2, 180 pounds with brown hair and brown eyes. 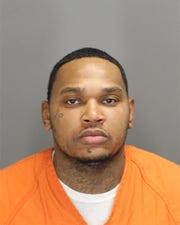 The 28-year-old previously has been charged with three counts of carrying a concealed weapon, discharging a firearm into a building and assault with intent to do great bodily harm less than murder, county officials said.

Anyone who knows his whereabouts can anonymously reach Crime Stoppers of Michigan at 1-800-SPEAK-UP.