Lawsuit alleges Whitmer's 'abusive' order is 'taking' with no compensation

Lawsuit alleges Whitmer's 'abusive' order is 'taking' with no compensation

Four Michigan residents — three from Oakland County and one from Roscommon County — have filed a federal lawsuit against Michigan Gov. Gretchen Whitmer over the impact of her executive orders on business, the use of privately owned property as well as the ability to associate with family and friends.

The lawsuit filed Tuesday in United States Eastern District Court doesn’t question the “legitimate public purpose” of the order or Whitmer’s authority to issue it, but challenges the provisions that it argues conflict with the state and federal constitutions.

The lawsuit contends provisions of Whitmer’s stay-home order are “arbitrary, capricious, irrational and abusive.” The provisions violate the First Amendment right to freedom of association and the takings clause of the Fifth Amendment, which entitles individuals to compensation when their property rights are taken, according to the lawsuit filed by lawyer David Helm. 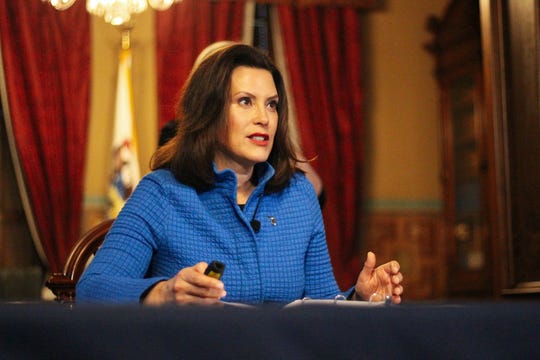 “Never in the modern history of the United States — even in war time — has such an invasive action stripping citizens of fundamental rights been taken by a government order,” the lawsuit said.

The suit seeks a temporary restraining order and permanent injunction on the executive order and an acknowledgement by the judge that the order violates constitutional rights. The suit also seeks money, including attorney fees and costs and compensatory and punitive damages.

“Under threat of fines and criminal penalties the individual plaintiffs are prohibited from traveling freely within the state of Michigan, visiting family and friends, attending to or utilizing their privately owned property, and visiting their significant others,” the lawsuit said.

Under the order, Roscommon County resident Jerry Frost is unable to visit his girlfriend of 14 years because they don’t reside in the same household, the lawsuit said. The restrictions constitute a violation of Frost’s right to associate, according to the suit.

The order also closed Contender’s Tree and Lawn Specialists Inc. in Oakland County, owned by Steve Martinko, in the middle of spring chemical application after the business purchased “hundreds of thousands of dollars” of supplies for the work, according to the lawsuit. The company laid off 15 workers on the day the executive order took effect.

All while the Oakland County company was able to “safely operate while still observing social distancing have been ordered to close,” the lawsuit said.

The order from the governor essentially is a “regulatory taking” without state compensation “for those who suffered substantial — and perhaps total — diminution of value in their property interests as a result.”

The tree service and the Lackomars “have been called upon to sacrifice all usage of their Properties in the name of the common good, that is, to leave their properties economically and otherwise idle, and for this, they have suffered a taking,” the lawsuit said.

The Tuesday lawsuit is at least the second federal suit to arise from Whitmer's stay home order.

Earlier this month, a protester outside an abortion clinic in Detroit filed a lawsuit arguing consitutional violations after he was ticketed for violating the governor's stay-home order.

The governor later clarified that her stay-home order did not apply to protesters maintaining social distancing.

Western Michigan U.S. District Judge Janet Neff signed Tuesday a stipulated agreement in which the city of Detroit agreed to dismiss the citation and dismiss the lawsuit with prejudice.