A partnership with not-for-profit Advocate Aurora Health would create a multi-state health system with hospitals in Wisconsin, Illinois and Michigan — advancing the out-of-state system's stated goal of doubling its revenues and tripling its patients in the next five years.

Beaumont Health president and CEO John Fox said the proposed partnership would increase resources available to the eight-hospital Southfield-based system and strengthen its position within the health care industry.

"We’re facing extraordinary challenges from new players in the market that are much more disruptive," Fox said at the Wednesday press briefing, noting Amazon, Walmart, CVS and others.

"Even though Beaumont Health is big at (nearly) $5 billion (in annual revenues), it’s really not big enough to play with those kind of players," he said.

"And we think that the three of us, the three markets together in the upper Midwest, given our concentration being the leaders in our respective states, gives us some extraordinary opportunities to be more successful." 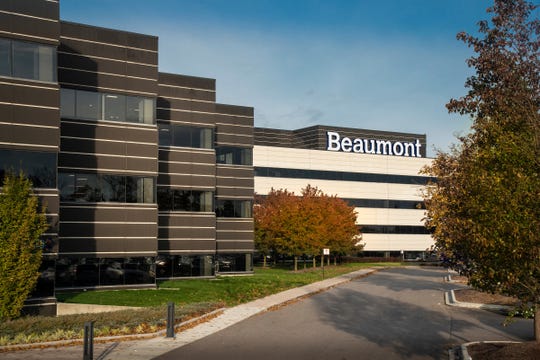 Beaumont Health is in partnership talks with Advocate Aurora Health, a 28-hospital system with facilities in Illinois and Wisconsin. (Photo: Beaumont Health)

The out-of-state health system known as Advocate Aurora was created with the 2018 merger of Advocate Health Care, Illinois' largest health system, and Aurora Health Care, with facilities in Wisconsin and Northern Illinois. The merger created one of the nation's 10 largest not-for-profit health systems with more than 70,000 employees, according to the press release.

“The potential opportunity to leverage the strength and scale of a regional organization while maintaining a local focus and strong presence in Michigan as a leader and major employer is important to us," Fox said in a Beaumont statement.

At the press briefing, Beaumont's chief executive said the proposed three-way partnership would be led by a 15-member board of directors including five members each from the Advocate, Aurora and Beaumont health systems.

Though each health system in the new partnership would get an equal number of votes on its board of directors, Minneapolis-based health care analyst Allan Baumgarten said the board likely will be strongly influenced by Advocate, the largest of the three health systems.

The Advocate Aurora system was initially led by two co-CEOs, who previously served as the chief executives of the legacy systems, Baumgarten said. Eventually  the former Aurora CEO retired, and the former Advocate CEO took sole leadership of the partnership, he said.

"It's pretty clear, if you talk to people in Wisconsin and Illinois, they will tell you it's really Advocate taking over," Baumgarten said.  "The CEO of Advocate is now the CEO of the combined system. So it wouldn't be surprising if they say that there will be a transitional period where we'll have co-CEOs, or something like that, but the important word there is 'transitional.'

"I think they thought that the co-CEO model, and this merger-of-equals kind of approach, really was not working that well," he added. "I think at a certain point Advocate asserted itself in saying, 'We need to move to the next stage here.' "

While the Advocate Aurora system is headquartered in both Downers Grove and Milwaukee, the proposed three-system operation could possibly be headquartered in a central location. Fox said he couldn't say where that might be.

Fox described the proposed deal as a "pooling of interests" under a common parent organization.

"There’s no money that changes hands, there’s no sale that takes place. There’s a common parent doing common government, a common board of directors," he said.

"That board, subject to the terms and conditions that we negotiate in our definitive agreements, will have governance control over the entire operation. But with each of those markets, Illinois, Wisconsin and Michigan, having one-third voter influence over that."

Beaumont Health has been flirting with plans to expand beyond Michigan after a 2015 mega merger with a couple of local health systems. In late May, the Southfield-based health system ended a planned partnership with Akron, Ohio-based Summa Health after signing an agreement in December that was approved by state and federal regulatory agencies.

Fox said Wednesday the decision not to complete the Summa partnership was made independently of the talks with Advocate Aurora.

At the time, Beaumont didn't provide a reason for its change of plans. But the novel coronavirus outbreak  resulted in the hospital system's "hemorrhaging" of cash because of canceled elective surgeries due to state restrictions, other revenue losses and increased costs for personal protection equipment.

Advocate Aurora Health and Beaumont Health began discussions at the end of 2019, but partnership talks paused to allow both organizations to focus on COVID-19, according to Beaumont.

Both systems would work closely with state and regulatory agencies, a process that began earlier this week with notices going to Attorney General Dana Nessel's office and the attorney generals of Illinois and Wisconsin, the health systems said.

Baumgarten was not surprised to hear of the talks between Beaumont and the Advocate Aurora Health system, which in January unveiled an ambitious goal of doubling its $12 billion annual revenue to $27 billion by 2025. The Illinois and Wisconsin health system also set a goal of more than tripling its current number of  patients, from 2.8 million now to 10 million patients within five years.

Asked about the timing of Wednesday's announcement, just as the economy is reopening in Michigan, the Minneapolis analyst said Beaumont was financially healthy prior to the COVID-19 crisis and indications are that it will return to its formerly strong financial position, provided there isn't another outbreak.

Most hospitals have returned to about 80% to 90% of their former volume of non-emergency surgeries, and have benefited from federal aid to offset COVID-19 losses, Baumgarten said.

"They took a significant blow in April and May with the increased expenses, and the reduced revenues and investment losses," he said. "But (with) the federal funding and the resumption of many of their core revenue generating activities, I think they're on track to get back to their normally strong financial position."

The pandemic has likely resulted in changes across the health care landscape that are likely to remain after the crisis, such as increased on reliance on telemedicine with fewer office visits and hospital stays, Baumgarten said. The changes will become more evident in the coming months, as Beaumont and Advocate Aurora negotiate the proposal, he said.

Completing a deal is far from assured, Baumgarten said, noting at least four major hospital mergers were announced, but subsequently canceled before closing.