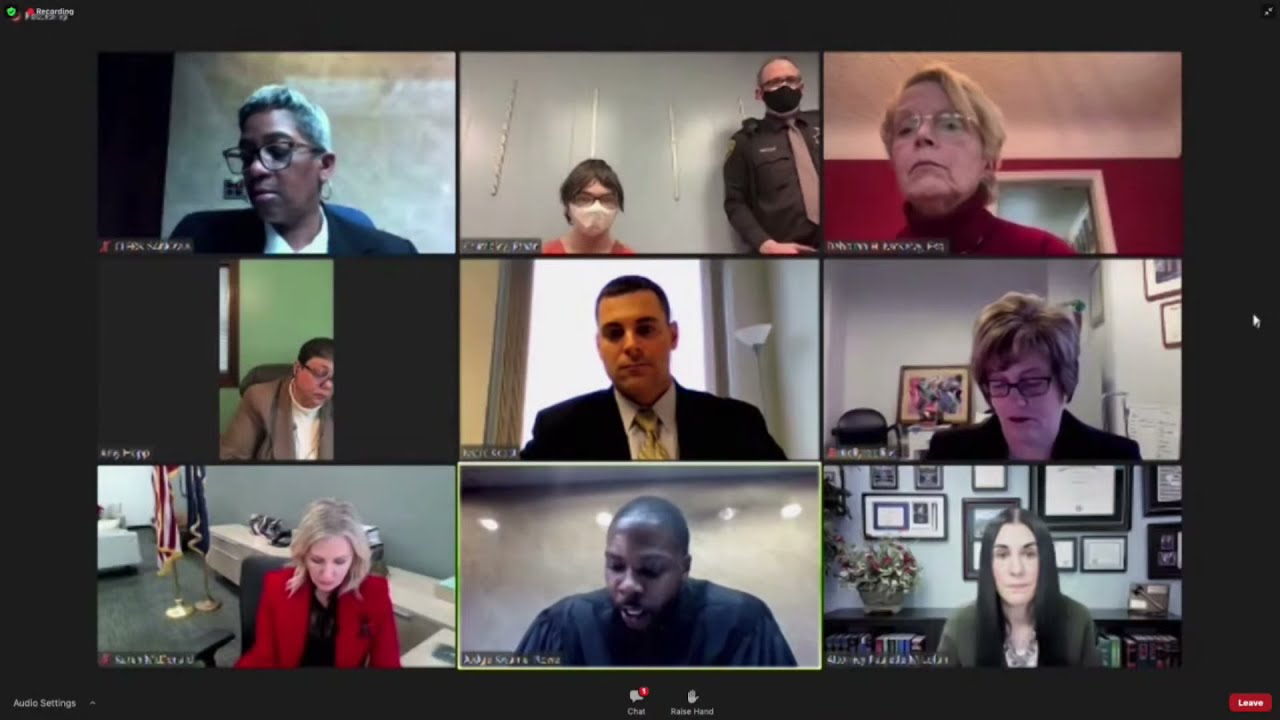 The teen's attorneys waived a formal reading of the charges, noting Crumbley would stand mute, and asked that the court enter a not guilty plea on Crumbley's behalf.

Oakland County Circuit Judge Kwame L. Rowe presided over the hearing. Rowe noted parties on both sides had agreed that Rowe's past position as an Oakland County assistant prosecutor did not create a conflict of interest.

Rowe was appointed to the bench in August by Gov. Gretchen Whitmer.

The judge moved to delay a required hearing date prior to Jan. 21, citing health risks associated with the ongoing COVID-19 pandemic. Rowe noted an in-person hearing is being requested by Crumbley's defense team and it's warranted, but the continued surge in cases of the virus won't make that possible.

"Because the number of COVID cases are so high at this time the court is finding good cause to extend those 30 days because we cannot effectuate an in-person hearing at this time due to the positivity rate," Rowe said.

The virtual appearance for Crumbley was the teen's second in less than a week. On Friday, Crumbley was bound over for trial after his attorneys waived his probable cause conference and preliminary examination in district court.

Crumbley is being held in Oakland County Jail without bond. He is charged as an adult with four counts of first-degree murder, one count of terrorism causing death, seven counts of assault with intent to murder and 12 counts of felony firearm.

Defense attorneys previously made a case to have Crumbley transferred from the county's adult jail to a juvenile facility in Pontiac.

His placement is expected to be discussed at an in-person hearing. A Jan. 19 scheduling conference is expected to aid attorneys in setting that hearing date.

Rowe noted only the prosecution and defense will take part in next week's status conference.

Deborah McKelvy, who was appointed by District 52-3 Judge Nancy Carniak to represent Crumbley's interests as guardian-ad-litem, will stay on in that role during trial, Rowe added.

Oakland County prosecutors shared disturbing allegations about the teen during a separate Friday bond hearing for his parents, James and Jennifer Crumbley.

At the parents' bond hearing, assistant Oakland County Prosecutor Marc Keast alleged that Ethan Crumbley made a videotape in August in which he allegedly said "It's time to shoot up a school."

Keast has argued the Crumbleys ignored signs that their son was deeply troubled and Keast alleged the teen was obsessed with violence and guns months before the shooting.

Ethan Crumbley allegedly told his mother via text message months before the shooting that he had seen "demons and ghosts" in their home, according to Keast. Ethan Crumbley, Keast noted, also had looked up school shootings and bomb-making online.

Attorneys Mariell Lehman and Shannon Smith, the defense team for the Crumbleys, asked 52-3 District Judge Julie Nicholson Friday to lower their bonds to $100,000 each, down from $500,000 each. Nicholson denied the request and maintained the original bond.

The judge, in her decision, cited the parents' ties to family in Florida, the seriousness of the alleged crimes and a "flight risk" noting their decision to allegedly run to  "an abandoned building" in Detroit while they were being sought by Oakland County authorities.

The couple both face four counts of involuntary manslaughter in the Nov. 30 shooting. They face up to 15 years in prison, if convicted.

Prosecutors allege the parents "drained" their son's bank account of $3,000 before they fled to Detroit.

The Crumbleys are due back in court Feb. 8 for a preliminary examination.