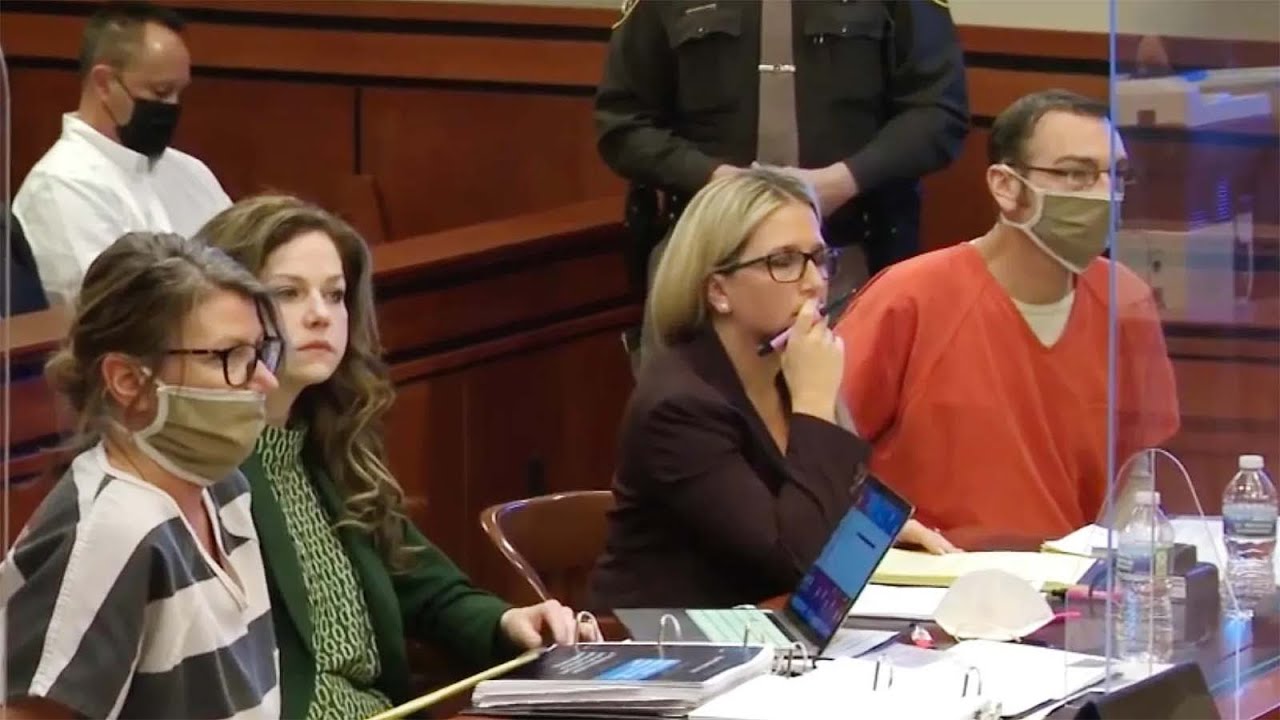 Rochester Hills — Oakland County prosecutors on Tuesday portrayed horses and marital problems as the focal points of an Oxford couple amid growing concern over their son's lack of relationships and his fascination with firearms and violence ahead of a shooting rampage.

Prosecutors contended James and Jennifer Crumbley failed to properly secure a gun purchased for their 15-year-old son, Ethan, and heed warning signs pointed out by school officials about his mental health a couple of hours before the deadly Nov. 30 shooting.

Jennifer Crumbley confided to coworkers and friends that her son had been lonely and "weird" and was without friends.

The details emerged Tuesday during a seven-hour preliminary examination for the parents in Rochester Hills District Court, where 52-3 District Court Judge Julie Nicholson will decide whether they stand trial. Jennifer and James Crumbley are charged with four counts each of involuntary manslaughter in connection with the deadly rampage.

Their son, the alleged shooter, faces 24 criminal charges, including murder and terrorism in the shooting that left four classmates dead and six others and a teacher injured.

In the aftermath, Jennifer Crumbley sent her friend, Kira Pennock, a text message, telling her "my son ruined so many lives today."

The comments came hours after Pennock said Jennifer had sent her a screenshot of a troubling drawing her son made on a math assignment. It resulted in a trip to the school for both parents.

Jennifer had told Pennock, the 25-year-old owner of a Metamora horse farm, that morning she'd had a "s--- day," and "just had to go to my son's school and meet his counselor."

"I was alarmed. I thought that was not normal," Pennock testified Tuesday. "All of the violence, all over the page."

Later the same day, Pennock said, she'd heard about the shooting after getting a call from another student's mom.

“My thought is that it was Ethan. I know they own guns and go out shooting, and that math test with everything written on it made me think it was him," she said.

Pennock was one of five witnesses who took the stand Tuesday during the opening day of testimony. Testimony painted a picture of Jennifer and James' panicked calls, text and social media messages as the shooting unfolded.

Defense attorney Shannon Smith noted during cross-examination that Pennock's friendship with Jennifer was limited to horses and small talk.

The day prior to the shooting, Jennifer Crumbley playfully admonished her son for being called to the office after he was caught in class searching for bullets on his cell phone and assured him he wasn't in trouble. The text message exchange between the mother and son was shared in the courtroom following a one-minute and 25-second voicemail left on the mother's phone by a school official about Ethan's trip to the office.

Ethan told his mother he was searching for bullets "because I was curious," describing his behavior as “completely harmless,” and arguing to his mother that his teacher had given him “no privacy.”

“This is nothing I should get in trouble about," he wrote to her.

Jennifer Crumbley assured her son he wasn't in trouble and asked him: "Did you at least show them a pic of your new gun?"

"No, I didn’t show them the pic. My god," he wrote back. "I only told them I went to the range with you on Saturday. ... I guess the teachers can’t keep their eyes off my screen."

“LOL I’m not mad," Jennifer Crumbley replied. "You have to learn how to not get caught."

Oakland County Prosecutor Karen McDonald said the couple bought their son a handgun as a Christmas gift and alleges they failed to properly secure the weapon or advise school officials of it after being called to the school just hours ahead of the shooting.

The couple, prosecutors said, refused to remove their son from school the day of the shooting, and he was sent back to class.

Testimony on Tuesday further revealed the Crumbleys had arrived at the school on the morning of Nov. 30 for a meeting over their son's drawing, which Jennifer Crumbley shared a screenshot of with Pennock and several coworkers. They stayed 13 minutes, according to video footage reviewed by police. The shooting began less than two hours later.

Andrew Smith, an attorney and the chief operations officer for a real estate company where Jennifer Crumbley worked as a marketing director, also testified he'd received a text from Jennifer the morning of the shooting informing him of the trip to the school and the drawing.

Around noon, he said, she'd returned to work and was in the copy room. She mentioned to him that her son needed counseling, he said, and "I think she said she felt like she was failing him, or a failure."

He later heard her "screaming down the hallway" that there was an active shooter at Ethan's school. She left and texted Smith just before 1:30 p.m. to inform him "the gun is gone and so are the bullets," he said.

“Ethan did it,” Jennifer added in another text. “I need my job. Please don’t judge me for what my son did.”

Smith testified he was "surprised" and "alarmed" by her text message. “I was surprised she was worried about her job at that point; I thought she would be more concerned about what was going on," he told the court.

Kathy Poliquin, a human resources manager for the company, then testified Jennifer Crumbley had been "hysterical" after the shooting.

Poliquin also noted that she, too, had seen the screenshot from Crumbley that Andrew Smith had pulled up on his phone of the drawings on Ethan Crumbley's math homework.

“My first thought was, this boy needs help," Poliquin said of Ethan.

Amanda Holland, an administrative assistant for Andrew Smith, said Jennifer Crumbley and her husband had marital issues and were contemplating a separation.

She testified that “both her (Jennifer) and James had been seeing other people."

Prosecutors and the defense team for the Crumbleys argued ahead of the planned exam whether the hearing should be postponed based on the volume of evidence and concerns about how much had been provided to the defense team and reviewed.

Nicholson noted the court allowed attorneys from both sides to meet for 45 minutes Tuesday morning and that the examination had previously been adjourned for six weeks.

McDonald also made a point Tuesday of asking Nicholson to order the Crumbleys to stop mouthing “I love you” to each other in court, arguing it's traumatic for the families of victims.

The judge warned the couple not to have communication with each other. "It's disrespectful and it's disruptive," she said.

The judge on Tuesday adjourned the preliminary examination to Feb. 24.

The Crumbleys, who are being held in the Oakland County Jail in lieu of $500,000 bond, each face up to 15 years in prison if they are convicted.

McDonald has described the parents as flight risks and previously told Nicholson that when the Crumbleys were arrested on Dec. 4, hiding inside a Detroit warehouse, they had $6,600 in cash, 10 credit cards and four cellphones. The parents, she said, also “drained” Ethan’s bank account of $3,000, leaving only 99 cents in the account.

Their son, if convicted, is facing up to life in prison.

When the hearing resumes in two weeks, Wagrowski will return to the stand as the prosecution will continue its case. Then the defense will make its case.

Nicholson will then decide whether the Crumbleys will stand trial.