Beneath the iconic arch at Hart Plaza on Thursday evening, Ayanna King cradled a sign with a message: “We all bleed red but whose blood is on the streets!?” 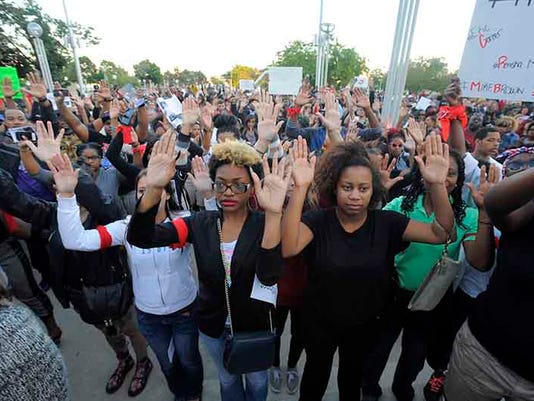 Detroit – — Beneath the iconic arch at Hart Plaza on Thursday evening, Ayanna King cradled a sign with a message: “We all bleed red but whose blood is on the streets!?”

A vigil and moment of silence came amid clashes between residents and police in Ferguson, Mo., over the death of Michael Brown, 18, which has sparked protests nationwide.

For protesters, speaking out was a way to remind others that injustice could affect anyone.

“What if that was your family member?” she said. “It might happen one day.”

The gathering was sponsored by the local arm of a National Moment of Silence “to honor victims of police brutality as well as those who have fallen due to racism, bigotry and intolerance” — including Renisha McBride, who was fatally shot last year on a Dearborn Heights porch, according to a Facebook page. Participants were urged to wear a band of red fabric as a show of solidarity.

Bearing handmade signs such as “Protect us, not kill us” while chanting “No justice, no peace,” activists, performance artists and others at the event called out for an end to what they perceived as unfair targeting by police.

“We’ve been quiet for years,” Whitney Syphax-Walker, an event organizer, told the crowd. “So many of us are tired of being quiet.”

The demonstration followed a shooting by Detroit police Wednesday.

A crowd gathered near Berkshire and Nottingham on Wednesday after Detroit police officers opened fire on a pair of men when they reportedly tried to run the officers down with their SUV. Police said the officers witnessed the men illegally purchasing a gun. One of the suspects was shot in the arm and taken to an area hospital. The other man was arrested.

In the wake of the incident, the crowd reportedly became unruly and other units were called in to help. Some in the crowd, upset because officers shot one of the suspects, reportedly invoked the situation in Ferguson, where tensions remain high after officers shot and killed Brown, who some witnesses said was unarmed and trying to surrender. Police there said Brown tried to grab an officer’s gun.

Wednesday in Detroit, one man crossed the yellow police line and allegedly tried to attack an officer, who used pepper spray to stop him. The man was taken into custody.

“My view is to keep dialogue with the community open,” he said Thursday morning. “There may have been some upset over Ferguson and expressed their frustration during our investigation (Wednesday).”

Meanwhile, the Detroit Police Department is nearing the end of federal oversight, which the city agreed to in 2003 to avoid lawsuits alleging police misconduct including brutality and deplorable conditions of confinement. Prior to the agreement, there were several shootings by officers that some say hadn’t been properly investigated.

Ron Scott, director of the Detroit Coalition Against Police Brutality, who was instrumental in bringing federal oversight to the city, said there’s still a rift between many residents and police.

“I think the situation in Ferguson could easily happen here,” he said. “We saw the tip of the iceberg last night, where the smallest thing could spark an incident. People feel disrespected, with the stop-and-frisk policy, and all these militarized raids.

“It happened in ’67, and it could happen now. I’m not advocating for it, but I’m just saying there’s tension in the street.”