Detroiters attend Water Fair in hopes of getting relief from shutoffs

Belinda Bradford, a 41-year-old mother of two, hasn’t had running water in her home for two months.

Detroiters attend Water Fair in hopes of getting relief from shutoffs 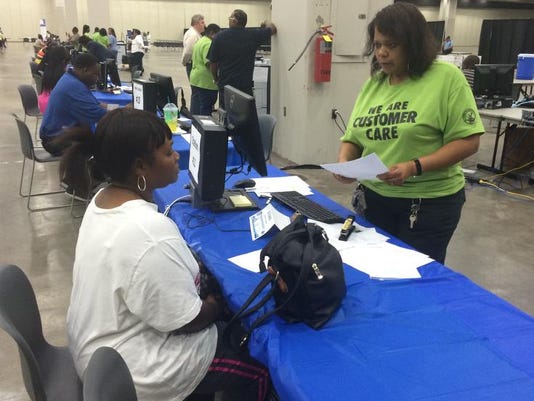 Maria Patterson, 42, signs up for a payment plan for her $515 water bill. “I think this is a good thing for the city,” she said of the Cobo event. (Photo: The Detroit News , Michael Martinez )Buy Photo

Belinda Bradford, a 41-year-old mother of two, hasn’t had running water in her home for two months.

The Detroit resident is behind $1,700 on her water bill and since June has had to visit family members to shower, use the bathroom and cook. Her children help her clean the house, but the toilets and sinks smell like sewage, she said.

Saturday morning, she got some relief.

Bradford was one of thousands expected at Saturday’s Cobo Water Fair, held by Mayor Mike Duggan, City Council President Brenda Jones and the Detroit Water and Sewerage Department. The event allowed customers to make payments on past-due bills, or at least set up a payment plan. Holds were placed on shutoff notices, and, as in Bradford’s case, water was turned back on for those able to pay.

“They helped me and my family,” she said as she left Cobo. “The water will probably be back on by the time we get home. I’m elated.”

City water officials have faced protests for cutting service for people who owe more than $150 or are at least two months behind on payments. A moratorium was placed on the shutoffs, but it expires Monday.

Despite her inability to pay, Bradford said she understood the shutoffs, which began in March.

“You have to pay your bills,” she said. “It’s a business. If you want free water, go live on the beach.”

Officials have said more than $89 million is owed in delinquent bills, including more than $43 million from 80,000 residential accounts.

To be eligible, a customer must have an outstanding balance between $300 and $1,000, maintain average water usage for their household size, and be enrolled in DTE’s Low Income Self-Sufficiency Plan or have an income at or below 150 percent of the federal poverty level. For a family of four, the threshold is $33,775.

Maria Patterson, 42, was among those enrolling in the payment plan. The city gave her two weeks to pay 10 percent of her $515 bill.

“I’m happy my water won’t be shut off,” she said as she left Cobo. “I think this is a good thing for the city. Mayor Duggan is fulfilling his end of the bargain by helping us.”

Since March, the department has shut off water to more than 17,000 Detroiters. More than half have had their water service restored after paying their bill or making payment arrangements, officials have said.

In recent weeks, Duggan’s office has taken over handling the water issue. As part of its plan, the city has pledged to provide better notice of impending water shutoffs. Bills will clearly explain the shutoff status and employees will put handbills on doorknobs a week before cutting off the water.

Ernest Wilson, 38, was hoping to be among that growing number Saturday. He was waiting in line with hundreds of others, hoping to set up a payment plan for the $1,000 water bill he can’t afford to pay. The father of four said the process has been stressful.

“It’s been kind of difficult to try to catch up with bills on top of bills,” Wilson said. “I think some relief is coming today.”

Separately on Saturday, United Auto Workers Local 551 plans to pass out gallon jugs of water at 15600 Grand River to those Detroiters whose water was been shut off. The rally will begin at 2 p.m.