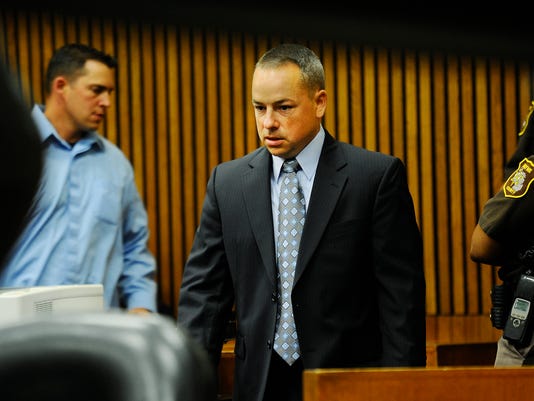 Detroit — For the second time, a mistrial was declared in the case of a Detroit police officer accused in the shooting death of a 7-year-old girl during a May 2010 police raid after a jury was unable to reach a verdict.

"These things happen. We would rather they didn't happen, but it's not something we are unfamiliar with." Wayne Circuit Judge Cynthia Gray Hathaway said Friday.

The jury at Officer Joseph Weekley's retrial told the court it was deadlocked twice Friday. The judge urged them to continue deliberations after the jurors sent an initial message to the court Friday afternoon, saying: "Judge Hathaway, we are stalemated over the same things as we were on Wednesday. We have discussed this from every possible angle and are unable to come to a unanimous decision. "

A mistrial for Weekley, accused of killing Aiyana Stanley-Jones when he entered her home during a May 2010 raid that was being filmed for television, was also declared in June 2013 after no verdict could be reached.

"Please return to the jury room ... and try to reach an agreement if you can do so without violating your own judgment," Hathaway told the jury Friday.

Less than a hour later, the trial ended in mistrial after the jury said it was again unable to reach a verdict.

This jury only had to weigh a misdemeanor charge of careless discharge of a weapon causing death after a ruling last week by Hathaway dismissed an involuntary manslaughter charge. The manslaughter charge carried a maximum sentence of 15 years in prison.

The directed verdict by Hathaway was upheld by the Michigan Court of Appeals.

The misdemeanor charge carries a maximum penalty of a $2,000 fine and two years in prison.

On Thursday, jurors sent two notes to Hathaway, one asking for a break and another asking to look at a video of the raid where Aiyana was killed and other evidence. That followed a request Wednesday to see the video and evidence. Jurors indicated at the end of Wednesday's deliberations that they were struggling to make a unanimous decision. Hathaway told them Thursday to try to work through their differences.

Weekley said in a statement Friday before the decision that his life will never be the same.

"No matter the outcome of any jury's decision, I have already been devastated and my life has been ruined irreparably by the events that occurred on May 16, 2010," Weekley said.

"There has not been one single day that has gone by since that day where I have not thought about the loss of Aiyana, and I will be haunted by this tragedy for the rest of my life. No family ever deserves to lose a child, and I have nothing but sympathy for the family of Aiyana Jones.

"No parent ever deserves to lose a child, regardless of the circumstances. I know in my heart and before God that what transpired that day was out of my control, but I will still have terrible grief weigh upon me every day for the rest of my life."

Weekley has said the girl's grandmother, Mertilla Jones, slapped at his submachine gun, causing him to accidentally shoot Aiyana.

Jones has testified that Weekley walked into the house on Lillibridge, put his gun to the sleeping girl's head, and shot her execution-style on the living room couch. The officer's attorney, Steve Fishman, insisted Tuesday that Jones was not telling the truth.

Prosecutors argued that Weekley failed to use proper care for safety because he kept his finger on the trigger, which police are trained not to do.

Prosecutors have said the shooting was an accident, but say Weekley was negligent because he kept his finger on the trigger of his gun, causing it to fire.

"It's sad that it came down to this again," Aiyana's great-uncle Londell Fields said. "It's a travesty. I don't understand how we can go through this again ... and not be a verdict either way.

"I think that Mr. Weekley should apologize, and just say he made a mistake. I don't think that it's fair because he's a police officer that he gets to get away with this again. The mom is hurt again. She don't want to go through it again. Whatever happens today, she wants it to be over with. There's nothing left to be said about it; it's done."

After failing to reach a verdict after four days of deliberations, jurors met with reporters in the jury room.

Hathaway, who said this case has been the longest she's presided over in more than 20 years on the bench, advised them not to release their names.

The jury foreman, a minister, said it was a difficult decision. After three votes, he said the result was: Five voted guilty, seven not guilty.

"This was an emotional case," he said, his voice catching. "There were tears in this room. I think we all felt this deeply.

"It really came down to the definition of 'negligence.' Three words were separated by 'or' – careless, reckless or negligence. We really wrestled with the language. We spent an endless amount of time talking about the difference between ordinary and slight negligence."

When asked if race played a part in their deliberations, several jurors quickly insisted it hadn't.

"That wasn't even an issue," one said.

One juror said those who thought Weekley was guilty felt he should have controlled his weapon.

"They go through all that training and are supposed to have muscle memory," one man said.

Afterward, Detroit Coalition Against Police Brutality director Ron Scott said he was upset with the outcome.

"This is a defining moment in the history of Detroit," he said. "There has to be some justice for Aiyana Jones."

"This multi-racial, multi-ethnic jury did the very best they could to reach a verdict in this case," said Fishman, Weekley's attorney, in an email. "Officer Weekley and I thank them for their service and commend them on their efforts. This case has now been before two juries, once on a felony charge and once on a misdemeanor charge, and neither of them have been able to reach a verdict. In my opinion, twice is enough. The case should be dismissed."