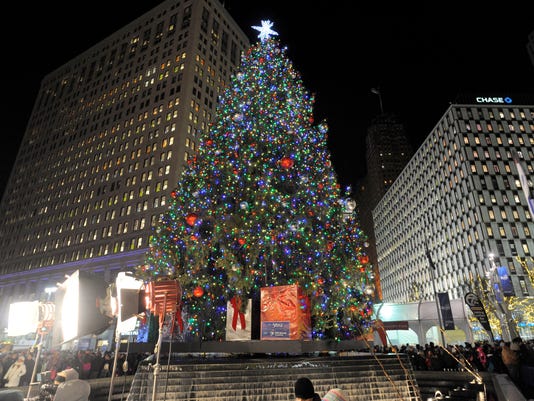 The 60-foot Norway spruce is aglow on Friday, Nov. 21, 2014, during the annual tree-lighting event in Campus Maritus Park in Detroit.(Photo: Steve Perez, The Detroit News)Buy Photo

The 60-foot Norway spruce is aglow on Friday, Nov. 21, 2014, during the annual tree-lighting event in Campus Maritus Park in Detroit. Steve Perez, The Detroit News
Fullscreen

Skaters from the Arctic Figure Skating Club from Canton take to the ice. Steve Perez, The Detroit News
Fullscreen

Members of the Creative Edge skating team prepared to head out on the ice. Steve Perez, The Detroit News
Fullscreen

Emma Belveal of Canton warms up by the fire after performing with the Arctic Figure Skating Club of Canton. Steve Perez, The Detroit News
Fullscreen

"We love it — the people, the crowd, " said Westland resident Shonna Thomas of the annual tree-lighting event. "Even though it's cold, people are out here. It's a cool time in the D."

Thomas and her two children, Sasha, 9, and Eric, 19 months, were among the hundreds that came to see the brightly lit tree during the event, in its 11th year. The tree, a Norway spruce, was harvested in Cadillac and provided by anonymous private owners.

The cold weather didn't stop the crowd filled with families and friends from enjoying the musical entertainment and ice skating performances. But some avoided spending much time in the cold by gathering around the Christmas tree just minutes before it was lit at 7:45 p.m.

Chelsey Paksi of Detroit and her sister, Jenn Paksi, of Madison Heights posed in front of the Christmas tree as Jenn Paksi's boyfriend, Alex Nash, took their photo.

"We wanted to celebrate Christmas and see the tree lighting," said Chelsea Paksi, who invited her sister and Nash to the event for the first time. "I told them it's a lot of fun, very busy. It kicks off our Christmas season."

Among the event's entertainment was "American Idol" runner up Jena Irene and the Second Ebenezer Mass Choir.

The tree-lighting ceremony marks the beginning of the rink season.

Sam and Nikki Tickle of Monroe brought their three daughters, Samantha, 14, Addison, 3 and Skyla, 8, to see the lighting for the first time.

"It's pretty," Samantha said of the lights decorating Campus Martius.

Sam Tickle said he didn't know there would be entertainment or the various activity booths around Campus Martius. The family ate dinner and visited the Santa workshop in the First National building where, for a $5 donation, children could shop for Christmas gifts.