Tim Idzikowski of the Detroit BBQ Company slices up brisket in the Pride Plaza before a Detroit Lions game at Ford Field in Detroit on Sept. 8, 2013.(Photo: Detroit News file)

Detroit — The owner of a popular food truck and catering business apologized Monday evening for Facebook comments he made about the slayings of two New York City police officers.

Those comments had caused a firestorm in Detroit's law enforcement community, which viewed them as hostile and urged a boycott of his food business. At least one Metro Detroit business distanced itself from the company.

Tim Idzikowski, owner of the Detroit BBQ Co., said he expressed his "deepest condolences and apology" for his comments "made out of frustration."

Hours after officers Rafael Ramos and Wenjian Liu were gunned down in Brooklyn Saturday, Idzikowski posted on his personal Facebook page: "How many times did they think they were going to kick the hornets (sic) nest before they got stung? These guys 'can't breathe' now either."

The post appeared above a link to a news story about the ambush and spread quickly on social media sites among area law enforcement officers.

"I want to express my deepest condolences and apology to the families of the fallen New York City police officers — senselessly killed last week; and the entire police community of officers who faithfully serve and protect in New York City, in Detroit and across our communities," Idzikowski said in an emailed statement.

"In no way do I believe or condone violence against police officers ... . I was trying to express a thought questioning at what lengths could the growing negative sentiment between some communities and the police continue before seeing more violence.

"I regret and apologize for the insensitive manner in which my comments appeared on Facebook. It was a momentary lapse in judgment and in poor taste."

His "I can't breathe" comment was a reference to the death in New York of Eric Garner, who uttered those words after police wrestled him to the ground in a chokehold. He later died of a heart attack.

The man who killed the two officers Saturday before committing suicide, identified as Ismaaiyl Brinsley, wrote on Instagram that he planned the crime to avenge the deaths of Garner and Michael Brown, a teen who was fatally shot by a police officer after a reported struggle in Ferguson, Missouri. Both incidents set off protests nationwide.

After officers criticized Idzikowski on Facebook for his initial post, he responded: "2 cops get killed and it's a (expletive) tragedy but you guys can run around killing people without fear of any reprisals because of your (expletive) badge and it's business as usual?"

During a telephone interview Monday, Idzikowski, whose company caters several high-profile events and whose truck is often parked in downtown Detroit at lunchtime, said: "I got over 20 death threats on my voice mail. I've contacted an attorney, and we're going to file harassment charges against the officer who posted my personal information (online)."

Detroit Police Chief James Craig said he'd heard of no threats made to Idzikowski. "If he feels threatened, he can make out a police report and we'll look into it," the chief said.

When Idzikowski was asked if he wanted to clarify or expand on his Facebook comments, he said he was bothered by a photograph of New York police officers wearing T-shirts bearing the message "I can breathe."

"I thought they were mocking (Garner)," he said.

"This guy is well within his right to say what he wants, since this is America, and we have free speech," Diaz said prior to the apology. "But we're also within our rights to say we don't want to spend our money at his place of business."

Reacting to the news of the apology, Diaz said Monday night: "I'm happy that he recognizes the impact his words had and they were in fact hurtful for a great many people. I'd like to see him become a part of the solution as opposed to a part of the problem. ... Our arms are wide open for him to become a positive role model in the community and work with the police."

Warren-based Kuhnhenn Brewing Co., which allowed the Detroit BBQ Co. to sell food at its brewery on Chicago Road near Mound, posted on its Facebook page Monday: "Dear fans and supporters. Detroit BBQ Company will not be providing food here onsite at the brewery for the time being. Please remember that we are businesses independent of one another."

Even though Idzikowski made his comments on his personal Facebook page, it reflected on his business, said Charlie Wollborg, owner of Curve, a Pontiac marketing firm that advises clients on social media protocol.

"The line between personal and professional hasn't just been blurred; it's been erased," Wollborg said. "If you own a company, you will always be associated with it. You're part of the brand.

"Social media should come with a Miranda warning: Anything you post can and will be used against you."

"It's very disheartening," the police chief said. "I'm troubled by the statement 'Now the police can't breathe either.' That was the same statement made by the rapper The Game, and he's a guy a lot of young people listen to."

In a message to The Detroit News Monday, Idzikowski said he has done charitable work on behalf of police organizations. "I have donated to the Grosse Pointe Police 'shop with a cop' program for needy children for the last three years running," he wrote.

"With so much pain and sadness going on, it's sad to see anyone, much less a local Detroit business owner, celebrate the death of another human being as justification for a particular side," Tosqui said. "There are no sides in this. All lives matter.

"I'm just glad for the men and women of our great city that this business owner does not represent the feelings of most Detroiters, who in my experience have embraced their officers in support." 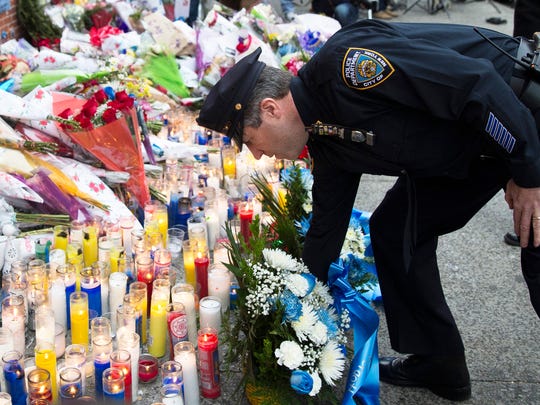