Show goes on for ‘The Interview’

Show goes on for ‘The Interview’ 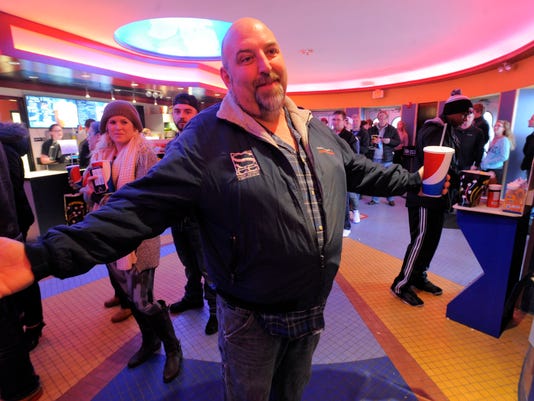 Bud Minor of Wayne speaks of the movie "The Interview," after watching it, Chirstmas Day, Dec. 25, 2014, at the State Wayne Phoenix Theater in Wayne.(Photo: Steve Perez / The Detroit News)Buy Photo

Wayne — After a week’s worth of controversy, confusion, terrorism threats and commentary on free speech that even prompted a response from President Barack Obama, Sony Pictures’ movie “The Interview” opened at select theaters across Michigan Thursday and the verdict is in — “It’s just a movie.”

At least that’s how Jason Fairchild of Westland felt after seeing the film Christmas day at the State Wayne Phoenix Theaters, one of the few locations where the film is playing on its regularly scheduled release date.

“It’s just a simple movie,” said Fairchild. “And it was funny.”

The release of the film at a handful of theaters across Michigan – as well as online streaming of the film – was an unprecedented counterstroke against the hackers who spoiled the Christmas opening of the comedy depicting the assassination of North Korean leader Kim Jong Un.

Cory Jacobson, owner of the four-room independent theater in Wayne, said he decided he had to screen the film when he heard so many people decrying that they wouldn’t be able to see it.

“We’re out here in the marketplace of ideas, that’s what this is about, creativity,” said Jacobson. “When people are trying to stifle that creativity, I don’t think that’s a good idea.”

So Jacobson beefed up security just in case and scheduled five showings a day.

“I think a lot of the threats are baseless, but on the other hand, a little concern is necessary,” he said. “My No. 1 priority is making sure my employees and customers are safe.”

In addition to the theater in Wayne, also showing the movie are The Bijou, Michael Moore’s theater in Traverse City, Cloverland Cinemas in Ironwood and the State Theater and Quality 16 theaters in Ann Arbor. In a Facebook post, Moore says it’s always important to “stand against bullies and censors.”

The West River Theatre in Farmington Hills will screen the movie Friday and the Emagine Canton will offer a free, one-week run of the movie beginning Wednesday. Tickets are first-come, first-served.

Sony originally canceled the release of the Seth Rogen and James Franco comedy after the studio was hit by hackers and there were threats of terrorism against theaters that planned to show the film.

But with Obama among others criticizing that decision, Sony officials changed their minds. “The Interview” became available on a variety of digital platforms Wednesday afternoon, including Google Play, YouTube Movies, Microsoft’s Xbox Video and a separate Sony website. Meanwhile, Sony and independent theaters agreed to release it in more than 300 venues nationwide on Christmas.

The back story of “The Interview” has itself played out like a Hollywood satire, in which a cartoonish farce distracts from some of the holiday season’s most prestigious films: “Selma,” the drama about the 1965 civil rights march; Angelina Jolie’s adaptation of the best-selling World War II story “Unbroken,” and the all-star, big-screen version of Stephen Sondheim’s “Into the Woods.”

The possibility of violence was taken more seriously by the movie industry than by government officials. Last week, the Department of Homeland Security released a statement saying there were no credible threats. Meanwhile, Darrell Foxworth, a special agent for the FBI in San Diego, said Wednesday the agency was sharing information with independent movie theater owners showing “The Interview” out of “an abundance of caution” and to educate them about cyber threats and what help the FBI can offer.

Kim Song, a North Korean diplomat to the United Nations, condemned the release Wednesday, calling the movie an “unpardonable mockery of our sovereignty and dignity of our supreme leader.” But Kim said North Korea will likely limit its response to condemnation, with no “physical reaction.”

Bud Minor, who was among those who saw the movie Thursday, said the hype wasn’t worth it but he’s glad some theaters were standing up to the threats.

“I really don’t get it,” he said. “It was great they showed it. It shows that you just can’t stop us from seeing things.”

Across the country, many of the venues showing “The Interview” would be the kind more likely to feature documentaries about North Korea than a low-brow comedy about it.

At the Jean Cocteau Cinema in Santa Fe, New Mexico, owned by “Game of Thrones” author George RR Martin, the schedule also includes the Spanish art-house release “Flamenco,” the locally made “The Twilight Angel” and an Italian film festival. The Film Society of Lincoln Center, which begins screening “The Interview” on Friday, will soon be hosting a tribute to “Force Majeure” director Ruben Ostlund of Sweden and a documentary about the late Nobel laureate Isaac Bashevis Singer.

Rogen, who stars in the film he co-directed with Evan Goldberg, cheered the decision to release it.

“I need to say that a comedy is best viewed in a theater full of people, so if you can, I’d watch it like that. Or call some friends over,” he tweeted.

It was unclear whether the company will recoup the $40 million cost of the film and the millions more spent on marketing by deciding to release it online through affordable formats.

One of Sony’s harshest critics was Obama, who chastised the studio for what he deemed “a mistake” that was contrary to American principles of free speech.

As for moviegoers, like the Borg family from Wayne, “The Interview” was just a funny film they could go see as a family after their traditional Christmas breakfast.

“In this country there is free speech and the minute you try to have that, something like this happens,” added her mother, Michelle. “If you don’t want to see it, don’t see it.”